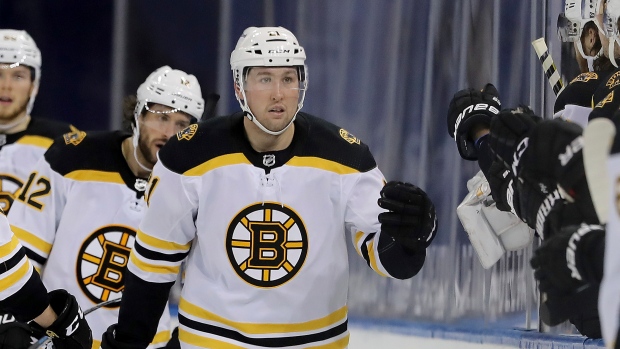 TSN Toronto Reporter Mark Masters reports on the Maple Leafs, who practised in two groups at the Ford Performance Centre on Thursday.

Nick Ritchie is getting the first chance to win the vacant left wing job on Toronto's top line. The Orangeville, Ont., native skated alongside Mitch Marner in the first on-ice session at training camp.

"We like some of the elements that Nick can bring there in terms of his size, skill-set and ability to play around the net, the physicality that he brings and the presence that he brings," said coach Sheldon Keefe. "We like a lot of those different elements so we'll look to give that some time to grow."

"Hopefully I can put myself in a position to play with those guys," said Ritchie, who stands 6-foot-3, 236 pounds. "[Mitch is] a pretty awesome athlete. He's looking really good so far. It's a big year for everyone and it looks like he's on the right track."

Ritchie scored a career-high 15 goals last season with Boston, but didn't receive a qualifying offer from the Bruins and became an unrestricted free agent. After Zach Hyman signed in Edmonton, the Leafs looked for candidates to help fill the void and eventually signed Ritchie to a two-year, $5-million contract.

"He's a big body," veteran forward Jason Spezza observed. "He wins pucks in the corners. He's got sneaky soft hands around the net and makes great little three-to-five-foot plays. He thinks the game really well. There's a lot of different roles he could play. At times he can probably play up with the big boys. At times, he can play on a more physical line. He's a guy that will get used in a lot of different ways and be valuable. Plus, he brings that physical element. When he's on the ice, guys know and when Nick Ritchie hits you, you feel it a little more than most guys. I know from experience (smile) so it's good to have him on our side."

Keefe said the "potential is strong" for Ritchie to stick with the big boys to start.

Has Ritchie experienced a welcome-to-the-Leafs moment?

"Maybe the conditioning drill," he said with a small smile.

Like last year, Keefe opened the first practice of the season with 20 minutes of skating.

"It's a very difficult thing, I recognize that, and I like leading with that," the coach explained. "The season's hard, winning's hard, playing in the league is hard, so put the hard work first."

Players were doubled over trying to catch their breath between reps. Some guys lay flat on the ice or on the bench.

"It's incredibly hard," said Spezza. "There's no bones about it. You train all summer, but to go full speed like that and have as little rest as we had, this is one of the harder days you're going to get anywhere."

"I would've liked you guys to try that," said defenceman Rasmus Sandin with a laugh. "It's tough, I'll tell you that."

"You're looking to see effort. It's more of a mental drill than anything. The physical piece, of course, is there, but the mental side is the most challenging piece as you're going through that and questioning yourself and just how much you have left."

Spezza, 38, skated on a line with top prospect Nick Robertson, 20, at practice.

"For Robbie, a big thing is playing within the structure of the team, using his linemates," said Spezza, who applauded Robertson for a strong performance at the recent rookie tournament in Traverse City. "We all know the physical tools are there. He's a great kid, has a great mindset and wants to work hard and wants to learn and sometimes he's got to use the guys around him and we'll help him with that. That's the next step for him."

Robertson cracked the Leafs playoff roster in the bubble in 2020, but only appeared in six games during an injury-plagued 2021 season.

"I appreciate how hard he works and how bad he wants it," said Spezza. "Sometimes he has to just slow down and use everybody around him and know there's good players with him. He'll learn that."

Did Ilya Mikheyev ask for a trade in the summer?

"No," the Russian winger said. "I just enjoy time with my family and just [got] married. A busy time."

Mikheyev averaged 14 minutes and 13 seconds of ice time per game last season. Is he looking for a bigger role with the Leafs?

"I look forward to upcoming season and work hard for team and I hope to have a great season."

How can he do that?

Mikheyev was more expansive when asked about his off-season work. He focused on preparing himself physically for the rigours of an 82-game season, which he's never experienced before. Mikheyev suited up in 62 games, a career high, with Omsk Avangard in the KHL during the 2018-19 season.

"I think I'm ready because I played two years here in the NHL and I know how it works and the organization and it's much easier."

Mikheyev opened camp on a line with Alex Kerfoot and William Nylander.

Josh Ho-Sang is getting what he calls "an amazing opportunity" early in training camp. On Thursday, he skated on a line with captain John Tavares and Michael Bunting. Ho-Sang, a first round pick of the Islanders in 2014, played in Sweden last year and is attending Toronto's camp on a pro tryout.

"Every kid who grows up in Toronto dreams about playing for this team," Ho-Sang said. "It's really special to be able to put on this uniform every day."

During a lengthy media session on Thursday, the 25-year-old from Toronto opened up about the struggles he's faced in recent years. The following is an edited transcript of the conversation.

What will it take to make this team?

"It's going to take everything I have. I think it's pretty simple. I'm coming here to work to the best of my ability, to try and learn as quickly as I can and give that maximum effort that they're looking for. The message throughout the organization is hunger. Everyone is hungry to do better, to be better and you see it from the top down. Every player comes in and they work and they put in their best effort every single day. I've definitely developed a new appreciation for every single player on the Toronto Maple Leafs."

What do you want to show Keefe? Any particular part of your game?

What have you learned from the challenges you've faced so far in your career?

"You learn a lot. You know, nothing's given in this world. All of you know that. Everyone who's working a nine-to-five job, they understand you have to give it your best effort every day or you won't move forward. For me, I've learned a lot from the things I've been through. I've had a lot of great mentors. It's not necessarily how long it takes you to learn, it's that you learn and I feel like I've embodied a lot of things and I try to use them in my day-to-day."

Who have you leaned on as a mentor in recent years?

"[Islanders general manager] Lou Lamoriello was amazing. I know things didn't work out quite the way I wanted in New York, but he's a great man. He has his core values. His beliefs are exceptional. I mean, you've seen what he's accomplished in his life. His son, [Islanders assistant general manager] Chris Lamoriello is an absolutely incredible individual. He has spent so much time with me and we had a lot of good conversations about life and the things that I need to focus on.

"There's so many people I could list, but I would like to say a big, 'Thank you,' to the people in Linkopings. The GM and the head coach there now, they did wonders for me as a person. I'm not going to get too much into what we talked about, but the head coach in Sweden changed my life, changed my outlook on hockey and sometimes you need to get to a new environment to really appreciate some of the things that have been said to you your entire life. Sometimes we're not ready to hear things and I believe now I'm at the point where I am."

"I loved Sweden. The people in Sweden are so kind. Anyone who hasn't been there, I recommend that you get on a flight and check it out, because that place is beautiful. The people are so kind. They speak English better than we do. It's amazing. They're all very intelligent. Education is highly regarded there. It's an impressive, impressive place. So, like I said, anyone who hasn't been, it's a great destination. I know it's not the first one that comes to mind, but it should be."

What was it like growing up a Leafs fan?

"I loved Mats Sundin. He was definitely the most prominent guy for me growing up. You see how someone like that has such a great career, plays in Toronto for so long and never got in trouble, never did anything bad. He embodied what it meant to be a true professional and I've reflected on that and tried to take parts from him and implement them into my life."

Did your love of the game get challenged during the tough times in recent years?

"Absolutely. Everyone deals with anxiety and depression in different manners and some people have it more severe than others, but when that stuff creeps in it can get difficult to love the game. But that's when you have to go back to your roots. I do believe we're in a very unique position where we get to play the game we love ... When you bring it back to the base, that this is the game you've been playing since you were little, and how much joy it's brought you, how many good experiences you've had, how much you've learned, I think that when you take that and appreciate that instead of looking at what you don't have, I think it becomes a lot more enjoyable."

Would you be willing to start in the minors?

"I'd be willing to start in the East Coast [League] ... I'm not entitled by any means. I don't think that I deserve anything here. For me, I'm happy to be a part of this organization in any way they need me, if they need me sharpening skates, if they need me taping sticks. Like, this place is so special and [not] everyone gets to experience that. This place is absolutely wonderful."