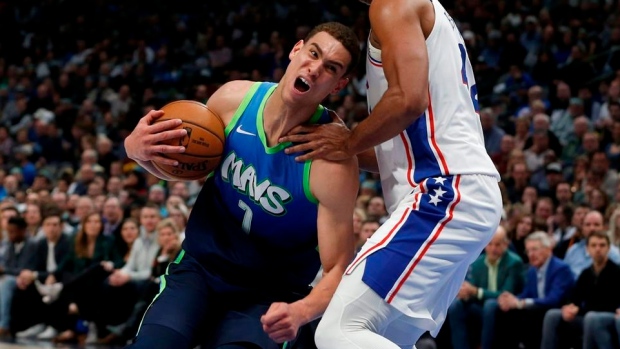 Dwight Powell was enjoying a season unlike any other.

His Dallas Mavericks were on a path for the NBA playoffs - finally - and Powell was excited about playing a key role in Canada's quest for a men's basketball spot at the Tokyo Olympics.

But a season that had held so much promise evaporated in the instant Powell pushed off his right foot in a Jan. 21 game against the Los Angeles Clippers and ruptured his Achilles tendon.

"The season that we had here in Dallas up to my injury, as well as up to this (COVID-19) virus situation, it was really tough for me to not be participating because of the years we've had where we weren't in playoff contention, and we were at the bottom of the ladder," Powell said. "So to have some success this year, it was really tough to get injured.

"Then at the same time realizing how long a rehab would be and how far into the summer I would be until I could actually compete safely, the next thing that hit me was that my chances of helping Canada make it to the Olympics and then compete potentially in the Olympics was not really realistic anymore. That was definitely a devastating realization."

The 28-year-old forward from Toronto was averaging 9.4 points on a blistering 71.6 per cent shooting, and started in all but three of his 40 games this season.

But he'd been on the floor less than three minutes against the Clippers when he pushed off his heel to dribble in a seemingly innocuous moment and his right Achilles snapped. The gruesome moment his Achilles popped and recoiled was captured on slow-motion replay.

"I knew what it was pretty much right away," Powell said in a phone interview from Dallas. "I heard the stories from J.J. (Barea of Dallas) and from Wes Matthews (Milwaukee), how it feels like somebody kicked you or somebody threw something at you.

"It wasn't painful, but I knew that shocking feeling and that inclination to want to look back behind me and see no one there — before anyone even came out to the court, I knew my Achilles had popped. Then I tried to peddle my foot and realized it detached completely."

The six-foot-10 forward didn't dwell on the negative. Powell watched the second half of the game from the locker room, and drew inspiration from Barea, who'd been distraught watching his teammate being helped off the floor.

The veteran Mavs guard had ruptured his Achilles almost exactly a year earlier and was back at full health to start this season.

"In my head, I was like 'It's gonna be a long road, but J.J. did it and I'm watching him play and he's playing great and enjoying the game again, doing the thing that he loves out there,'" Powell said. "I think that night I held that image in my head, and it helped me move on to the next thing which was being healthy for the surgery and now the rehab."

Powell's energy and productivity in the paint had made him a critical piece on a Mavericks team that was seventh in the Western Conference (40-27) when the league was suspended, poised for its first playoff appearance since 2016. The Mavs haven't won a post-season series since 2011 when they beat the Miami Heat to win the NBA finals.

Powell was also expected to be a cornerstone for Canada at its last-chance Olympic qualifying tournament June 23-28 in Victoria, particularly with doubts about the availability, due to their NBA contract status, of forwards Tristan Thompson and Kelly Olynyk.

With COVID-19 forcing the Tokyo Olympics to be postponed a year, Victoria is expected to host next year's tournament, and Powell is excited about the opportunity to be there.

"It's unfortunate the circumstances that have led to the postponement of the Olympics, and hopefully it doesn't get postponed any further, hopefully things will be back to normal far, far before then, and knock on wood all of our guys remain healthy through this strange period and then through the season to come," he said. "But I'm definitely looking forward to having that opportunity, God willing I'm healthy still at that point, to compete for the country."

Dr. Bob Anderson performed surgery — a less-invasive percutaneous repair that involves a smaller incision — in Green Bay, Wisc., a week after his injury. He was completely off his feet for a month, and then slowly added weight bearing to where he's now off crutches and is doing pool walking for rehab but is still in a walking boot.

The Stanford University grad said the league's suspension amid the global COVID-19 pandemic has been surreal. Powell had already been in semi-isolation because he wasn't travelling with the Mavericks.

"It's tough," he said. "The game is such a huge part of what we all are. We definitely identify a part of who we are with this game and we spend so much time with each other as teammates on and off the road and long hours in the gym, so to have that kind of abrupt separation is definitely strange."

Powell, who's become one of the most popular Mavs players in is five-plus seasons in Dallas, is making the most of his downtown.

Powell, teammate Luka Doncic and Mavs owner Mark Cuban donated US$500,000 earlier this month to pay for the daycare for the children of front-line responders at two Dallas hospitals: University of Texas Southwestern Medical Center and Parkland Hospital.

"We want to make sure that their families were looked after appropriately and there wasn't any kind of secondary tragedies there," Powell said.

He also did FaceTime visits earlier this week, reading stories and playing virtual bingo with kids at a Dallas children's hospital.

"I've been just trying to stay connected with the community as much as possible."