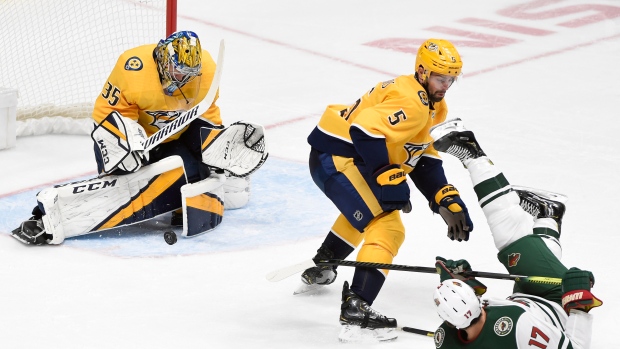 NASHVILLE — The way Pekka Rinne was playing, the Predators' slow start was irrelevant.

Rinne made 26 saves, Colton Sissons had a goal and an assist and Nashville beat the Minnesota Wild 4-0 on Thursday night.

The shutout was Rinne's first of the season and 56th of his career. He improved his record on the season to 6-0-1, the second-best season-opening run in franchise history after Tomas Vokoun, who started 7-0-1 in 2005-06.

Rinne's best sequence came late in the first period, with the game scoreless.

With 1:09 remaining in the first, Rinne turned aside a backhand shot from Jason Zucker and then denied Mikko Koivu's attempt at the rebound from just outside the crease.

"Anytime you feel like as a team you're not playing to your potential, I think as a goalie it feels good to be able to help your teammates," Rinne said. "I feel like there were a few situations in the first where I made some good saves and was able to keep the game nothing-nothing. After that, I feel like we improved a lot."

Most of the first period was played in the Predators' end of the ice. Rinne stopped all 13 Minnesota shots he faced in the opening period.

"It was kind of a tale of two periods," Nashville coach Peter Laviolette said. "The first period, I think we gave up a little bit too much. They had us on our heels a little bit. In the second and third periods, I thought we did a much better job just competing on pucks, skating and playing in the offensive zone."

Sissons carried the puck into the Minnesota zone on the right side. Sissons left a drop pass for Salomaki in the right circle, where he beat Wild goaltender Alex Stalock with a wrist shot high to the far side.

"I knew he was coming up with me, in behind me on the rush, and he did a good job of letting me know where he was," Sissons said of Salomaki. "So I just kind of had to lay it there for him."

It was Salomaki's first goal of the season. The Finnish winger began the season with Milwaukee of the AHL but played his third consecutive game since being recalled.

Nashville broke through on just its fifth shot of the game.

"We talked about it in between periods, about coming out the same way," Minnesota defenceman Jared Spurgeon said. "Obviously to get an early one against isn't what you want."

Jarnkrok made it 2-0 with 28 seconds remaining in the second.

After taking a pass from Viktor Arvidsson at the top of the right circle, Jarnkrok beat Stalock with a wrist shot that went off of the far post and into the net for his second goal of the season.

"It's a deflator when they score in the first minute and the last minute of the period," Minnesota coach Bruce Boudreau said.

Smith scored his first of the season at 6:58 of the third off assists from Nick Bonino and Rocco Grimaldi.