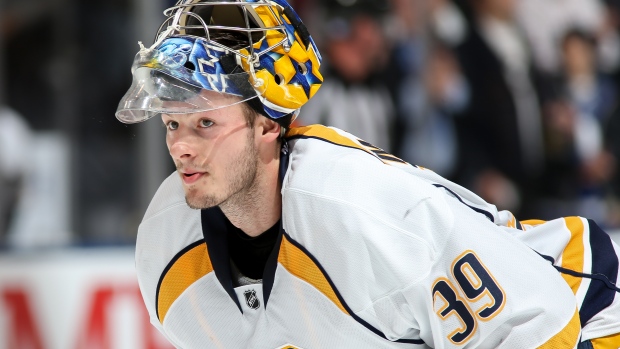 Nashville Predators goaltender Marek Mazanec has signed with HC Slovan Bratislava of the KHL less than a month after reaching a one-year extension with the Predators.

According to a release by the KHL club, Mazanec and the Predators mutually agreed to void the one-year, two-way contract signed on July 21. The deal, which allowed the two sides to avoid arbitration, would have been worth $650,000 at the NHL level and $100,000 in the AHL.

The 26-year-old made two starts and appeared in four games with the Predators last season, posting an 0-2 record with a 4.72 goals against average and a .839 save percentage. He's appeared in just six NHL contests after playing 25 games as rookie during the 2013-14 season.

Juuse Saros is slated is serve as Pekka Rinne's backup again this season after appearing in 21 games last year. Saros posted a 10-8-3 record with a 2.35 goals against average and a .923 save percentage.

Mazanec, a native of Pisek, Czech Republic, posted a 27-17-1 record at the AHL level with the Milwaukee Admirals last season.

Mazanec was a sixth-round pick of the Predators in 2012.