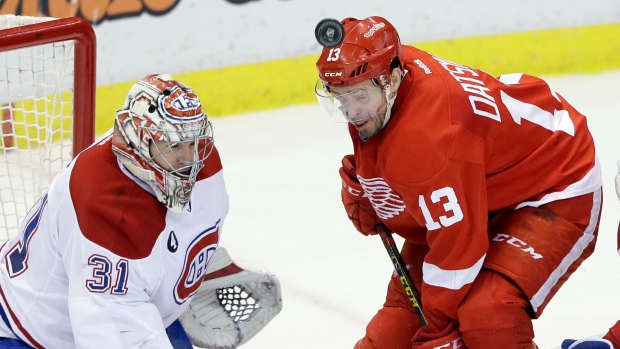 DETROIT - There were plenty of blocked shots and precious few scoring chances. To the Montreal Canadiens and Detroit Red Wings, this one felt like a playoff game.

Tomas Plekanec snapped a scoreless tie with 2:30 remaining and Carey Price made 25 saves in his fifth shutout of the season Monday night, propelling the Canadiens to a 2-0 victory over the Red Wings.

Plekanec's slap shot got past Jimmy Howard for his 17th goal of the season. Max Pacioretty, who assisted on the first goal, added an empty-netter in the closing seconds with an assist from Plekanec.

Plekanec came off the bench shortly before Pacioretty sent the puck his way for the game-winner.

"I saw it was wide open in the middle of the ice and just tried to put myself in the best position to put it in the net," Plekanec said.

He did, and guaranteed the Canadiens would continue a brief road trip with the Atlantic Division lead. Montreal, which began the night tied atop the standings with Tampa Bay, stretched its lead to six points over Detroit.

Howard, making his second start since missing five weeks with a groin injury, stopped 27 shots as the Red Wings dropped their third straight. They have lost all three games against the Canadiens this season.

Detroit defenceman Jonathan Ericsson lost his stick, and the puck, in front of Howard early in the third period and Pacioretty gained possession, but his point-blank shot was wide.

Pavel Datsyuk and Gustav Nyquist had swipes at the puck near a prone Price later in the period, but the game stayed scoreless into the final minutes.

It helped that his teammates didn't allow many good chances.

"I always tell the players to make sure they're in the shooting lanes, make sure they protect the house and keep teams on the outside," Montreal coach Michel Therrien said.

The Canadiens also had several chances to score the game's first goal during a power play late in the second but couldn't convert despite five shots on Howard.

"It was a check-fest. Not much happened," Detroit coach Mike Babcock said. "Not much room for either team, not many quality chances."

Plenty of Montreal fans made the trip across the Detroit River to see their team, and the sellout crowd frequently got loud with opposing chants for the Original Six rivals.

NOTES: The game was delayed about 10 minutes midway through the opening period when a pane of glass came loose and was replaced. ... Canadiens defenceman Sergei Gonchar was scratched with an upper-body injury. ... Detroit forward Johan Franzen missed his 15th straight game while recovering from the effects of a concussion. ... The Red Wings played their second and final February home game. They'll end the month having played 17 of their first 23 games in 2015 on the road.