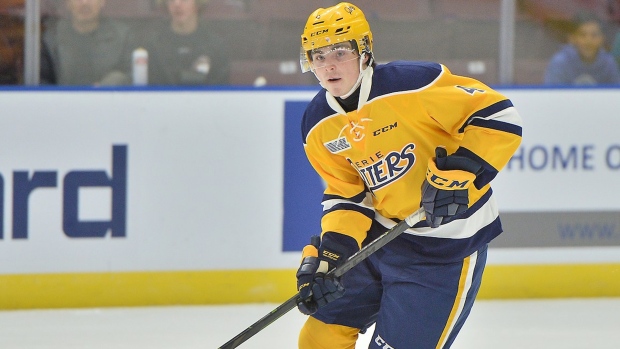 Jamie Drysdale had a realization the other day as he looked at his Team Canada sweater and World Junior gold medal in his room.

"I told my parents, I was like, 'OK, this is pretty cool. We got to get this framed or something.' But these days we're not going out and getting that done so right now it's just hanging in a safe spot."

The medal is a symbol of how far Drysdale has come this season. In December, he became just the seventh 17-year-old defenceman to play for Team Canada at the World Juniors since 1991. The other names on that list: Aaron Ekblad, Ryan Ellis, Jay Boumeester, Chris Phillips, Wade Redden and Scott Niedermayer.

"Coming into the year if you told me I would be on the team, I don't know if I would've believed you," Drysdale admits. "Getting a spot on that roster was a really big stepping stone for me."

Drysdale served as Team Canada's seventh defenceman until the semifinal game against Finland when Bowen Byram got sick and couldn't play. The Erie Otter was thrust into a top-four role, responding with a goal while logging more than 20 minutes.

.@Tessab25 caught up with Jamie Drysdale after Canada's big 1st period, including his first goal of the tournament. 🇨🇦 pic.twitter.com/BhmBbP7J9o

The experience in Ostrava, Czech Republic gave Drysdale a boost of confidence and also insight on how to take the next step.

"A lot of it was just watching and observing the players and staff and how everyone was," he said of his biggest takeaway, "how they conducted themselves on and off the ice. It was little details and how attentive they were to those, even something as simple as the eating habits pre-game."

Drysdale marvelled at how a prospect of Byram's pedigree kept pushing himself.

The Colorado Avalanche selected Byram fourth overall in last year's NHL draft making him the top defenceman taken. Drysdale, who posted 47 points in 49 Ontario Hockey League games this season, is poised to follow in his footsteps. The Toronto native ranks fifth on TSN director of scouting Craig Button's latest list, which came out this week. The next highest defenceman is Jake Sanderson at No. 12.

CRAIG’S LIST: Alexis Lafreniere has strengthened his hold on the title of hockey’s best prospect, with his 112-point regular season further evidence that he belongs atop our 103-player list compiled by @CraigJButton: https://t.co/gf9AaQAK9V#TSNHockey#DraftCentre pic.twitter.com/UsL5uirjSQ

TSN spoke to Drysdale via Skype on Thursday. The following is an edited transcript of the interview.

What would it mean to be the top defenceman drafted?

"It would obviously be something really cool and just show that all the work I put in paid off. It'd be a stepping stone in the right direction. If that happens I know the work has just begun. It would just make me bury my head and get to work even harder."

What's the toughest question you've been asked when you do interviews with NHL teams?

"Toughest question, hmmm. There's been a couple. 'Who's the toughest player you played against at the World Juniors?' That's one and that was definitely tough, because there were so many great players. And then, 'Who's the toughest player you played against in the OHL?' So, those are two questions that kind of stumped me, because there's a ton of great players you go up against depending on the night. That was one I had to think about a bit. It was almost like you're thinking, 'Who left the biggest impression?' That one was pretty hard."

So, who did you end up saying was the toughest player you faced at the World Juniors?

"I had a couple. First, I said playing with (Alexis) Lafreniere and (Barrett) Hayton. Funny story, so the first time I ever was on the ice with Laffy it was a practice after the (selection) camp. It was the first practice after they made the cuts for the team and we were on the ice and just doing a warm-up drill and he really impressed me, I'll just say that (smiles). It was really impressive so definitely Laffy and Hayts were probably two of the guys that I was like, 'Wow,' when I watched them play. And then when it comes to guys I played against I went with (Team USA forward Trevor) Zegras. I liked how crafty that guy was. His creativity and the poise he had with the puck, he was a pretty fun guy to watch."

Trevor Zegras with the gorgeous feed to Arthur Kaliyev, and the USA take a 2-0 lead. pic.twitter.com/UGgXi6Znsk

"I don't know if I could give you one right now. I think there's definitely guys I really like to watch and take things from. Morgan Rielly, I'm a Leafs guy, love the Leafs, and he's a guy I watch a lot and love the way he plays and definitely try to take things, any little thing I can, from his game and try to put into mine. Another recent guy who I think is just pretty lights out is (Cale) Makar. He's a young stud and just how he made an impact in his first full year was pretty unbelievable. How he had the poise to make plays on the blue line with confidence, that's another guy that I want to emulate."

Do you remember watching him at the World Juniors? He was the seventh defenceman, like you, who found ways to contribute.

"He was the seventh defenceman, but he lit it up. I remember he had three or four goals. I remember one of his goals, I'm not sure who it was against, but he walked the blueline off the right side, stopped, kind of faked the guy out, went around him right at the blueline (even though) he was the last man back and then sniped bar down. I remember the commentator saying, 'That takes confidence, that's a skilled play,' and that's just something I want to be able to do, just have the confidence to make a play. If you see a play and you're confident in it then go ahead and make it so that's something that definitely left an imprint on me."

Cale Makar shakes & bakes at the blueline then riffles it home. What a goal. #WorldJuniors #Avs pic.twitter.com/stBDJGr1GM

During the World Juniors a lot of your teammates gushed about your skating. Ty Dellandrea called it "deceptive" noting that you take long strides, "but every stride is so powerful and smooth." How did you develop into a great skater at such a young age?

"Skating has always been a strong suit of mine. The first time I remember skating was when my dad made us a backyard rink and so he would teach me and my brother out there and that was when we were really young. My brother is still a really good skater now. We'd just push each other and mess around. He doesn't play hockey anymore, but up until probably two or three years ago I would tell you he would beat me in a race. So, it was a matter of competition and, as I got to higher and higher levels, it was getting into the skating coaches and doing anything you could to get that edge. Once you find a strong suit in hockey you want it to continue to be a strong suit and continue to develop it so that's what I've been doing, looking for any edge I can."

How are you staying in shape right now?

"We kind of turned our living room into a gym. We moved all of our stuff from the basement so you get the sunlight and get everything in there. My parents ordered me a bunch of new equipment. Me and my dad and my bother have been doing one or two workouts every day and just staying busy and staying active and making sure you're still in shape. I think this is a good opportunity, you're at home and have nothing better to do so you can work on your body and get stronger and develop everything. I have a good set-up in the backyard for shooting pucks as well so just doing anything you can to focus on getting better and building yourself up."

Any specific area you want to improve in the summer?

"Right now, with what I have, it's about putting on size and muscle. It's no secret I'm not the biggest guy (5-foot-11, 170 pounds) so becoming a bigger, stronger player will only help me. That's the biggest thing, building size and strength."

You'll celebrate your 18th birthday next week. Obviously, these are strange times we live in with the COVID-19 pandemic keeping us all inside as much as possible. How do you think you'll celebrate?

"What am I going to do? I have no idea. I cannot see it being any different than what I've doing these days. Probably get a couple workouts in, feel good, have some family time, there's not really much you can do. Maybe call some buddies. Just have a good day doing whatever you can do. I don't really know what else to do. Maybe do a puzzle. It should be a fun day though."

And, in a normal situation, how would you mark the occasion?

"If I wasn't here, well, we'd still be in Erie with the playoffs. So, if I could spend my birthday in Erie that would obviously be the goal, because last year that wasn't the case. So, spending it in Erie with my team is definitely what I'd want to do if all this wasn't going on."

Playing in Erie, do you ever hear any stories about Connor McDavid and the legacy he left?

"You definitely hear stories whether it's at the local breakfast spot or anywhere else, you just hear people talking about him. It's pretty cool. He definitely left a big impact on that city and that town with how he did it and how good he is now, considered the best if not one of the best. The people still talk about him. He's still a big part of that franchise."

Any stories stand out?

"One, my trainer told me. Guys get stretched before the games and have their routines and he told me McDavid was a pretty quiet guy, wouldn't come up and ask for stuff unless he was injured or something. He'd ask for (something) probably twice in the full year and that would've been his first year. He kind of went around doing his own business, knew what he had to do and just did it. You never really needed to talk to him. You never really needed to do anything. He did everything he needed to do and went about his business and it's obviously paid off for him.

"And we have our local breakfast spot that all the boys go to pre-game and you alway hear guys talking about McDavid. It's just, ‘We remember when he was on the team and put up five points a night,' so just little things like that where you're just like, 'Yeah, he's the real deal.'"