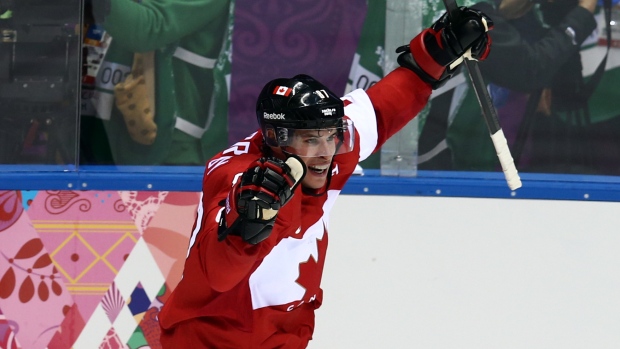 Before there was confirmation that NHL players would be playing in the 2022 Beijing Winter Olympics, TSN’s Craig Button and Mike Johnson joined host James Duthie to examine Canada’s roster in late July while ESPN’s Emily Kaplan took a look at who might draw in for the Americans.

Johnson: Lots of good players here, you can’t really go wrong, every omission is replaced by a great player. So here’s my group. Obviously, the forwards are going to be incredibly strong. We’ll start in net and go top-down. Carey Price, after his performance, provided he’s healthy. Marc-Andre Fleury. And the third goalie is a bit of a question mark but Darcy Kuemper, he played well at the World Championships, there’s not a lot of guys there that fit the bill, so he’s my third guy. Shea Theodore and Alex Pietrangelo, Vegas’ pair. Adam Pelech jumps up from the New York Islanders, I thought he was fantastic, paired up with the offence of Cale Makar. Morgan Rielly, Dougie Hamilton, Thomas Chabot and Jared Spurgeon of course. I’ve returned the line of Marchand-Crosby-Bergeron together. I separated McDavid and MacKinnon. I’ve got Huberdeau and Stone with McDavid, I’ve got O’Reilly and Scheifele – three centremen – playing with MacKinnon. And then my fourth line are versatile great players that are good defensively. Couturier, Point, Marner. And my wild cards. Guys who can swingman up and down if there’s an injury or a situation. Mathew Barzal and John Tavares. That’s my group to win another gold medal for Canada. 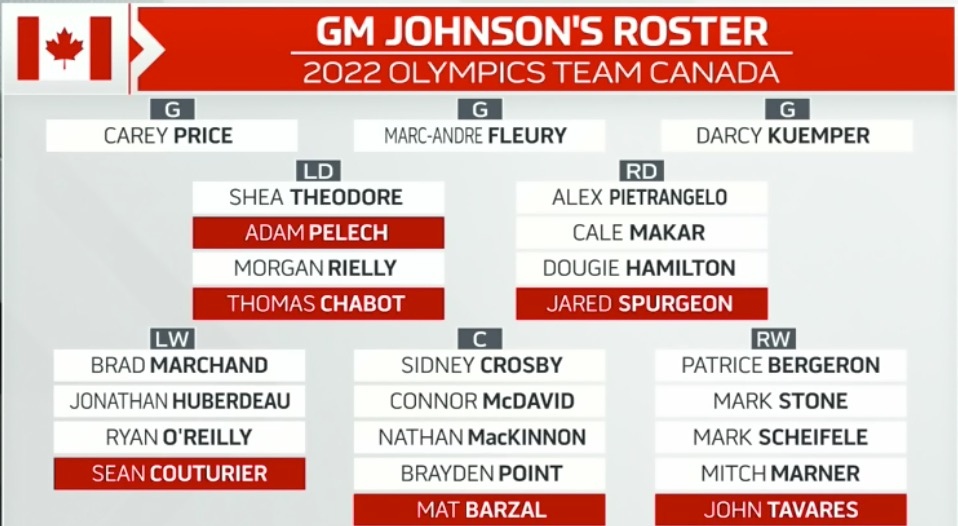 Button: Well, it’s a pretty good group. They could win a gold medal and the beautiful thing about Team Canada is there’s so many great options and there’s so many different opinions. So, here is my Team Canada. And you will not be surprised by the goaltenders. Mike and I totally agree. Jacob Chychrun had a fantastic season, outstanding defensively. Darnell Nurse. He’s that big presence on the blueline and Drew Doughty, yup I want Drew Doughty back. But I think those three right shot defencemen, it’s clear cut that they’re all on the team. I go down the lineup a little bit, I’m going to move Brayden Point over to the right win. I’ve got Bo Horvat because he can drive things. And yeah, people may look and go ‘Yanni Gourde and Nick Suzuki, huh?’ Yeah, Yanni Gourde! Yanni Gourde makes opponents uncomfortable. There’s no situation you can’t play him in. And Nick Suzuki, he just keeps getting better and better and I think that he deserves a lot of consideration on this team.

Duthie: Let’s look at the players that you guys don’t agree on. And there’s six.

Johnson: Well, to me, I think Pelech, I like the left shot right shot. I love him with Makar defensively. He’s so good defensively. He’ll lock it down. And I think we see in the Olympics, it’s not necessarily about goal scoring but really defending when they can. So I like Pelech. I like Chabot, maybe just a little bit more of a puck mover than Darnell Nurse. And then Spurgeon-Doughty? I don’t know, Doughty’s got the experience, I go with Spurgeon, who is one of the best guys going back to get pucks. 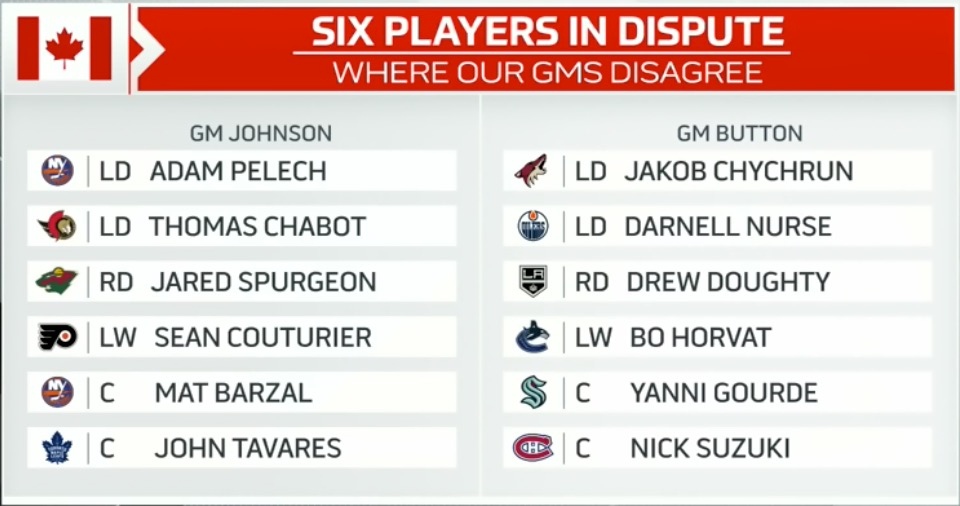 Kaplan: This is expected to be one of the deepest talent pools ever from the U.S. coinciding with the growth of hockey here in America. Goalies I think are pretty obvious when you look at my roster. Connor Hellebuyck and John Gibson. Easy one and two. I think there will be a debate whether it’s Jack Campbell or Thatcher Demko for the third one. Blue line is absolutely our strength. I know you guys were debating Jacob Chychrun. We’d take him, I know he can compete for America. He just chose to compete for you guys. Even still, it’s looking really good. I think there’s going to be a value in bringing in some of these young guys and knowing the way that the Americans always build their roster, there’s a premium placed on guys that came through the National Team Development Program like Charlie McAvoy, who I have here on my first pairing with Jaccob Slavin. I think that’s a really good match between the two of them. It was tough to leave off a lot of the defencemen. You look at guys like Jacob Trouba and Torey Krug, Jeff Petry could have made this team. Ryan Suter. Again, I think they’re going to go younger. And then when it comes to our forward group, it seems like Patrick Kane is the one veteran. Blake Wheeler I think will make the team as well. We’re a little thin on the right side, I’ve got a couple left wingers like Guentzel and Brock Boeser – I know Boeser is a right winger. We’ve also got Alex DeBrincat playing out of position. So, I think guys like Chris Krieder who have a lot of versatility could make the team. We’ll see what happens. Kevin Hayes is another guy who I wouldn’t be surprised to be on there. 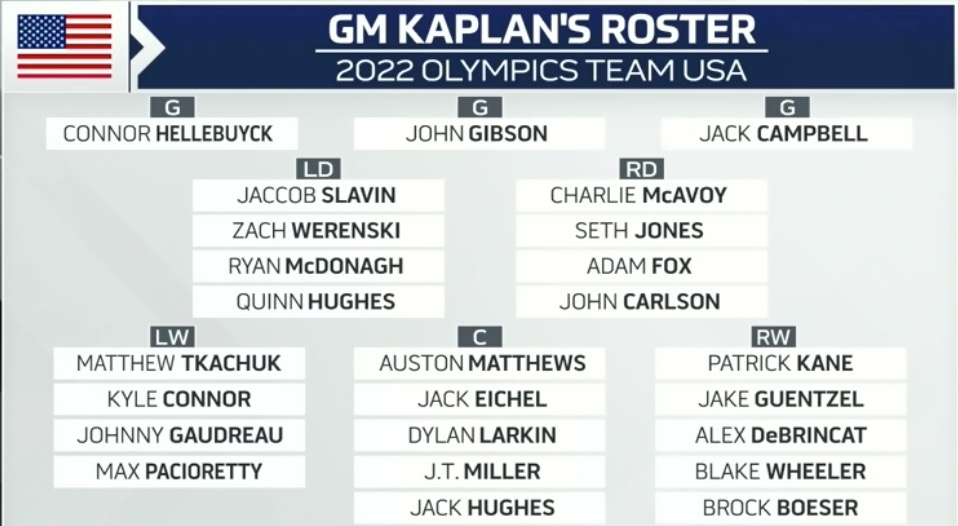