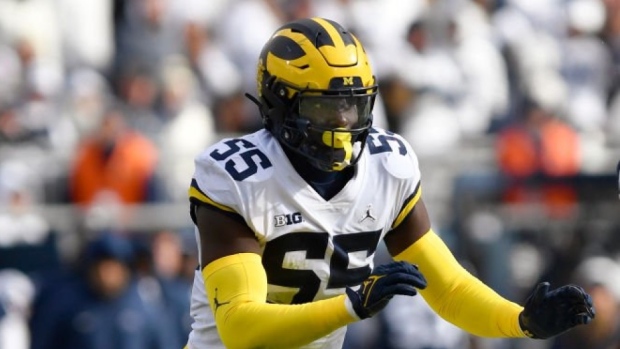 ANN ARBOR, Mich. (AP) — NFL prospect David Ojabo was injured at Michigan’s Pro Day workout, wincing in pain after he went down to the turf.

The NFL Network reported Friday that the defensive end was injured in a pass-rushing drill, went down clutching his left leg and had to be helped off the field. The NFL Network was the only media outlet with access to the workout.

Ojabo’s injury may affect his chances of being one of the top picks in the NFL draft next month.

He had 11 sacks last season, helping Michigan win its first Big Ten title since 2004 and advance to the College Football Playoff for the first time, in a breakout year that impressed NFL scouts. He skipped his senior season with the Wolverines after being voted second-team All-America and All-Big Ten.

The 6-foot-4, 250-pound Ojabo set himself up to go high in the draft after running a 4.55 40-yard dash to rank among the fastest defensive linemen at the NFL combine. If Ojabo has a long-term injury, he may slip in the draft.

“I’m praying for him and hoping that it’s nothing long term or anything that will affect his draft stock,” said Hutchinson, who is expected to be among the first few picks in the draft.

Ojabo was born in Nigeria and lived in Scotland before landing at Blair Academy in New Jersey, where he started playing football as a junior in high school. Ojabo was a redshirt in 2019 at Michigan and had one tackle in 2020 in three games.