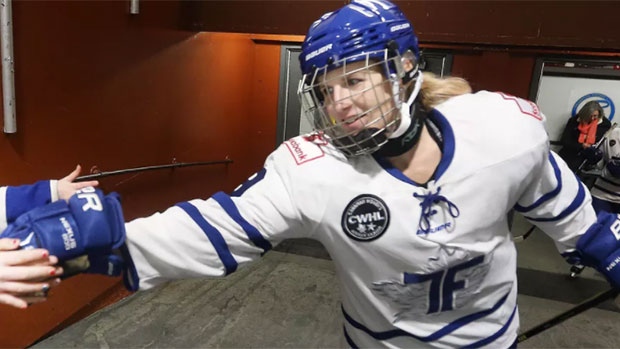 In December 1998, Mark Tewksbury, who won gold in the 100-metre backstroke at the 1992 Olympics in Barcelona, made history when he became Canada’s first Olympic champion to come out.

In 2016, Brock McGillis was the first male professional hockey player to come out after a playing career that included stints in the Ontario Hockey League, the United States, Europe and CIS.

Tewksbury, McGillis and Platt are just three of the various athletes and coaches whose stories are profiled in Proud to Play: Canadian LGBTQ+ athletes who made history by author Erin Silver. A children’s book, Proud to Play profiles each athlete’s experience growing up, their coming out story and their lives after.

For Silver, who has also published two other children’s books, the goal of the book was to honour the athletes and contribute to the larger conversation of advancing inclusion and diversity in sports.

“I think by educating people and having visible role models we’re going to keep making progress,” said Silver. “So hopefully books like this won’t be needed in the future, that it will be a non-issue and no one is talking about. But we still have a ways to go and I just hope that a book like this for kids, that you have to talk about it with them from the youngest possible ages so that they always are accepted and inclusive and that we all celebrate diversity.”

For the athletes, their desire to have their stories be told came down to two things, humanization and education.

“By humanizing and sharing stories, hopefully not only queer people will see it, but hopefully parents and parents of straight athletes will see it and they’ll see what that type of language does, what that homo-negative language does to people and the impact it has and the actual ramifications of it, and then maybe they'll be less likely to use it,” said McGillis.

“To properly educate people, I think people need to go into it with an open mind and a lot of people won’t do that,” said Platt. “But one step towards opening people’s minds would be humanizing trans athletes or gay athletes or anyone who is seen as different in sports.”

While writing the book, Silver noticed several common themes that emerged among the athletes’ stories, despite the varied experiences of everyone profiled.

“The common thread would be how hard it is that you can’t be yourself, to be scared of anyone finding out who you are,” said Silver. “We’ve made progress, women’s team sports a good example of good progress but in other sports it’s still very hard and we still have progress to make.”

When it comes to LGBTQ+ athletes who are out, there is large gap between men’s team sports and women’s team sports. On the women’s side, from hockey to basketball to soccer, there are numerous athletes, including big-name stars, from those sports who are openly LGBTQ+.

While the women’s team sports space is far from perfect, especially when it comes to trans and nonbinary athletes, Platt’s experience in coming out to her CWHL teammates was a positive one.

On the men’s side, homophobia, sexism and misogyny continue to be fixtures in locker rooms. Currently, there isn’t a single out player playing in the Big Four (NHL, NBA, NFL and MLB). While many professional sports leagues have Pride nights and campaigns like Hockey is for Everyone, McGillis doesn’t think those actions are enough.

“You have to do the work to shift your culture before you can celebrate the shift,” said McGillis. “Unfortunately that's not been done in men's team pro sports. We still have a homophobia that exists, we still have a lack of out, queer athletes in men's team sports because it's not a safe space and until we make it a safe space and we humanize the issues for people so they recognize and educate them so it becomes a safer space, all these actions mean nothing because they're not doing anything.”

On the flip side, Tewksbury, who serves as vice-president on the Canadian Olympic Committee board of directors, has seen the progress towards positive change over the years since he first came out publicly.

“Back in my day we didn’t even say the word out loud, gay and sport,” said Tewksbury. “Those two words never went together so to have this kind of robust conversation with big institutions but also very different and diverse members of the LGBTQ+ community because obviously we’re not all the same. It’s just remarkable to see.

“I don’t think kids today will find this book as unusual as I would’ve found it at their age in my era and that again that reflects the change in the world.”

For Platt, she didn’t grow up with any positive trans role models, citing that any time she saw a trans person, “they were the butt of the joke in a TV show or something like that.” But the positive reception to Browne’s coming out made it easier for her and hopes she can be that person for somebody else.

“Ideally, I would like to make things easier for people who come after me,” she said.