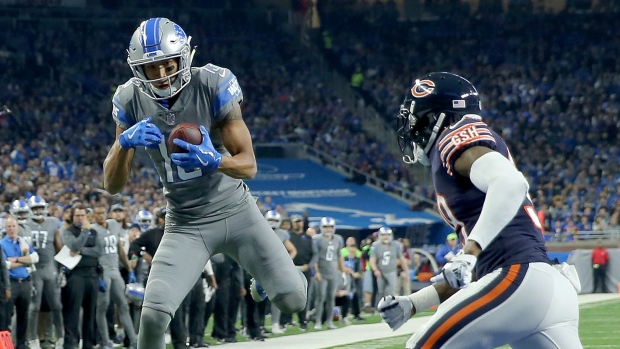 The Canadian Football League’s collective bargaining agreement contains provisions that virtually assure that some of the best Canadian players on the planet will never set foot in the CFL.

And unless something changes, it’s going to block the Toronto Argonauts’ efforts to land receiver T.J. Jones, a Canadian-born player who starred for the Notre Dame Fighting Irish before playing 45 National Football League games with the New York Giants and Detroit Lions from 2015 to 2019.

This is all because the CBA – signed last spring by the CFL and the Canadian Football League Players’ Association – restricts rookie Canadian players to three-year contracts for at, or slightly above, the league minimum $65,000 (Cdn.) per season.

In the case of Jones, who was never drafted because he would not have been granted Canadian status when his CFL draft year came about in 2015, it means he can’t earn above the league minimum for three seasons.

Even if Jones had been taken in the first round of the CFL Draft, he would be limited to $80,000 per season on a three-year contract, still well below the market value for a 27-year-old Canadian with five years of NFL experience.

Jones accepted an offer of $200,000 per season from the Argos earlier this month, despite receiving multiple offers from NFL teams. All of that, however, is on hold. And unless the CFLPA approves changes to the language of the CBA – which have been approved by the league – he’s never going to play in the CFL.

While Jones is the first player caught in this web, he certainly won’t be the last. It’s common for Canadians who play some time in the NFL to return home to the CFL at a marquee salary, given that they’ve proven they’re good enough to play with the best players in the world.

There have been several who have done so in recent years, including Jamal Westerman (New York Jets), Austin Collie (Indianapolis Colts), Cory Greenwood (Kansas City Chiefs), Bo Lokombo (Baltimore Ravens, Las Vegas Raiders), Eli Bouka (Philadelphia Eagles) and, most recently, Edmonton receiver Tevaun Smith, who signed a deal with the Eskimos last off-season for in excess of $100,000 per season after stints with the NFL’s Colts, Raiders and Jacksonville Jaguars.

Smith had 55 catches and six touchdowns as a CFL rookie last season, but his deal with Edmonton would have been disallowed under the current CBA.

Jones was ruled a free agent by the league and in December the CFL informed his agent that he had the same rights as any American free agent new to the league. This meant a minimum two-year contract at whatever the market would deliver.

However, a final version of the CBA had not been delivered to the clubs or agents, so nobody was aware of the snag of signing Jones at market value.

Every CFL club was notified of Jones’ interest in playing in the CFL in January and each expressed an interest in signing him at well above the league minimum. None of the clubs believed there would be an issue paying him a market-value wage.

But once the deal with Toronto was agreed upon, the league determined the deal was in violation of the collective agreement. The CFL subsequently proposed a language amendment to the CBA that would allow players in Jones’ situation to have their deals validated. That amendment, however, requires approval the CFLPA.

Without that, it’s expected Jones will turn his attention back to the NFL, rather than coming to the country of his birth to play with the Argos for the league minimum.

Other Canadians playing in the NFL – such as Kansas City’s Ryan Hunter and Laurent Duvernay-Tardif, Cleveland Browns’ Eli Ankou, Houston Texans’ Christian Covington and Seattle Seahawks’ Luke Willson – would all be restricted in the CFL to three years at or near minimum salaries, making it unlike they – or any other Canadians with NFL experience – would ever come back to play in Canada.

“Right now, without this necessary change, it’s far more enticing for a Canadian with NFL experience to play in the XFL on a one-year commitment [approximate average salary $73,000 for 10 weeks] than in the CFL on three-year commitment [$65,000 for 21 weeks],” Fry said. “There is an opportunity to get things right for the future. I don't think anyone wants to see NFL-experienced players, especially Canadians, choosing the XFL over the CFL.”

Ironically, Jones would be ineligible for the CFL’s Most Outstanding Rookie Award based on his NFL experience. But that same experience does not exempt him from the CFL’s cap on rookie Canadian salaries.