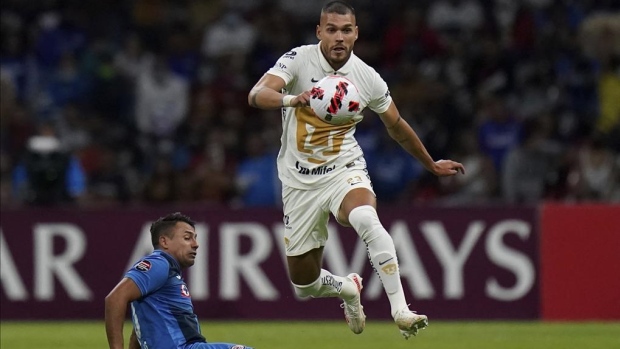 MEXICO CITY (AP) — Pumas UNAM played to a scoreless draw against Cruz Azul on Tuesday night to advance 2-1 on aggregate to the CONCACAF Champions League final.

Pumas will face the winner of the other two-legged semifinal on Wednesday night between the Seattle Sounders and NYCFC. The Sounders won the opener at home, 3-1.

Pumas won the first leg of the semifinal at home 2-1 last week, with Juan Ignacio Dinenno scoring both goals. But Christian Tabo got a valuable away goal for Cruz Azul.

Defender Arturo Ortiz was sent off at Estadio Azteca with a red card in the 63rd minute, and Pumas was down a player the rest of the way.

Video review overturned a penalty kick awarded to Pumas in the 74th minute.

Cruz Azul played without Carlos Rodriguez, who broke his leg in a Liga MX match against Mazatlan on Friday.