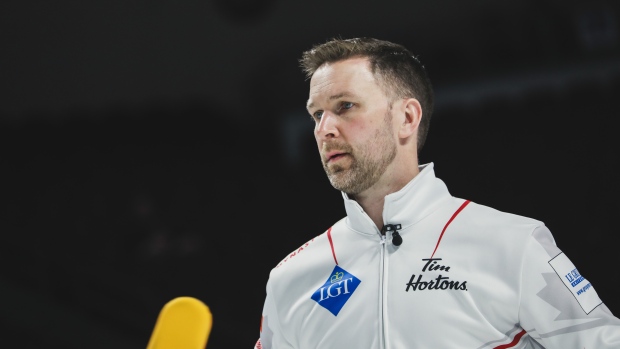 LAS VEGAS — Fire up a memo for the curling arena host and let the television broadcasters know too. The surname of one of Canada's top curlers has been mispronounced for years.

Announcers have used the roll-off-the-tongue 'GOO-shoo' for Brad Gushue's last name since he broke out on the national scene nearly two decades ago.

A household name for fans of the Roaring Game, it's an adjustment that's subtle, yet distinct.

Instead of the one-two rhyming punch of 'goo' and 'shoo,' the proper pronunciation is more compact with a clear 'ZH'-emphasis at the start of the second syllable.

"When I first came on the scene, people would ask and I'd say it like I always say it: 'GUH'-zhoo,'" he said. "It (later) became a heavy emphasis on the 'GOO' and then 'GOO-shoo.'

"I'd try to correct it and they'd make it an even worse mess of it, so I just gave up."

Gushue, 41, won Olympic gold at the 2006 Turin Games and took bronze at the Beijing Games in February.

The pronouncer subject was recently brought to his attention on social media.

"I don't usually reply too much on Twitter," Gushue told The Canadian Press. "I use Twitter to get my news. But then I saw it come across and I thought, 'This is an opportunity to say what it is.' It kind of took off a little bit more than I expected.

"I thought it would just be me replying to that one person and a few people would maybe see it. But it took off and more people are pronouncing it correctly now which is a good thing."

The family of the St. John's-based skip has been based in Newfoundland and Labrador for at least three generations, he said, adding that he believes the surname's origins are rooted in Wales.

The emphatic introduction of "BRAAAAD GOOOOOOOOOO-SHOOOOOOOOOOO" at major curling events will need a little tinkering.

On-air TV announcers should update their pronouncer lists too.

"Like I said on Twitter, I've been called worse so it doesn't bother me too much," Gushue said with a laugh. "But yeah, it's GUH'-zhoo. Just let it flow a little more gentle than most people do.

"I think most people have learned from what they hear on TV and in the media. Maybe I should have emphasized it a little bit more back in the day."

Gushue, who won world gold in 2017 and silver in 2018, will play in the semifinals Saturday night at the Orleans Arena. Medal games are scheduled for Sunday.

This report by The Canadian Press was first published April 9, 2022