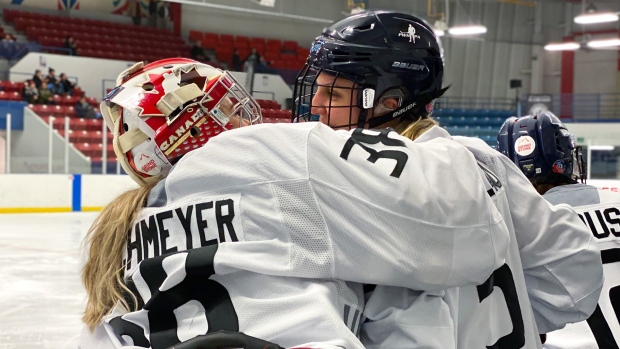 While the world's best under-20 men were set to open the World Junior Hockey Championship in the Czech Republic, a tweet displaying the doorbell cam-like broadcast quality of the 2020 IIHF U18 women's worlds in Slovakia went viral.

"It was a lack of investment in the women's game," Hefford said. "These girls who compete for our country deserve to have a screen where their friends and family in Canada can watch."

The response was swift as the IIHF eventually stepped in to provide a better quality broadcast for the last two days of the tournament. But the incident was a reminder of why the Professional Women's Hockey Players' Association continues to tour as they made their return to Toronto, where the initiative began last September.

"To see online people finally speaking up, I hope our cause has given the courage and that voice to say this is what we’re talking about," Hefford, who runs point as an executive with the PHWPA, said. "Five years ago, they would have got away with something like that. But we're in a new time."

The PHWPA's Dream Gap Tour staged its biggest event yet this weekend with over 100 players taking part in six games spread over three different venues. The first event on the tour featured four games at Westwood Arena in Toronto's west end with all games selling out the estimated 700-seat venue.

For its return to Toronto, the tour expanded the weekend festivities to three days, increased the number of games from four to six spread over three different venues. A speaking event with industry leaders took place on Friday, while a skills competition is set for at Nathan Phillips Square (weather permitting).

"From our perspective, we feel like we’re moving forward and driving awareness to the cause," Hefford said speaking at Herb Carnegie Arena, the primary venue for the weekend's events. "We still know we have a lot of work to do and there are a lot more people we want to reach with this. I think we’re still focused on our end goal and how to get there."

The Dream Gap Tour is named to illustrate the gap that exists between what young boys and girls can dream to become professional hockey athletes. Formed shortly after the Canadian Women's Hockey League ceased operations last April, the goal is to have a single women's hockey league with fair wages.

"It’s going to take time educating people and eliminating the confusion of the current state of women’s hockey," PWHPA member Sarah Nurse said. "Ultimately, our main goal is to have the league one day but we have objectives and there are stepping stones that we need to cross before we get there."

The National Women's Hockey League continues to operate in the United States, but over 200 players elected not to take part in that league and joined the PHWPA last May with the hope of creating a more sustainable single-league solution.

Earlier this month, the PHWPA saw its first defection when Jordan Juron joined the Boston Pride of the NWHL.

"All politics aside, with everything that is going on, I just wanted to get back on the ice and have some fun," Juron told reporters in Buffalo following her first game on Jan. 5.

Other challenges for some players include the lack of a trophy to play for that traditionally comes with playing in a traditional league.

"There's no doubt about it that that's a difficult part of this," Hefford said. "But I think the positive part is we're not ready to just settle for a trophy. It's about more than that."

The National Hockey League has long been seen as a key partner if a single women's league is to have a real shot at longterm success, similar to how the NBA helps support the WNBA.

Although the league has stayed out of the conversation until there is one entity in women's hockey, the PHWPA has made some inroads south of the border. The Chicago Blackhawks partnered with the PHWPA for the tour's Chicago stop and the Philadelphia Flyers joined up with the Association for their Philly stop in February.

The PHWPA is hoping to announce another date on the tour in February soon.

"The men’s side of the game recognizes that all hockey girls are sports girls, more women are involved," PHWA member Brianne Jenner said. "We’re an important part of growing this game and there’s a lot of female fans of the NHL. If we can grow, it’s good for that league as well."

But there's still no timetable as to when that will happen.

This report by The Canadian Press was first published Jan. 11, 2020.