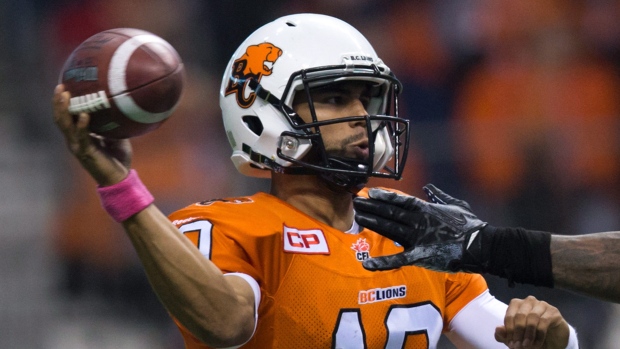 If Jonathan Jennings starts all 18 games for the BC Lions this season and leads the team to the Grey Cup, he will earn $110,000 this season. By far, the lowest of any projected Day One starting quarterback in the CFL. And if he gets injured early in the season, that number will drop to just $55,000.

Jennings has two years left on his entry-level contract, meaning the Lions have all the leverage - for now.‎ But while general manager and head coach Wally Buono still doesn't want to be pinned down to a timeline, he realizes that it might be best to get a deal done sooner rather than later.

There have been suggestions in recent weeks that Jennings’ new agent, Bardia Gharemenia, would encourage his client to hold out if the Lions wouldn’t pony up, but Gharemenia doesn’t want to go there.

“Holding out is not a good option for a young quarterback. He needs to play at this stage of his career and he wants to be there for the start of camp,” said Gharemenia.

With his performance over the final six games of the season, Jennings gave a disillusioned Lions fan base something to get excited about. The rookie from Saginaw Valley State had a 3-3 record in 2015, completing 66 per cent of his passes for 2,004 yards, tossing 15 touchdowns and ended up with a quarterback rating of 99.8. But from the Lions’ perspective, he has only started seven professional games and while he goes into training camp as the projected number one, his grip on the job is far from a lock.

"We have an order that were very comfortable with,” said Buono. "Today we’ve made Jon the starter. We don’t know what the future holds.‎"

Most of his teammates believe Jennings has all the tools to be a star in the CFL and the face of the franchise in BC, but Jennings and Gharemenia don’t need to look far to see how fast things could change. Along with Lulay’s chronic shoulder problems, consider that Jennings himself suffered a sprained AC joint in his left shoulder in the first half of a 35-9 semifinal playoff loss to the Calgary Stampeders. Jennings says he is 100 per cent ready to play, but Gharemenia wants his client protected.

“Look. We’re not looking for elite starters money but there are backups out there right now that will make far more then Jon will if they don’t play a down and he plays in all 18 games,” said Gharemenia, referring to Trevor Harris (250k base salary) and Lulay (200k base).

The two sides did speak on Tuesday and while offers have yet to be exchanged, the tone of the most recent discussions have Gharemenia feeling somewhat encouraged that a deal could get done before the start of training camp.

“Wally understands that Jon hasn’t come close to reaching his upside,” added the agent. “But God forbid in a pre-season game he gets hurt, and then all he gets is $55,000. That’s not fair to the kid.”