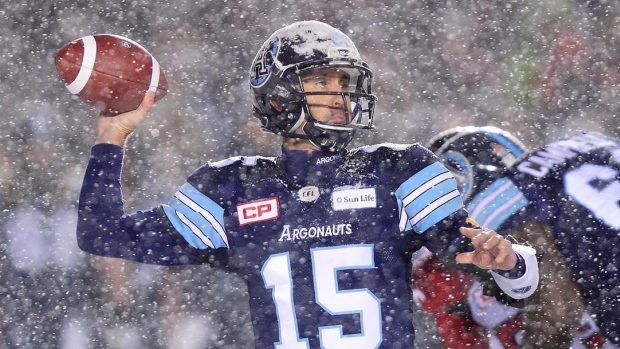 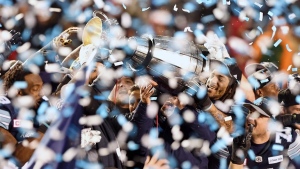 The Argonauts have done some tinkering to their roster but the team will still have a familiar feel with veteran quarterback Ricky Ray leading the way. After two injury-plagued seasons, Ray cleared the 5,000-yard passing plateau last year to lead Toronto to a 9-9 record, an East Division crown and post-season success.

The likely backup will be James Franklin, who was acquired from Edmonton in December and later signed a two-year extension. Trestman made it quite clear who the No. 1 pivot would be.

"Ricky Ray is the quarterback here and he's going to play every down as long as we can play him," Trestman said on a conference call. "There's no other way of saying it."

Ray was the East Division nominee as outstanding player in 2017. After leading his team to a Grey Cup win, the 38-year-old decided last February to return for a 16th CFL season.

He'll have Anthony Calvillo guiding him on the sidelines this season as the team's quarterbacks coach. Calvillo, who retired in 2014 as pro football's all-time passing leader, won the Grey Cup on two occasions over five years while playing for Trestman with the Alouettes. 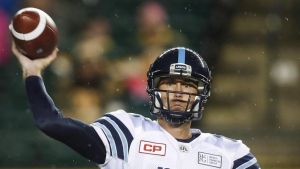 Trestman said the offensive playbook he uses in Toronto is very similar to the one he used in Montreal.

"The plays we run are the same plays Anthony Calvillo ran for five years," he said. "There's going to be nuances, schemes and structure that might change slightly but that's what happens every year."

Running back James Wilder Jr., the CFL's most outstanding rookie last season, will return on a two-year extension after expressing frustration earlier in the off-season about not being allowed to opt out of his deal to pursue NFL opportunities.

The Argonauts also added defensive backs T.J. Heath and Ronnie Yell to provide some depth and experience in the secondary. And Toronto brought back kicker/punter Swayze Waters for a second stint with the team.

Owner Maple Leaf Sports and Entertainment is making some off-field changes after the team struggled with attendance last year. Some ticket prices have been lowered, tailgate parties will be moved inside the stadium, and a marketing blitz will be aimed at generating buzz among millennials and longtime club supporters.

"There's a lot of things that can be done to get people into the stands and come out and enjoy a beautiful stadium and a great football product," said Argonauts general manager Jim Popp. "I've got all the confidence in the world that there will be a lot of positive things that happen."

Training camp will begin Sunday at York University. The Argonauts will open the pre-season schedule June 1 in Hamilton and will play the visiting Ottawa Redblacks in a pre-season game June 7 at the University of Guelph's Alumni Stadium.

Toronto's regular-season opener is set for June 15 at Saskatchewan. The Argonauts' home opener is scheduled for June 23 against the Calgary Stampeders at BMO Field.

"I don't look at it as we're the defending Grey Cup champions," Trestman said. "We're the 2018 Toronto Argonauts. That's the way we approach it. We can't defend our championship because we're not the same team that we were a year ago."