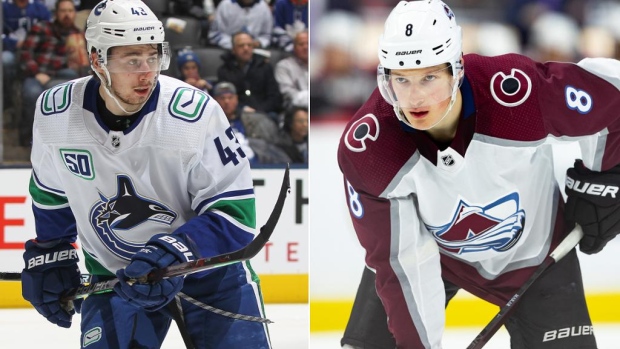 VANCOUVER — Quinn Hughes was Elias Pettersson's roommate when the Vancouver Canucks were on the road this past season.

Hughes saw what goes into becoming a star defenceman and Calder Trophy winner, as Pettersson was named the NHL's top rookie in 2019.

"It means a lot. I think it's a great honour especially this year because there's a lot of guys who could have been in the top three," Hughes said Wednesday from Vancouver on a video conference call.

"This year we had a really good team. I was fortunate to be put in good spots."

Should Hughes earn the trophy, the Canucks would be the first NHL team to boast back-to-back Calder winners since the Boston Bruins in 1967 and 1968 (Bobby Orr and Derek Sanderson).

A Canuck has been in Calder contention three straight years. Right-winger Brock Boeser was nominee in 2018.

He's just the third defenceman since 1943-44 to top the rookie scoring race. Bobby Orr and Brian Leetch were the other two, winning in 1967 and 1989 respectively.

"The thing that impressed me more than anything was the consistency he was able to bring this year," said Canucks defenceman Tyler Myers, who claimed the Calder in 2010 when he was a Buffalo Sabre.

"As young as he is, you knew he was a big talent coming into the group. He's obviously a special player.

"You see it a lot of times with young guys. They have ups and downs especially in their early years.

"With Quinn, the way he was able to stay consistent and play at a high level the whole year. That showed a lot of maturity."

Hughes' 53 points were the most by any rookie defenceman since 1991-92, when Nicklas Lidstrom compiled had 60 in 80 appearances with Detroit.

"He's been a surprise right from Day 1 especially when you look at him," Canucks head coach Travis Green said. "Sometimes he looks like . . . you think it's your paper boy walking down the hall.

"He's just a real good hockey player we're lucky to have. We're fortunate the last three years to have three rookies that have been big parts of our group. That doesn't always happen."

Makar got a head start on his rookie season when he made his NHL debut in the 2018-19 post-season.

Getting 10 playoff games under his belt launched the Calgarian to a stellar first season in the league.

Both Hughes and Makar played two seasons of college hockey before starting their NHL careers.

"For us, I think it was just the time we needed to develop our bodies not only on the ice, but off as well," Makar said. "College gives you an opportunity to play with older and more mature guys."

Kubalik led all rookies in goalscoring with 30 goals in 68 games.

The 24-year-old from Plzen, Czech Republic, became the first Czech-born player in NHL history to lead rookies in goals, as well as the third to reach the 30-goal plateau.

"The goal was obviously to make the team because coming from Europe it's always tough," Kubalik said. "That's what I did so it was a first good step.

"I was a little up and down at the beginning, but I figured it out a little bit, how to handle some situations, especially travelling and stuff."

This report by The Canadian Press was first published July 15, 2020.