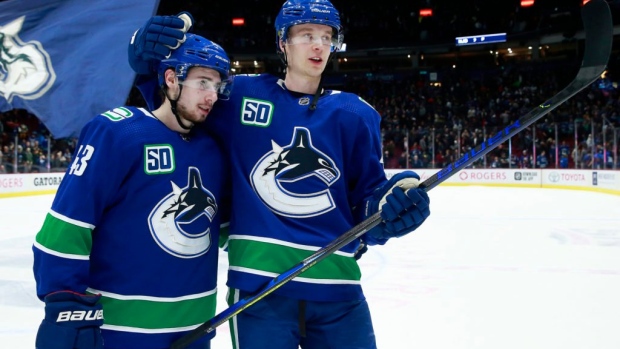 The Vancouver Canucks are close to locking up two key pieces of their core. According to TSN Hockey Insiders Pierre LeBrun and Darren Dreger, the team has agreed to terms with defenceman Quinn Hughes and forward Elias Pettersson on multi-year contracts.

Hughes has reportedly agreed to a to a six-year contract extension worth $47.1 million, while Pettersson has agreed to terms on a three-year deal worth $22.05 million.

As per myself and @DarrenDreger, the Canucks have agreed to terms and AAV on Pettersson and Hughes. But deals still to be finalized.
Here are the deals, per sources:

Vancouver is expected to make the formal announcement on Sunday, according to LeBrun.

Canucks are expected to make formal announcement on Pettersson/Hughes Sunday morning PT. Still need to finalize both contracts. Nothing has changed from term and AAV reported yesterday. @TSNHockey @TheAthletic

Hughes, 21, was third on the team in scoring last season, recording three goals and 38 assists for 41 points in 56 games. In 129 career NHL games, the Orlando, Fla., native has posted 11 goals and 86 assists. Hughes was selected seventh overall by the Canucks in the 2018 NHL Draft.

Pettersson, 22, played just 26 games last season due to injuries, recording 10 goals and 11 assists. In 165 career NHL games, the Sundsvall, Sweden, native has 65 goals and 88 assists. Pettersson was selected fifth overall by the Canucks in the 2017 NHL Draft.