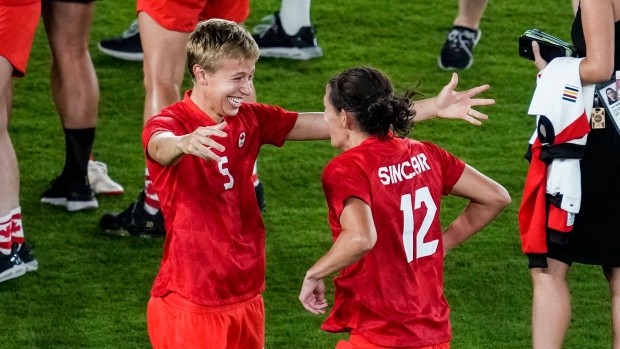 It was a little over a year ago that Canadian midfielder Quinn made the brave decision to come out publicly as transgender. They spoke about the difficulties of being a public figure and not having the world know who they were.

Quinn became the first openly transgender and non-binary athlete to earn a medal at the Olympic Games when they took home gold with their Canadian teammates in Tokyo.

“With the Olympics, being the first openly transgender athlete to not only compete, but then to win a medal – it definitely garnered a whole new round of attention,” Quinn told TSN. “But at the same time, I think just being authentic through that – that’s been really exciting.

Quinn was part of the Canadian team that won bronze at the Rio Games in 2016, but they had not come out publicly yet. In September 2020, they thrust themselves into the spotlight as one of the few openly transgender athletes in professional sports.

“It's definitely been a whirlwind of a year,” they said. “I think through the Olympics, it was a really great opportunity just to see the change that's happened in my own personal life from 2016. I think it was really cool to see how much it's changed since the last Olympics. Just overall this year, it's been super, super busy, but it's been exciting to just see my own journey.”

The whirlwind continues as Quinn is currently in Montreal with the national team as part of the Celebration Tour to honour the squad’s Olympic gold. Canada won the first game of the tour with a resounding 5-1 victory over New Zealand in Ottawa on Saturday. The Canadians will have a rematch with the Football Ferns on Tuesday at Stade Saputo.

This year, Quinn has cemented themselves as an integral part of Canada’s midfield. They featured in every match during the Tokyo Games, starting in all but one, and has played in 11 of Canada’s 14 games this year.

“I think Quinn for me has been one of the most consistent players from the get-go,” head coach Bev Priestman said before Saturday’s game. “I think they have a leadership quality on the pitch as well – off the pitch, very laid-back – but on the pitch, helps us progress the ball.”

“I definitely think that there's a new confidence to my play,” said Quinn. “I think as well, getting a lot of opportunities in the midfield is something that I haven't gotten at the international level before.”

Quinn has been used in a dual role as a centre back and midfielder in the past, but under Priestman, they have been able to focus on their role in the middle, disrupting the opposition’s attack and helping connect the offence.

“I think at times in the past, I've been frustrated with jumping back and forth because I wanted to put all of my focus and attention on one,” Quinn said. “But I can definitely see that my experiences as a centre back and all the experience that I've gotten in that position has helped me in the midfield… I think the more that you can understand roles and the depth that people can do, it’s going to help you out on the pitch.”

“I think it's really added a different dynamic to their game in the midfield,” Priestman said about Quinn having experience as a defender. “Helps us unlock defences, helps us progress the ball up the field, and I think when Quinn's confident, we see the best out them. So really pivotal player for us moving forward.”

Quinn continues to put in the work off the pitch as well. They are an ambassador for Athlete Ally, a non-profit organization that fights for inclusion in sports for LGBTQ+ athletes. On Tuesday night, Athlete Ally will honour Quinn at the seventh annual Athlete Ally Action Awards to recognize their groundbreaking achievements this past year.

“Thanks to them, transgender and non-binary youth across the globe see themselves represented at the highest level of sport and know that they absolutely can make their dreams come true,” Hudson Taylor, executive director of Athlete Ally, said in a release.

Quinn said that since coming out, they have had several interactions after games with the OL Reign, their club in the National Women’s Soccer League, where young members of the LGBTQ+ community have approached them to say how much Quinn has helped them feel more comfortable and more accepted, especially within the realm of sports.

“I think at the same time, obviously, I have to be realistic about the current state of the legislation that's happening in the United States, and the fact that spaces aren't as inclusive as they can be in Canada,” they said. “I think that it's been a really difficult time for LGBTQ folks, specifically trans folks in the United States.”

In Texas, Governor Greg Abbott is expected to sign a bill that would bar transgender youth form participating on school sports teams that align with their gender identity. Texas is poised to become the eighth state that has passed similar laws this year.

“It has at times felt like there isn't much hope for the future. But I'm hopeful that people can see the advocacy work that I'm doing along with my peers and how there's potential for change in the future,” Quinn said.

Quinn’s increase in visibility has unfortunately also led to a rise in derogatory remarks, particularly on social media. There have also been several instances this year where commentators in both the NWSL and international soccer have misgendered Quinn. But despite the difficulties, they still hold on to a positive outlook.

“I think if you look at a lot of social movements, you see that right now, the LGBTQ community, and specifically the trans community, is at the highest point of visibility, right?” Quinn said. “You're seeing this in all realms of social media, whether it's in sports, in acting… I think unfortunately, at times, we equate visibility with accessibility or acceptance, and I think there's going to be a natural pushback when there is a heightened point of visibility.

“I think it is a natural progression. And even with increased pushback, I think the fact that these conversations are happening more and that there is more visibility, and there's more advocacy work that's at the forefront of conversations – I think that in the future, that's going to make places more accepting.”

One place that Quinn knows they are accepted is with the national team, where the players are among their greatest allies.

“Unfortunately, I'm still having experiences where I'm facing transphobia in the sports environment, and to see my teammates be the people that are stepping up for me in those spaces is really, really exciting,” Quinn said. “They're becoming – I don't want to say my first line of defence, but they're being really outspoken in those situations.”

Quinn also said they’re starting to see positive changes in the National Women’s Soccer League. OL Reign is looking to implement a strategy used by the Canadian national team after the squad held a seminar on LGBTQ inclusion (with a focus on trans inclusion).

“I think it was a really great point for us as a team, for folks to feel more comfortable talking about these conversations… I think the national team has set a precedent there, and folks are trying to follow in their own respective national team or pro environments, which is exciting to see,” they said.

For now, Quinn will focus on enjoying the Celebration Tour with their teammates – even though they still have a hard time believing they’re an Olympic gold medallist.

“Oh, gosh. I don't think it's fully sunk in. I think I go through waves of thinking that I've realized it, and then thinking about winning gold again, and it's like a surprise to me again,” they laughed.

“I've spoken to former Olympic medallists, and they say the same thing – it probably takes 15 years to fully realize what's happened. So, I think I have a little ways to go in that.”