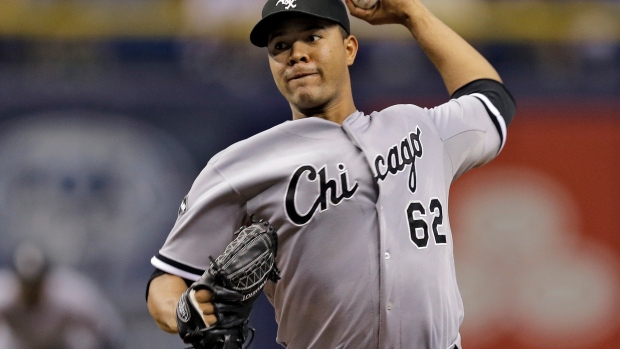 "It's definitely no fun when you come to the park and you know you're not going to be playing in October," Hellickson said after giving up four runs and seven hits in 4 1-3 innings of Tampa Bay's 4-3 loss to the Chicago White Sox on Friday night that eliminated the Rays from playoff contention.

"In the four or five years I've been here I haven't been involved in too many games that haven't meant anything."

Jose Quintana pitched into the eighth inning and Avisail Garcia had a two-run double for the White Sox. Chicago rookie Jose Abreu also had a run-scoring single during a four-run fifth, giving him 104 RBIs for the season.

"We put ourselves in a significant hole (they were 24-42 on June 10) and it's been really hard to dig out," Rays manager Joe Maddon said. "To not be involved in the post-season is no fun. We expect to be there on an annual basis."

The Rays reached the playoffs four of the preceding six years.

Tampa Bay had a chance to tie the score in the seventh when Ben Zobrist hit a two-out double off the glove of second baseman Marcus Semien, but Semien recovered the ball in time to throw out Kevin Kiermaier at the plate. Kiermaier was attempting to score from first base after his single.

"I never criticize (Kiermaier) because he's always aggressive," Maddon said. "Their guy picks it up and throws a strike at the plate. Out. There's no guarantee that he would have scored on the next hitter doing something."

Logan Forsythe drove in Tampa Bay's runs with a two-run double in the first and a leadoff home run in the fourth, his sixth of the season.

"After the homer, I think he just really settled down and was aggressive," said White Sox manager Robin Ventura. "Really it's kind of a calling card of his. He gets stronger as the game goes along."

Zach Putnam got the last two outs, striking out Kiermaier with two runners on in the ninth to earn his sixth save.

Hellickson (1-4) failed to get through the fifth inning for the third time in his last five starts.

"It's just happened so many times this year with guys giving me a three- or four-run lead, and I throw four or five scoreless and then just lose it the next inning," he said.

White Sox: 1B Paul Konerko, retiring after the season, played for the first time since breaking his left hand in a Sept. 2 game against Minnesota.

Rays: IF Sean Rodriguez was not with the team because of a death in the family. ... CF Desmond Jennings (sore left knee) is no longer listed as an extra player on the clubhouse lineup card and is expected to miss the rest of the season.

White Sox RHP Hector Noesi (8-10) and Rays RHP Chris Archer (9-8) are Saturday night's scheduled starters. Archer has allowed a homer in four consecutive starts. He had never given up a homer in more than two straight games prior to this stretch.

Tampa Bay INF-OF Ben Zobrist was named as the Don Zimmer Most Valuable Player by the local BBWAA chapter. The Rays MVP award was re-named this year for Zimmer, the Rays senior adviser who died in June.