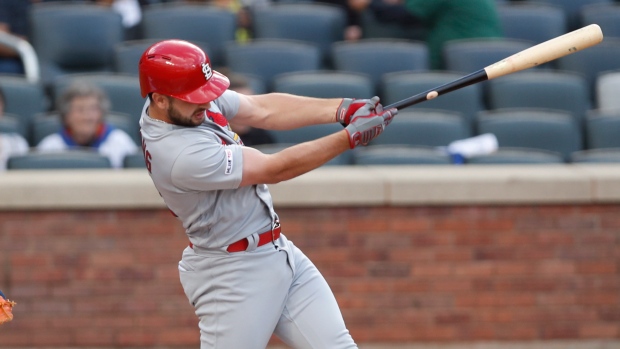 Not that this odd double feature shocked Mets fans, either. They've seen this horror show before.

Dexter Fowler hit a go-ahead, three-run homer moments after DeJong's tying shot in the eighth inning, and the Cardinals rallied to beat the Mets 9-5 and sweep an unusual pair of games. Hours earlier, DeJong helped the Cardinals complete a comeback that started the night before, grounding an RBI single against Edwin Díaz in the 10th inning of a 5-4 win.

The series opener Thursday was suspended following 8 1/2 innings, right after Harrison Bader drove in the tying run with a two-out double off Díaz in the rain. It took St. Louis 18 minutes to complete the victory after play resumed Friday.

"Good day all around," Shildt said.

DeJong tied the late game at 5 with a leadoff homer against Jeurys Familia (2-1). It was DeJong's 12th homer of the season, including one off NL Cy Young Award winner Jacob deGrom on Thursday.

After a double by Yadier Molina and a walk by Bader, Fowler drove a ball into the visiting bullpen in centre field, admiring the shot and taking an easy jog around the bases.

"That's what good teams do," Shildt said. "They punch back immediately."

Familia gave New York its major league-leading 16th blown save. He was booed loudly after striking out pitcher John Gant to end the inning and has a 6.91 ERA after signing a $30 million, three-year free agent deal this off-season.

"This guy's with us for three years, we're going to not give up on him," manager Mickey Callaway said. "He's not going to give up. We're going to continue to work diligently every day to help him improve. That's what you have to do. That's what we'll do and we're committed to that."

DeJong's homer steadied St. Louis following a rocky seventh. New York rallied for three runs after loading the bases against Andrew Miller with no outs. The big blow was a go-ahead, two-run single by Wilson Ramos off Gant (6-0) to put the Mets up 5-4.

Jose Martinez gave St. Louis a 4-1 lead with a three-run, pinch-hit homer in the fifth off Steven Matz.

Matz hit a leadoff homer in the bottom of the inning, becoming the fourth Mets starter to go deep this season. The pitching staff entered the night tied with Arizona for the major league lead with four homers.

Kolten Wong added a leadoff homer for the Cardinals in the ninth. Tommy Edman doubled for his first major league hit in the third and scored on Matt Carpenter's sacrifice fly.

New York made two errors in the late game, bringing its total to an NL-most 50 through 69 games.

In an unusual scene, Thursday's game resumed at 6:10 p.m. Friday with no anthem, no ceremonial first pitch, no player introductions — none of the hubbub that usually accompanies the start of a big league game. A small crowd at Citi Field saw Carlos Martinez (1-0) pitch a 1-2-3 bottom of the ninth, and Díaz (1-4) then jogged out of the bullpen to continue his outing.

Pinch-hitter Yairo Muñoz led off with a single, stole second and advanced to third on Carpenter's groundout. DeJong followed by grounding a ball into left field to score Muñoz.

Jordan Hicks pitched perfectly through the bottom of the inning for his 14th save.

"Carp said right before the game, 'We're about to win this game in 20 minutes,'" DeJong said.

St. Louis rallied for two runs off Díaz in the ninth Thursday after first baseman Pete Alonso and other Mets players lobbied hard to keep the game going. Alonso logged onto Twitter between games Friday and responded to criticism over his decision to shoo away the tarp. Some suggested that if the Mets had kept quiet, the umps would've left the tarp on the field and not taken it off, resulting in a Mets win.

"Are you kidding me? Why are you mad at me for having confidence in my teammates?" Alonso wrote . "I'm a damn competitor and I'll take my team over any one else any day. A real Mets fan doesn't talk like that. Clean it up."

Cardinals: RHP Dominic Leone was recalled from Triple-A Memphis to be the 26th man for the second game.

Mets: OF Brandon Nimmo was scratched from a rehab appearance with Triple-A Syracuse with neck stiffness. Nimmo hasn't played since May 20. ... RHP Robert Gsellman said he had a stiff back after pitching a scoreless inning in the late game. He was treated and will be re-evaluated Saturday. ... 2B Robinson Canó (left quadriceps) was in the lineup for Syracuse. ... RHP Taylor Bashlor was brought up from Triple-A Syracuse to be New York's 26th man.