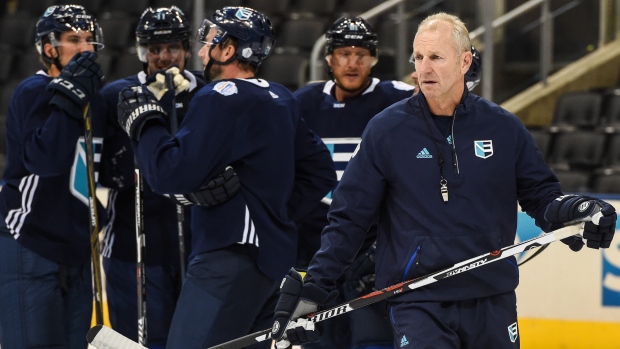 The Buffalo Sabres named Ralph Krueger as the 19th head coach in the team's history on Wednesday.

The 59-year-old most recently spent five years as the chairman of Southampton in the English Premier League. He was dismissed from the position in April.

“Throughout his career, Ralph has shown the ability to adapt to a variety of high-pressure environments while leading some of the world’s elite players,” Sabres general manager Jason Botterill said om a team release. “His strong communication skills, leadership and diverse background make him a uniquely qualified candidate to lead our team going forward.”

We found our guy.

Krueger coached the Edmonton Oilers during the lockout-shortened 2012-13 season. The team posted a 19-22-7 record and missed the playoffs. He was fired at the conclusion of his only season in charge of the team.

TSN Hockey Insider Pierre LeBrun reported Krueger's contract with the Sabres is believed to be for three years and between $11.5-$12 million.

Not confirmed but my understanding is that Ralph Krueger’s deal with Buffalo is for three years and worth ballpark of $11.5 million - $12 million total. So sounds like just under $4 million average per year

“I am excited and honored to join the Buffalo Sabres family and will strive to maximize the potential that lies within this team,” Krueger said. “I look forward to building on the many positives that have been established within the organization and I am especially eager to get behind the bench and represent this passionate hockey city.”

The Steinbach, Man., native was also the head coach of Team Europe at the 2016 World Cup of Hockey. They were defeated by Canada in the best-of-three final.