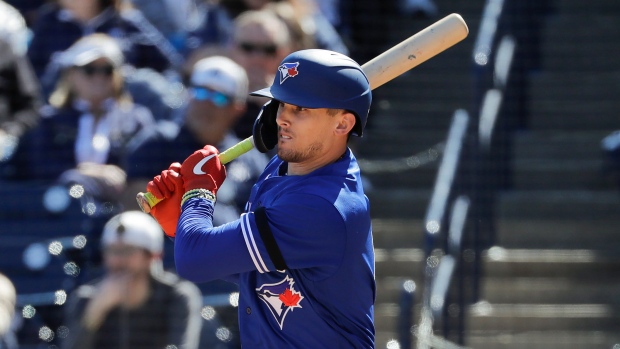 DUNEDIN, Fla. — Centre-fielder Randal Grichuk scored the go-ahead run on a balk in the bottom of the third inning, and the Blue Jays held on to defeat the Atlanta Braves 4-3 on Monday in Toronto's spring training home opener at TD Ballpark.

Grichuk also drove in a run with a double in the bottom of the first inning.

Second baseman Cavan Biggio hit a run-scoring double and stole a base and catcher Danny Jansen walked in another run as the Blue Jays improved to 2-0-1 in the Grapefruit League.

Starting pitcher Shun Yamaguchi, who signed with Toronto in the off-season after spending the first 14 years of his career in his native Japan, allowed three runs on three hits and one walk through 2/3 of an inning in his Blue Jays' spring debut.

Ken Giles earned the win after pitching a perfect inning of relief with one strikeout.

Ian Anderson shouldered the loss for Atlanta (1-2). The 21-year-old right-hander allowed two hits, one run and two walks in 2/3 innings.

Monday's matchup marked the first live game played at the newly renovated Dunedin stadium, which had more seating added to it during its off-season overhaul. Announced attendance was 6,335, the largest crowd ever at the ballpark.

Toronto opened its exhibition schedule with weekend a road win over the New York Yankees and a tie against the Minnesota Twins.

Note to readers: This is a corrected story. A previous version had the wrong record for the Blue Jays