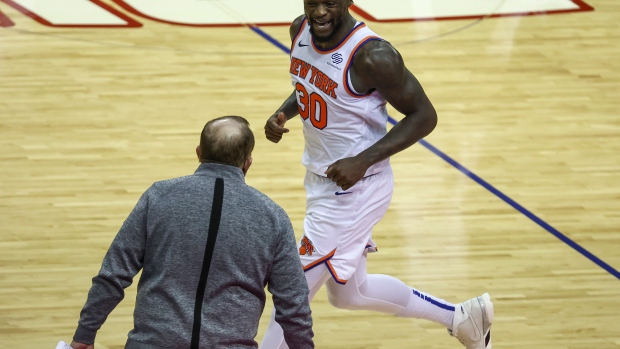 HOUSTON — Julius Randle scored 31 points in three quarters to lead the New York Knicks to a 122-97 victory over the Houston Rockets on Sunday night.

Randle, who had seven rebounds and six assists, scored 15 points in the third quarter to pad the lead and spent the fourth quarter on the bench with the game out of reach.

“We turned it up I the second half," Randle said. “Made good plays, defence tightened up and we busted the game open."

It was the 11th victory in 12 games for the Knicks and the seventh loss in eight games for the Rockets, who have the NBA’s worst record at 16-49.

New York also beat Houston in the first meeting this season on Feb. 13 to win the season series for the first time since 2002-03. It’s just the second win for the Knicks in Houston in 16 trips, with the last one coming on Nov. 21, 2015.

Randle continued his recent stellar play by scoring at least 30 points for the fourth time in five games. It’s the 13th time this season that he’s finished with 30 points or more.

The Rockets scored five straight points, punctuated with a dunk by Christian Wood, to cut the lead to 73-64 with about 5 minutes left in the third quarter.

But Randle made an off-balance layup a few seconds later before making consecutive 3-pointers to extend New York’s lead to 81-64 with 4 minutes left in the quarter.

After his second 3 in that span a small but vocal group of Knicks fans began chanting: ‘MVP, MVP.’

Jae’Sean Tate ended the run with a layup for the Rockets, but New York scored the next seven points, with 3s from Reggie Bullock and Derrick Rose to make it 88-66 with about 2 minutes left in the third.

The Knicks had a 20-point lead about a minute later when Randle got going again, scoring five quick points to push the lead to 93-68.

“The demoralizing feeling that you get especially with a young team and the emotions that go with it, that happened again tonight," Houston coach Stephen Silas said.

Wood had 19 points and eight rebounds for the Rockets who struggled from long-range, making just 8 of 35 3-pointers.

New York was up by 28 in the fourth quarter before using a 7-0 run to make it 117-82 with about 5 1/2 minutes remaining, and all the starters for the Knicks went to the bench soon after that.

Rockets: Kelly Olynyk had 17 points, 10 rebounds and seven assists. ... Bradley started after missing the last two games with right leg soreness and had seven points. ... Danuel House Jr. missed his third straight game with a sore right ankle. ... D.J. Augustin missed his 11th game in a row with a sprained left ankle. ... Coach Stephen Silas said that Eric Gordon, who has been out since March 11 with a strained groin, is getting better and could return this season.

Rose, who scored 24 on Sunday, is starting to feel like himself again after missing eight games following a COVID-19 diagnosis in late February. But he still has some work to do.

“I’m still trying to drop some pounds," he said. “During COVID I gained some weight. I was eating a little. I’m trying to do extra conditioning. I’d like to lose two or three more pounds."

Knicks: Play at Memphis on Monday night in the second game of a six-game road trip.

Rockets: Host Philadelphia on Wednesday night before going on a four-game road trip.