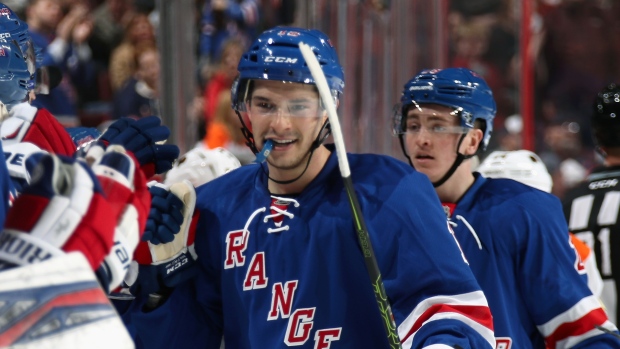 The New York Rangers have agreed to terms to terms with forward Matt Puempel, meaning they will now meet the required needs for the Vegas expansion draft.

The Rangers only had one forward under contract for 2017-18 to expose in the expansion and needed to sign a second or face punishment from the league.

OFFICIAL: #NYR have agreed to terms with forward Matt Puempel on a new contract. pic.twitter.com/7dtIaTjGEL

Puempel, a restricted free-agent, played exactly 40 games (the minimum to be exposed) last season, scoring six goals and adding three assists. He was claimed off of waivers from the Senators in November after playing 13 games with Ottawa. He was critical of Guy Boucher and the Senators organization after being waived.

A first-round pick of the Senators in 2011, Puempel owns 10 goals and five assists in 79 career games. Puempel isprojected by TSN Hockey to be exposed to be Vegas along with Derek Stepan at forward.

With Puempel signed, the Rangers still have five restricted free agents this summer in Brandon Pirri, Mika Zibanejad, Jesper Fast, Oscar Lindberg and Adam Clendening. Though, over the weekend, Larry Brooks of the New York Post reported the team is not expected to qualify either Pirri or Clendening, allowing them to become unrestricted free agents.