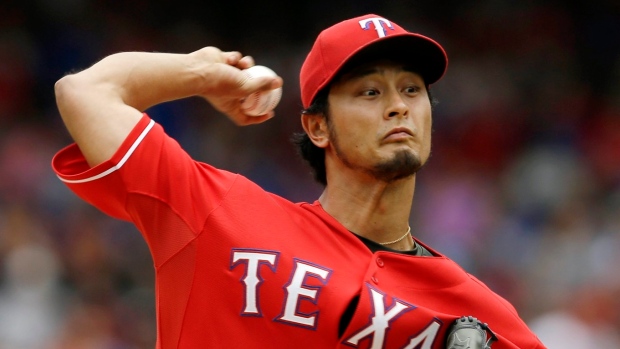 (SportsNetwork.com) - It's always good to have an ace.

Though their 2014 season has already shown signs of coming off the rails, the Texas Rangers will turn to one of their few reliable commodities on Thursday night when they return to Camden Yards to wrap up a four-game series with the Baltimore Orioles.

Staff ace Yu Darvish went through a brief two-start skid in which he allowed 12 runs in 11 innings of consecutive losses, but he recovered well enough to toss eight scoreless innings in a 5-0 defeat of the Minnesota Twins on Saturday.

Problem is, the mojo hasn't carried over to the mid-Atlantic coast.

Texas has dropped four games in a row -- including the first three of the series with the Orioles -- and 12 of 14 overall. Their eight-game losing streak on the road is their longest since 2005.

Darvish has made one career start against Baltimore and was a 5-1 loser in the 2012 American League Wild Card game after allowing two earned runs in 6 2/3 innings. His manager, Ron Washington, said he had no real concerns even as Darvish skidded through the two recent starts.

"I thought he was Yu Darvish again," Washington said. "I don't care how good you are. There will be bumps in the road. There will be times when things don't go right. And that even can happen for Yu Darvish."

Texas has won 90 games or more for four straight seasons, but is already 10 games below .500 slightly past the halfway point of 2014.

"We certainly had some opportunities," Washington said. "We just didn't get it done."

Baltimore has bludgeoned Texas pitching to the tune of 21 runs in the first three games of the series and the Orioles have homered at least one time in 12 consecutive games.

The Rangers have lost 10 of 11 games with Baltimore and five in a row at Camden Yards.

"It's the sum of the parts, for sure," Baltimore's Ryan Flaherty said. "It can't be the same guys every night. It's an opportunity for other guys to get in there and try to contribute and help the team win."

Orioles starter Wei-Yin Chen takes the mound and will try and erase the memory of a 3 1/3-inning start against Tampa Bay in his most recent outing on Saturday.

Prior to that 5-4 loss, which was the shortest start of his career, Chen had been unbeaten in five starts with a 2.61 earned run average.

"For every game, you don't want to give up any home runs," Chen said. "Lately, I've been leaving more pitches up in the zone. (If) I don't make the adjustments necessary, the results are going to look bad. So I'm going to look at that."

On Wednesday, Flaherty's go-ahead home run in the seventh proved to be the difference as the Orioles again relied on the long ball in a 6-4 victory.

Adam Jones also homered and drove in three runs for Baltimore, which has homered nine times in the first three games of the series.

Brad Brach (2-0) earned the win after pitching 1 1/3 scoreless innings and getting out of a bases-loaded jam in the sixth. Starter Chris Tillman gave up four runs -- three earned -- on seven hits with four walks and two strikeouts across 5 2/3 frames.

Adrian Beltre doubled among his two hits and drove in two runs for the Rangers.

Texas starter Miles Mikolas, who made his first career start, was in line for the win after allowing just three runs and three hits with four strikeouts before the bullpen gave up the lead.