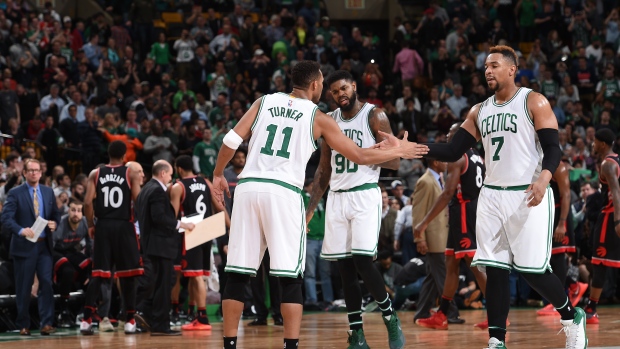 BOSTON - The Toronto Raptors lost a game but clinched a playoff spot anyway.

That was little consolation for Raptors coach Dwane Casey.

Avery Bradley finished with 16 points and eight rebounds as the Celtics won their third consecutive game and first this season over one of the Eastern Conference's best teams.

"It's big," Thomas said. "We wanted some confidence and momentum going into this tough West Coast trip and we got it. We wanted these three games and we got them."

Boston had what had been an eight-point lead at the start of the fourth quarter cut to a point. But the Celtics responded with a 10-4 run to get the separation they needed to close it out.

Toronto had a four-game winning streak snapped and fell 2 1/2 games behind Cleveland for the best record in the Eastern Conference.

In addition to Lowry, Toronto also played without forward Patrick Patterson, who missed his second straight game with a sore left ankle. The Celtics remained without starting forward Jae Crowder as he recovers from a right ankle sprain.

Toronto trailed 69-58 late in the third quarter before using a 10-0 run to get back into the game. The Celtics missed eight straight shots during the run.

The first half was tight throughout, with 10 lead changes and neither team holding more than a three-point lead.

The victory ensured the Celtics will finish with at least a .500 record — its first since coach Brad Stevens took over three years ago.

"I feel like there's real progress. And it's pretty consistent progress," Stevens said. "But...you don't sign up to come to the Boston Celtics to win 42 games. So we've got a long way to go."

Casey isn't above resting his players heading into the final month of the season. In fact, he will prioritize that over anything that has to do with the standings. "Health is more important," Casey said. "I think we are all fighting for it, but if it comes between a guy fighting a sore ankle, a sore calf, a sore knee or whatever fighting for that spot. My team's health is more important than putting him out there and maybe further damaging him."

Marcus Smart continues to struggle with his shot. One of the offensive anchors of the second unit, Smart was 1 for 8 from the field against the Raptors. He is now just 16 for 62 in his last six games.

Stevens said the plan is still for Crowder to travel with the team on its upcoming five-game road trip. But he said Crowder isn't expected to be available during the early part of it. Crowder was able to do some light shooting prior to Wednesday's game.

Actor Mark Wahlberg, a native of nearby Dorchester, sat courtside.

There was a pre-game moment of a silence in honour of the victims of Tuesday's terrorist attacks in Brussels, Belgium.