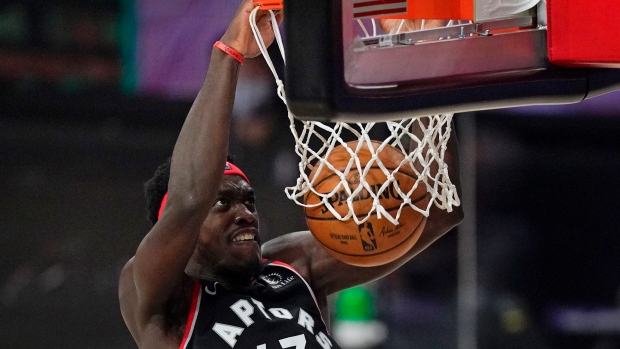 LAKE BUENA VISTA, Fla. — Nick Nurse had a smile on his face when he asked Kyle Lowry a couple of times during Saturday's game if he needed a break.

Two nights after Lowry logged the most minutes of any player in a non-overtime game this season, the 34-year-old had no plans on taking it easy. And now the Eastern Conference semifinals have become a best-of-three series.

"I did check with him, a couple of times, (but) I was joking, I asked him if he needed a sub with a smile, he'd chew me out, 'I don't need one,'" Nurse said with a laugh.

Lowry had 22 points, 11 rebounds and seven assists in another workmanlike performance, while Pascal Siakam had 23 points and 11 rebounds, and the defending NBA champions beat the Celtics 100-93 to even up their best-of-seven series at two games apiece. Game 5 is Monday.

"I think we can always get to another level. I feel like we can always do that and obviously everyone clicking at the right time, and once we have that we're a pretty special team," Siakam said after his best game of the series.

Serge Ibaka had 18 points and seven boards. Fred VanVleet chipped in with 17 points, and Game 3 hero OG Anunoby had 11 points.

Jayson Tatum had 24 points and 10 rebounds, while Kemba Walker had 15 points for the Celtics.

"When anyone comes out that aggressive it usually gives us a boost, but he obviously is our team leader and our veteran and when he does it, it automatically gets everybody a burst of energy, focus and confidence," Nurse said.

The Raptors survived a horrible second quarter, and found their offensive groove in the third. They had six three-pointers in the quarter to lead by as many as 11 and were up 81-73 with one quarter to play.

Jaylen Brown's shot from behind the arc sliced the difference to five points with 5:14 to play. But Lowry, coming off his marathon performance of 46 minutes and 29 seconds in Game 3, replied with a three-pointer.

Brown connected on a three, then Smart converted a three-point play and it was a five-point game with 57 seconds left. But that was as close as the Celtics would come, and the Raptors improved to 3-5 against Boston this season.

Siakam, VanVleet and Lowry all logged over 43 minutes Saturday.

And while Nurse did call a time-out with just under four minutes to play to give Lowry a breather, the Raptors' three top offensive threats wouldn't have it any other way.

"If you're ever going to do it now's the time to do it," VanVleet said. "There's nothing to be resting for, there's no tomorrow. There's no way to manage it and coach is putting his trust in us and communicating to a level where if you need a rest you get one, if you need him to call a timeout you get one — but right now I think he's rolling with the big guns and that's the way that we like it."

The victory vaulted Nurse, who was recently named the NBA coach of the year, past Dwane Casey for most playoff victories in franchise history with 22.

Nurse didn't think the thrilling Game 3 finish would derail their focus — the Raptors played well in a Game 1 loss against Milwaukee after Kawhi Leonard's buzzer-beater against Philadelphia.

"I think we made it a little bit tougher for them tonight but they still had a lot of shots that they were able to get off," Lowry said. "We're just trying to contain those guys: Tatum, Brown, Walker even (Marcus) Smart. We've just got to continue to make it tough on those guys."

Siakam's emergence was a good sign for Toronto. The forward from Cameroon, who had huge shoes to fill after Leonard left in the off-season, had struggled mightily in the NBA bubble at Walt Disney World.

Did his confidence take a beating?

"It's just a fine line between makes and misses," Siakam said. "If one of those hit the rim another way, it's a different story. That's literally what it is. I'm just gonna continue to do that. I can't change who I am. I'm going to continue to play the way I've been playing. It's just a matter of time."

The Raptors shot 38.6 per cent from three-point range while Boston shot just 20 per cent.

Lowry set the pace with 11 first-quarter points, and the Raptors went up by seven points early. Toronto led 31-27 to start the second.

The Raptors' offence ground to a halt in the second and the Celtics took their first lead of the game with 2:11 left in the quarter. Toronto shot 3-for-13 in the frame and scored just nine points over a woeful seven-minute stretch that VanVleet ended with a three-pointer with 0.9 seconds on the clock. The teams went into the locker-room at halftime tied at 49-49.

This report by The Canadian Press was first published on Sept. 5, 2020.