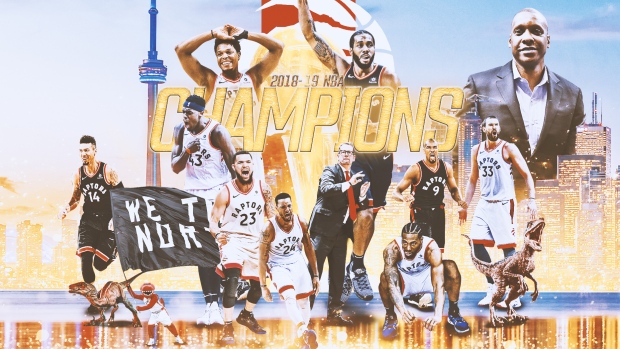 OAKLAND – It started with a sleepless night on the other side of the planet 11 months earlier.

Masai Ujiri was in Africa, where he and former U.S. president Barack Obama had just opened a children’s basketball court in Kenya, when he pulled off the biggest trade in the 24-year history of the Toronto Raptors – a seminal moment for the franchise and the sport in Canada.

He and his front office staff had been doing their due diligence for weeks, but the deal came together quickly. Ujiri spent the evening of July 17 working the phones and ironing out the details. He paced outside of his hotel room as his family slept. Then, just as the sun was coming up, it was done.

Toronto had acquired Kawhi Leonard and Danny Green from San Antonio for a package headlined by DeMar DeRozan. The franchise had never employed a player like Leonard before – a two-way, MVP calibre, superstar talent. There were concerns – his health, his interest in playing for Canada’s only NBA club, and his impending free agency – but they believed the reward outweighed the risk.

The Raptors had been a good team for years, but this gave them a chance to be great.

On Thursday, June 13, 2019 – nearly a full year later – it paid off as well as anybody could have possibly imagined.

For the 73rd time in the history of the league, the NBA crowned its champion. For the first time ever, the team holding the trophy was one based outside of the U.S. The Toronto Raptors had won the title.

With their 114-110 series-clinching win over the reigning two-time champion Golden State Warriors – one of the greatest dynasties the game has ever seen – in the final game at Oakland’s Oracle Arena, the Raptors made history.

Whether you recently hopped on the bandwagon, are a fan of over two decades, or fall somewhere in between, if you have even a basic knowledge of the organization and its journey from the NBA’s outhouse to penthouse this was a surreal moment.

It was the culmination of years of heartbreak – the losing seasons, botched lottery picks, disgruntled franchise players that forced their way out, and the unceremonious playoff exits. Anything that could go wrong would go wrong, until now.

It’s also the result of years of work, building a foundation, and contributions from many folks on and off the court – some which are still in the organization and many that aren’t.

After missing all but nine games with a quad injury last season – his last of seven with the Spurs – and biding his time during his first and perhaps only campaign in Toronto (“There’s 82 games and for me these are just practices,” he said in March), Leonard has been on a mission throughout the playoffs. He’s put up historic numbers and produced iconic moments en route to his second career championship and Finals MVP award.

He wasn’t just as good as advertised, he was better. To say that this is what Ujiri expected when he made the trade would be a stretch – like the rest of us he wasn’t quite sure what to expect from Leonard – but it’s what he envisioned as the best-case scenario. He knew what Leonard was capable of and how good this team could be. He believed he owed it to the franchise and the city and country it represents to take the shot.

Ujiri worked under former Raptors general manager Bryan Colangelo during one of the team’s darkest eras. Chris Bosh had just left to join LeBron James and Dwyane Wade in Miami, which sent Toronto into a franchise-long five-year playoff drought.

When Ujiri returned and took the post atop Toronto’s front office in 2013, he promised to bring a championship north, as farfetched as that seemed at the time. That was the goal, as much to empower a city had passion for and to help grow the sport throughout Canada.

A Raptors championship would be bigger than just the team or even the city. Unlike any other title-winner that came before it, this one would have the reach to inspire an entire nation, something that Ujiri always understood and took seriously.

Roger Murray remembers taking his three-year-old son, Jamal, to a Vince Carter basketball camp in the Greater Toronto Area in the early 2000s.

The young Murray, who grew up in Kitchener, Ont., was in the crowd as his hero walked into the gym. After asking for his father’s permission, Murray yelled out Carter’s name. The Raptors’ star looked at him and waved. Neither Murray, father or son, ever forgot it.

Almost two decades later, Murray is a rising NBA star in his own right. He is coming off a breakout third season with the Denver Nuggets and if he isn’t already the league’s best Canadian player he’s certainly trending in that direction.

He remembers going to Raptors games as a kid and watching Carter play live at Scotiabank Arena, formerly the Air Canada Centre. At his peak, Vinsanity may have been the brightest star in the game. Like many other young Canadian basketball fans, Murray marvelled at what Carter could do on the court and the way in which the high-flyer took his favourite team to new heights.

The Raptors hadn’t even made the playoffs prior to the Carter era. It was cut short, but despite the ugly breakup between player and team, Carter is widely credited with putting Toronto on the NBA map and inspiring the influx of Canadians that have broken into the league over the last decade. Canada had been hockey country, and probably always will be, but suddenly basketball was on the radar.

Since 2011, Canada has produced 11 first-round draft picks, including eight lottery selections and two first-overall picks. 13 Canadians appeared in an NBA game last season, a league-record 14 the season before. Many of them have cited Carter and the rise of the Raptors in the early 2000s for their initial interest in the sport.

They’ll never forget where they were when Carter won the dunk contest, coincidently in Oakland, or when he went head-to-head with Allen Iverson in that thrilling seven-game series with Philadelphia. Once they were old enough to reach the rim they would emulate his highlight slams.

It took over 10 years to see and truly appreciate the affect Carter had on hoops north of the border and it’s reasonable to expect Leonard’s heroics and the Raptors’ first NBA championship to have an even bigger long-term impact.

“For them to get this far and the support that they have from all of Canada is amazing,” Murray told TSN. “It’s already done a lot and it’s going to do a whole lot more.”

“It’s going to be monumental, honestly,” said Nik Stauskas, the 25-year-old former 8th-overall pick, who finished last season with the Cleveland Cavaliers. “I was part of the Vince Carter era, I grew up watching him, but we never had winning teams here in Toronto. They were teams that maybe made the first round, maybe second round, but never made any more buzz than that.”

“And to think that there’s going to be 9-year-olds, 10-year-olds all around this country that are now going to turn on their TVs and say, ‘Wait, the best basketball team in the world is right here in Canada, right here in Toronto? I can go and see them play? Kawhi Leonard, one of the best players in the world, I can go see him play in person?’ It’s going to spark a whole new interest where 10-to-15 years down the road, maybe there’s 40 or 50 Canadians in the NBA. Who knows? Maybe it’ll get to that point, we’re certainly on the way right now. It’ll be exciting to see how far this goes, but I think we’re only going to see the results 10 years down the line when the kids become 17, 18, 19-years-old and then you’re going to see how much talent there is in this country, how many kids are playing the game just because of this team right now. So it’s going to be cool to see.”

The Raptors have been shattering viewership records throughout this postseason run. An average audience of 6.4 million people saw the Raptors come one shot away from the championship in Game 5, making it the country’s most-watched NBA broadcast on record. The previous mark was 4.9 million in Game 4. Each game in the Finals has set a new Canadian NBA ratings record.

To put that into perspective, the Blue Jays never eclipsed 5.1 million during their recent playoff appearances in 2015 and 2016. Through the first five games, 50 per cent of the Canadian population watched all or part of the 2019 NBA Finals.

Even on a rainy day in Toronto for Monday’s Game 5, the line to get into Jurassic Park – the public square outside of the arena – was wrapped around the building hours before tip off. The fans at the front had camped out there since Saturday afternoon.

The excitement hasn’t been limited to Toronto with massive viewing parties popping up around the country, even in places you wouldn’t necessarily associate with basketball. Thousands of Saskatchewan fans packed Mosaic Stadium in Regina, home of the Roughriders of the Canadian Football League, to watch Monday’s game. Fort Calgary hosted an outdoor viewing party in Alberta for Game 6.

“Canada has had basketball for a long time, but when the Raptors first came to town it served as a catalyst and I think this is going to be a huge catalyst to get more people playing, more people appreciating the game, more people enjoying the game,” said Glen Grunwald, president and CEO of Canada Basketball and former Raptors GM. “And so I could see basketball continuing to grow, in large part because of this. Everyone loves a winner and everyone likes to be part of it, and I think more people now are seeing what a fun game it is and how exciting it is to watch. I think it’s only good for basketball what’s happening here.”

In time, it’s not hard to imagine an even bigger wave of young Canadian talent coming up and crediting this run for choosing basketball over hockey, baseball, soccer or any other sport.

How many future NBAers were in Jurassic Park to witness and celebrate history on Thursday? Maybe they were in the building to watch the Raptors’ double-overtime win over Milwaukee in Game 3 of the Conference Finals. Maybe they went out to the driveway or the park to mimic Leonard’s winning fall-away from the baseline after the team’s season-saving Game 7 victory over Philadelphia.

“There will be generational stories that’ll be told forever,” said NBA hall-of-famer and the Raptors first ever GM. “I was talking to (Raptors senior basketball adviser) Wayne Embry and he was talking about Craig Ehlo guarding Michael Jordan and still 30 years later they call it The Shot. This is [the new] The Shot, and families for generations forever will be talking about this, this shot, this moment and what the Raptors did for Canada and for the city.”

The biggest season in the history of the Toronto Raptors – and perhaps the most pivotal for basketball in Canada – started with a sleepless night for Ujiri. Fittingly, it ended with what you would imagine to be a sleepless night of celebration for the team and many of its fans across the nation.