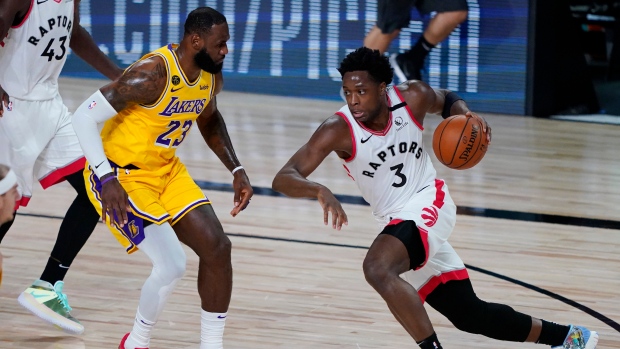 TORONTO – It’s hard to imagine the Toronto Raptors putting together a better regular season than the one they just completed, which is probably why so few saw it coming.

Despite losing two starters – including the Finals MVP – and registering the fifth-most man games lost due to injury, the defending champs finished the abbreviated campaign with the league’s second-best record and had the highest winning percentage (.736) in franchise history.

“It was a pretty good one, I think,” said head coach Nick Nurse, laughing at his understatement, just before his team defeated Denver on Friday to go 7-1 in the NBA bubble. “A lot of people didn’t expect us to have this kind of season but a lot of guys stepped up [and there was] a lot of growth for a lot of players. I think our defence was great. There was a lot of resiliency considering we had a lot of injuries, too…  Just a good top-to-bottom effort by the crew for certainly the first 60-plus games, and then to re-gather and keep it rolling once we got here. It’s good. It’s a joy to be around this team.”

It’s not unusual for a tittle-winning club to come back the following season and improve on their success, but to do so without their best player – and without adding a replacement – isn’t just impressive, it’s unprecedented.

While the continued growth of first time all-star Pascal Siakam has helped fill the void left by Kawhi Leonard, it’s been a collaborative effort. They’ve gotten contributions from up and down the roster.

The Raptors are the first team to have five players average 15 points or more – and play at least 50 games – in a season since the 1973-74 Buffalo Braves (Siakam, Kyle Lowry, Fred VanVleet, Norman Powell and Serge Ibaka). That’s a product of the injuries, opening up opportunities for some guys who wouldn’t have gotten them otherwise, but it’s also a reflection of their depth.

“This is not tennis,” said Marc Gasol. “We’re not talking about Rafa Nadal or [Novak] Djokovic or Roger Federer or [Milos] Raonic, for you [Canadians]. We’re talking about basketball. It’s a team sport. I know we as fans of the game and media we do a tremendous job of trying to make this about players, about single players.”

“But this is about a team, and always will be about a team. It’s how well you work as a team. It’s how well your talents complement the best players or the star player’s talents, and every team meets together with the coaching staff and the fans and so forth. It’s a team effort. It always will be. Doesn’t matter how much we try to singularize the game.”

He’s not wrong. It’s very tough to win in the NBA, let alone to win a championship, on the strength of one player, regardless of how great that player is. Still, there’s a reason why superstars tend to shine brighter in basketball than they do in any other team sport.

There are moments in big games, and certainly in a playoff series, where the very best players can take over, like Leonard did for Toronto at various points throughout last year’s title run. You need other great players, and complimentary pieces, and coaching, and a lot of other things. However, historically, most championship teams have also needed that transcendent talent.

As the Raptors get set to begin their title defence and open their first-round playoff series with Brooklyn on Monday, the big question is: will Siakam be that guy, and if not, can they defy the odds and compete for another championship without that guy?

The past 15 championship teams have each had at least one star who already won a Most Valuable Player award or finished in the top five in MVP voting. The last title-winning club that didn’t have an established MVP calibre player on its roster was the 2004 Detroit Pistons – a team that this iteration of the Raptors have been compared to.

Like these Raptors, those Pistons had a balanced offence, the league’s second-best defence, and they were tough and well coached. It’s exceedingly rare, but that group – led by Larry Brown and with great players like Chauncey Billups, Richard Hamilton, Rasheed Wallace and Ben Wallace – proved that it can be done.

“There’s a lot of special guys on this team,” Nurse said last month. “There might not be anybody that’s in the MVP conversation, but I’d put Kyle and Fred and Marc and Serge and Pascal into a category that’s pretty special. When Serge gets playing and blocking shots and making shots and stuff, he’s a big body. Marc’s as good as it gets at that position. Kyle and Fred are as tough as smart as [anybody]. Obviously Pascal continues to get better. And I didn’t even mention Norm and OG [Anunoby]. There’s some specialness individually and then there’s that little thing called chemistry and effort and toughness that I think make us a special team.”

Siakam, the reigning Most Improved Player, took another big step forward this season and didn’t look out of place in his first year as an offensive focal point. Despite his shooting woes during the seeding games, he and the team remain confident that he’ll be ready to lead them in the playoffs.

“I think he’s proven it,” VanVleet said. “I don’t know who’s setting the standard, but from my eyes I think he’s proven it. And I think if he goes out there and plays well, he plays well, and if he doesn’t, he doesn’t. The playoffs are just about performance each game, each night. It’s not about who you are as a player or what limits you [have] or what level of superstar you are. You’ve gotta play [well] each game and that’s all it really boils down to. So he’s more than capable and, obviously, we’re gonna do everything in our power to help him play well. But I’m not worried about Pascal at all.”

For the Raptors to reach their ceiling as a team, they’ll need Siakam at or close to his best. Still, it’s nice to know that they can still find ways to win on nights when he’s not. That’s the luxury of having a balanced offensive attack and an elite defence, and maybe that will help take some pressure off Siakam.

“I think it is an interesting kind of project that we have here in front of us,” Nurse said. “I love the different options and that so many different people can rise up and have big nights... But I also know that in tough playoff games you need somebody that can get you a bucket. You need somebody that can just get the ball, and put their head down, and score you one. Or step back and score you one, or whichever way. It’s just to kind of keep things ticking over, and keep momentum and spirit and all that stuff going. And that’s [Siakam’s] job. He’s done a tremendous job of that this regular season. I would imagine he answers every step-up-and-play call. He’s probably ready for that.”​