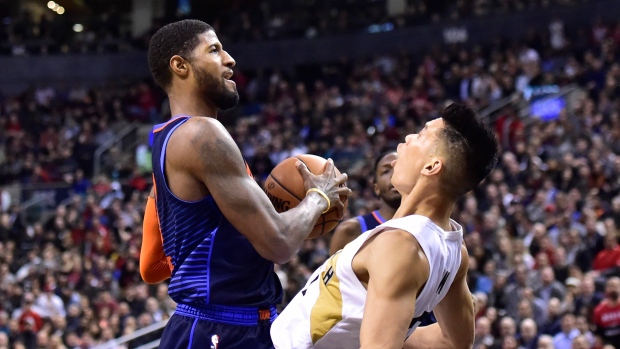 TORONTO — The Toronto Raptors are hoping Kawhi Leonard's fourth-quarter performance was a sneak preview of what they'll see from their star player in the post-season.

Leonard scored 20 of his 37 points in the fourth in an effort to carry his team to a victory, but the Oklahoma City Thunder had other ideas, beating Toronto 116-109 to avenge a loss two nights earlier.

"We've been seeing that, slowly," Fred VanVleet said of his teammate. "The urgency has been creeping up, a little more fire."

Paul George scored 28 points, while Russell Westbrook had 18 points, 13 assists and 12 rebounds, and Dennis Schroder chipped in with 26 for the Thunder (43-30), who snapped a four-game losing streak.

Will the Raptors see still another gear from Leonard from the ball is tossed up for the post-season?

"That's what we hope," said Green, who played with Leonard in San Antonio. "Obviously he has played at a high level in previous years before this year and in the playoffs and we hope he can reach that level or get back to that level and play at that level in the playoffs for us.

"We hope that everyone else plays at that level. Marc (Gasol) has had some great playoff runs. Serge has had some good ones. We are going to need everyone to come up and play their playoff basketball."

The Raptors had beaten the Thunder 123-114 two nights earlier at Oklahoma City, but not before blowing a 20-point second-half lead to force overtime.

Playing the second game of the back-to-back series, and their final game of the regular season against a team with a winning record, the Raptors led for most of the night, but saw their 13-point third-quarter advantage evaporate with 20-3 Thunder run.

Oklahoma City went into the fourth up 83-80.

The Raptors regained the lead briefly in the final frame, but consecutive three-pointers from George and Schroder — two of the 20 the Thunder had on the night — put the visitors up by 10 points in front of a capacity Scotiabank Arena crowd of 20,014.

The Raptors pulled to within four points twice down the stretch, including with 1:40 to play on a dunk by Marc Gasol — his only two points of the game. A pair of Westbrook free throws and a layup by Schroder iced the game for OKC with under a minute to play, sending fans pouring toward the exits.

Despite the loss, Nick Nurse liked what he saw from Leonard.

"I liked the force he was playing with offensively, right?" the coach said. "He did shoot 10 free throws which might be a record for this year but he could have shot another 10, to be honest. He was really getting jolted around on drives and hit a lot. They made him play through a lot of it and I thought he did, for the most part."

The Raptors were partly undone by 22 turnovers.

"You look down (at the box score), we shot 50 per cent, 52 per cent from three, 85 per cent from the line and you think, 'How are you not winning that game?'" Nurse said. "Then you look over at the turnovers, 22 of them, we had eight in the first quarter and still were in good shape."

Lowry sat for the second consecutive night with a right ankle injury, the fourth game in the last five he's missed.

"I think we're saying next week some time and day-to-day all in the same sentence," he said. "Just whenever that soreness goes away and he feels like he's ready to go, he's ready to go."

The Raptors shot a sizzling 69 per cent in the first quarter, and 83 per cent from three-point range, going ahead by eight points on a finger roll by Siakam late in the frame. Toronto led 29-22 going into the second.

The Thunder used a 14-4 run in the second to slice Toronto's 11-point lead to just a point. But the Raptors ended the half on a 9-0 run to head into the halftime break up 58-48.

The Raptors host Charlotte on Sunday and Chicago on Tuesday.