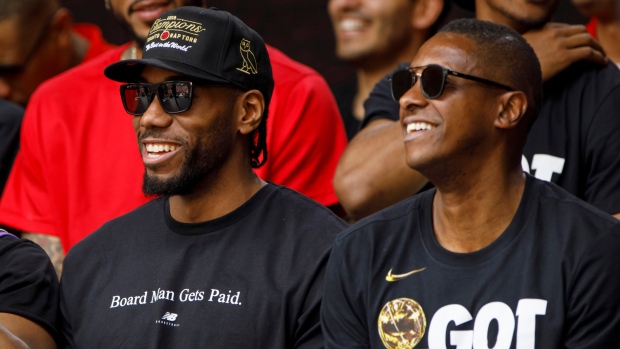 LAS VEGAS – Even in hindsight, the Toronto Raptors have no regrets.

They took their shot in trading for Kawhi Leonard a year ago, knowing the partnership could be short-lived. It was a low-risk gamble. His contractual status – in addition to his health concerns – was factored into the price.

There was always a reasonable chance he would leave the moment he could. No assurances were given. It was a leap of faith, but one they felt compelled to take. It was a rare opportunity to acquire a superstar, the type of player that could finally get them over the hump.

Leonard is gone now, off to his hometown to play with Paul George and the Clippers in Los Angeles, but it’s hard to argue it wasn’t worth it. The Raptors won the NBA championship, and that won’t ever be taken away from them, even though Leonard was.

The Raptors are the champs, and they’re carrying themselves like it at Las Vegas’ annual Summer League, but Leonard is very much the elephant in the room. Without him their chances of defending the title are slim. It’s a strange and unprecedented reality they find themselves in – celebrating the past while looking ahead to an uncertain future.

Still, you wouldn’t know it from listening to team president Masai Ujiri, who arrived in Vegas on Tuesday after a brief trip to Africa for a personal matter.

“Honestly, it’s on to the next,” Ujiri said, speaking publicly for the first time since Leonard made his decision early Saturday morning. “This is the NBA and this is how it works. I always say there’s no time to go out and cry. You can’t hide under the table and cry. Honestly, I’ve lost no sleep. I’m not disappointed. It’s on to what’s next. I’m telling Raptors fans and everybody, don’t lose one day of sleep, one second of sleep. We’re going to be just fine. We’re going to be all right.”

Understanding the unique nature of this particular recruiting process, the Raptors prepared for both scenarios – if Leonard chose to return they would run it back and try to repeat, if he left they would be forced to regroup on the fly.

They were confident going into free agency and remained confident until late in the process. That confidence began to waver after they met with Leonard and his uncle Dennis Robertson in Toronto last Wednesday, sources told TSN. That’s when they first questioned the intentions of Leonard’s camp.

Was Leonard upfront with Ujiri and the Raptors throughout the process?

“I think he was,” Ujiri responded, before pausing. “Kawhi was.”

“I know what we’re dealing with here and I appreciate what the process was,” he responded. “I know free agency, I know how it works. It’s not my first rodeo. You know things are going to go up and down. This was a different kind of free agency. It was high stakes and we understood that.”

The natural assumption is that Ujiri was making reference to Uncle Dennis.

Robertson has a reputation for being hard to deal with and would have been hands on throughout the process. According to sources, Leonard and his camp – namely Uncle Dennis – asked for a lot from the Raptors in that meeting, things players don’t generally ask for in standard contract negotiations.

In some cases, they were asking for things that Ujiri – one of the most well-compensated executives in the league – wouldn’t have even had at his disposal. Their requests were “unreasonable”, a source said, which made the Raptors wonder whether Leonard was seriously considering them at all.

Leonard also asked the Raptors for Paul George, although a deal with Oklahoma City was never as close as some have reported and – despite those reports – Russell Westbrook was not included in the preliminary, and very brief, talks between the teams. In fact, those talks never even reached the team’s highest-ranking execs.

Leonard informed most his former Raptors teammates of his decision over text, including head coach Nick Nurse.

“I think we all knew that was a situation that could happen,” Nurse said in Vegas earlier this week.

“I don’t [think we could have done anything differently. When we first got him, there were a lot of questions thrown at me like, ‘What are you going to do to keep him?’ And we said we were going to take great care of him health-wise, which we did an unbelievable job of. We said we were going to have a great team and we did that as well. We knew we’d give him tremendous support from our fan base and we certainly did that.

“But I think you can’t blame a guy for wanting to go home. That’s what he texted me today. ‘I’m going home,’ you know. And I just said, ‘You’ve changed a lot of lives, man, by what you accomplished in Toronto. Mine especially.’ And thanked him for what he did and we’ll look to the future and look to do it again.”

Norman Powell – one of the few Raptors who had a pre-existing relationship with Leonard through their time in San Diego, where Leonard went to school and Powell grew up – also understood the decision

“I told him best of luck. I’ll definitely hit him up when I get to San Diego and we’ll work out a little bit this summer. I joked to him about guarding him and locking him up. It was a good conversation.”

So, the Raptors get set to turn the page. In many respects they already have. Although the signings haven’t been made official yet – they’re still working out some cap math – they’ve added four value wing players in former eighth-overall pick Stanley Johnson, defensive-minded 24-year-old Rondae Hollis-Jefferson, sharpshooter Matt Thomas – who had been playing in Europe – and undrafted guard Terence Davis.

The immediate fallout is the Raptors are no longer contenders, of course, but they’re also not extinct. As currently constructed, they’ll be competitive in the wide-open Eastern Conference. They’ll give the keys to budding star Pascal Siakam and see what they have in third-year forward OG Anunoby. They’ll see if Fred VanVleet can be a starter and hope to find a diamond in the rough with one of their recent signings.

As for veterans Kyle Lowry, Marc Gasol and Serge Ibaka – who are all on expiring deals – the Raptors have no intention of moving them, at least not before the season, according to sources. Like he did with previous Raptors teams, Ujiri will give this group an opportunity to sink or swim before choosing a path and deciding what comes next.

With those three – and VanVleet – hitting the open market next summer, the Raptors will have over $90 million coming off their books and plenty of flexibility with which to operate.​