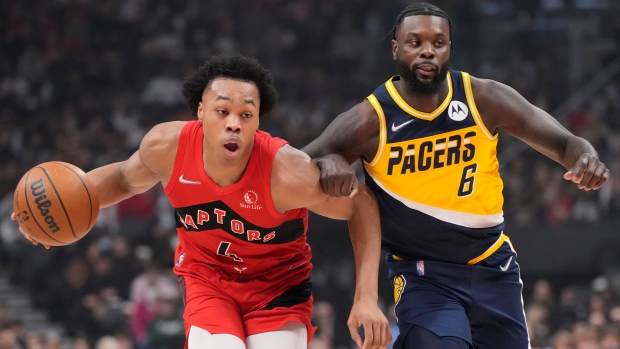 TORONTO – Just when you thought the Raptors’ season couldn’t get any stranger, the roof caught fire.

It was another unusual night for a team that’s had to endure more of them than it can count. On the court and in the standings, it couldn’t have gone much better, with their convincing 131-91 victory over the Pacers and Chicago’s win in Cleveland giving them sole possession of the sixth seed. However, the story was the roughly 70-minute delay that paused the proceedings in between.

Midway through the second quarter of Saturday’s game against Indiana, security personnel began to evacuate fans from a few sections behind the basket on the Bay Street side of Scotiabank Arena. Moments later, they were emptying neighbouring parts of the building, with emergency workers on site investigating what wound up being an electrical fire in a speaker above section 103.

“I looked up and that whole section was cleared out and I was trying to figure out why or what happened,” Raptors head coach Nick Nurse said afterwards. “I was like, geez, I wonder why they didn’t sell those seats. Then I was like, wait, there’s got to be a big group coming later, right? I didn’t know.”

“I started sneezing and that’s when I was like, ‘there’s something in the air,’” Precious Achiuwa said. “That’s when I heard about the fire.”

With around four minutes to go until halftime and the Raptors leading 66-38, an announcement was made. Per the instruction of Toronto Fire Services, the entire arena was being evacuated and the game would be suspended. Although they believed there was no immediate threat to public safety, there was enough concern over the smell emanating from the speaker to make the call out of an abundance of caution. There were no reported injuries, according to Toronto Police Operations, and fans that had tickets to the game will be issued full refunds.

Players from both teams spent the next hour or so in their respective locker rooms. Some of them stretched and got treatment, while others watched film or the Nets-Heat game to remain focused on basketball. Achiuwa went through his entire pre-game routine again and newly signed guard Armoni Brooks listened to music in an effort to stay locked in.

“I don’t think I’ve been in any game like that in my whole life,” Achiuwa said. “It was crazy.”

All the while, they had a live arena feed on to stay updated on the action. Team president Masai Ujiri and general manager Bobby Webster stood on the court and watched as the firefighters worked to determine whether play could be resumed or if it would have to be picked up at a later date. At one point, two of them hung from the rafters taking what appeared to be a large fire extinguisher to the speaker.

Once the fire was under control and the smell dissipated, they cleaned the floor, got the players back out for an abbreviated warm-up, and picked up where they left off, but without fans in attendance.

According to Achiuwa, a few Pacers’ players commented on how bizarre it was to play in an empty arena, something most of them wouldn’t have experienced since the 2019-20 season was restarted in the Orlando bubble. The Raptors were used it.

As disruptive as a global pandemic has been to each of the NBA’s 30 teams, to some degree or another, no club has been affected quite as much as the Raptors. One year after being forced to play all of their home games in Tampa – some in an empty arena and others in front of indifferent fans – they’re the only team in the league that’s had to deal with attendance restrictions this season.

They’ve played in front of half-capacity crowds. They’ve played games without fans in the building at all. They had three games postponed in December after a team-wide COVID outbreak hit in December. They played a game in Cleveland in which half of the team’s eight-man active roster met the other half on the bus ride over.

“Just add it to the list,” Nurse said with a laugh. “Another weird night.”

This was a new one, although Nurse made sure to mention the “several” rain delays he experienced during his years in the British Basketball League. Apparently they hadn’t seen everything, not yet anyway, but they seemed ready to roll with the punches once again.

The thing is, when you’ve had to play through the things that this team has, you’re not easily fazed. The Raptors had a 10-4 record at Scotiabank Arena while the attendance restrictions were in place earlier this year. So, it was hardly surprising to see them pick up where they left off once play resumed on Saturday, even after the lengthy break.

With Fred VanVleet dealing with a nagging knee injury, the team decided it best to hold him out for precautionary reasons following the delay. The Raptors kept on rolling, though. After playing out the final four minutes of the first half, and then pausing again for a shortened seven-minute halftime, they outscored Indiana 57-45 over the final two quarters, en route to the dominant 40-point win.

Pascal Siakam and OG Anunoby got hot early, scoring 11 first-quarter points apiece and outscoring the Pacers 22-21 by themselves. While Achiuwa cooled down after the delay, he hit his first four three-pointers in the opening half and finished with 18 points, leading the way for Toronto’s bench, which combined to score 62 points on the night.

It was their eighth win in the last 10 games, as they continue to climb the very tight Eastern Conference standings. With Thursday’s big victory over Cleveland, they moved into a virtual tie with the sliding Cavaliers. And while the Cavs own the tiebreaker with Toronto, they’ve now dropped 12 of their last 18 contests and have fallen out of the sixth and final guaranteed playoff spot. It now belongs to the Raptors, and nothing – including the most unusual of external forces – can seem to slow them down.