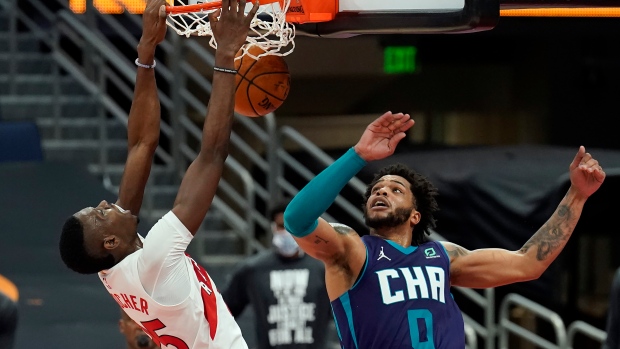 TAMPA, Fla. — Chris Boucher had 25 points and 10 rebounds, Kyle Lowry had 16 points and 12 assists, and the Toronto Raptors beat the Charlotte Hornets 111-108 on Thursday night.

Pascal Siakam added 15 points and seven rebounds as Toronto ended a two-game skid and improved to 3-8.

Terry Rozier led the Hornets with 22 points and P.J. Washington had 20 points and 11 rebounds. LaMelo Ball had 14 points and 11 assists as Charlotte played without leading scorer Gordon Heyward, who strained his left hip in Wednesday night's 104-93 loss to Dallas that ended a four-game winning streak.

Fred Van Fleet's 3-pointer with 1:52 left in the first quarter launched a 34-11 Toronto run over the next 8 1/2 minutes that put the Raptors ahead to stay.

They led 71-62 at halftime after shooting 13 for 25 (52%) from behind the arc. Boucher had 16 points in the first half, including a layup that left the Raptors with a 15-point lead, their largest of the half.

After Toronto missed its first seven shots of the fourth quarter, Charlotte closed the gap to three. Miles Bridges missed an open 3-point shot and Boucher's dunk at the other end put the Raptors up 111-106 with 58.5 seconds left.

Washington missed another 3-pointer that could have tied it in the closing seconds.

Hornets: Heyward, who had started Charlotte's first 12 games and averaged 22.0 points, might be available Saturday night, according to coach James Borrego.

Hornets: Will stay in Tampa and play the Raptors in a rematch Saturday night.

Raptors: Play the Hornets on Saturday in the second of five straight “home” games.