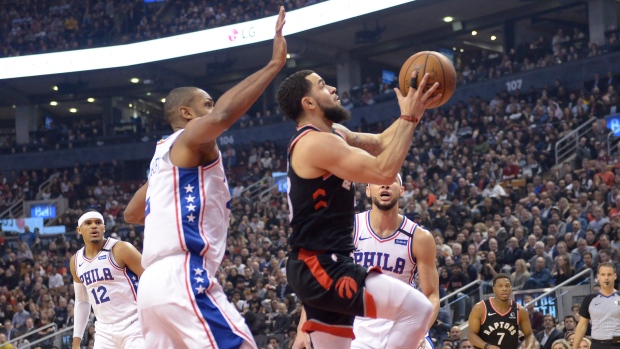 TORONTO – January seems a bit early for scoreboard watching, but the Toronto Raptors and Philadelphia 76ers aren’t ashamed to admit they’ve been keeping an eye on each other, along with the other teams around them in a highly competitive race atop the Eastern Conference.

It’s actually refreshing to hear two of the NBA’s most candid coaches acknowledge something that many others tend to downplay.

“I do pay attention,” said Sixers head coach Brett Brown. “I wish I could look at you and say that I don’t but I do. I pay attention, as I should when it’s that tight and you’re mindful of home-court advantages and splits and all those things.”

“I think we watch the standings all year long – the top-six [teams in the East], even the bottom [of the standings],” Raptors coach Nick Nurse said. “[We] try to watch them, [see] what teams are [doing in] their last 10 [games], what [their record is] at home, what [it is] on the road. I don’t know if there’s nothing better to do but we do it all the time.”

These two teams have faced off 10 times over the last nine months and, as you can imagine, they know each other well. In another hotly contested battle between the division rivals, the Toronto came away with a 107-95 win over Philadelphia at home on Wednesday.

It was one of those important, character-building type of victories, even this early in the season. The Raptors came in with a 2-7 record against the East’s top-six teams and while injuries certainly factored into some of those losses, they were 0-4 versus that group with their full rotation intact.

They didn’t get off to an encouraging start, either. Sluggish and uncharacteristically out-of-sync defensively, they fell behind by as many as 14 points in the first quarter.

Perhaps their recent schedule – loaded with inferior opponents – had lulled them to sleep. Maybe it’s just that time of the year, as Nurse and a few of Toronto’s players suggested after the game. Still, in a game of this magnitude – against a familiar foe and televised nationally in the States on ESPN – their effort and energy level was disappointing.

The Sixers were playing without all-star big man Joel Embiid, who’s recovering from hand surgery, and lost a second starter in Josh Richardson when he hurt his hamstring in the first quarter. They’ve been playing well of late, though – winners of four straight coming into the game – and were in control for most of the night. They led for all but five and a half minutes of the first three quarters before the Raptors flipped the switch and pulled away in the fourth.

Toronto ended the third on a 10-0 run, fuelled by the energy of Serge Ibaka and a pair of three-pointers from Fred VanVleet, and then outscored Philly 31-23 in the final frame to steal their fifth straight win. VanVleet had nine of his 22 points in the fourth, and 15 if you include the last 90 seconds of the third. The red-hot Norman Powell had 11 of his 18 points over the final 12 minutes.

“I think we’re going through some mid-season [malaise] just a bit,” Nurse said. “We seem to be a half-step or a half-second slow at the start of a couple of games here lately. I thought they had like five totally uncontested threes in the first four minutes of the game, but we did it when it mattered. We were moving and flying, playing physical most of the second half, I thought. So, [we’ve] just got to play through some of that stuff once in a while, I’m just really proud that they dug in and played defence, gave themselves a chance.”

With the win, Toronto took a 2-1 lead in the season series with the Sixers and will have a chance to secure the tiebreaker in the final meeting on March 16 in Philadelphia, which isn’t insignificant given how tight things are in the standings.

Together, Toronto and Philly make up 40 per cent of the five-team logjam behind first-place Milwaukee in the East. While the Bucks have pulled away – holding a commanding 7.5 game lead at the top of the conference – just 2.5 games separate the second and sixth seeds.

Since starting 24-8, Miami has gone 7-5 and is barely clinging onto a one-game cushion over Toronto for the coveted second seed. All five of the Heat’s recent losses have come against teams with sub-.500 records – Washington, Orlando, Brooklyn, New York and San Antonio – and they needed overtime to beat the Kings and Wizards in each of their last two contests.

The Celtics dropped six of eight games before pulling out an impressive victory over the Lakers and beating Memphis on Wednesday. They’ve fallen to fourth but are just a half game behind the Raptors, with the Pacers and Sixers trailing them.

If the season ended today, it would be Raptors-Sixers in the opening round of the playoffs. If either team needed a reminder of how crucial home-court advantage can be, look no further than their thrilling seven-game second-round series from last spring, and the friendly bounce – or, four bounces, as it were – that Kawhi Leonard got on the Toronto rims. Also consider the Sixers’ 20-2 record in Philadelphia, compared to their 9-15 record on the road this season.

Securing home-court advantage in the first round is crucial for each of those five teams, but two of them are going to start the playoffs on the road. The real prize would be coming in second and avoiding that group of teams in the opening round altogether.

A win like the Raptors were able to take from Philadelphia on Wednesday is one more step towards finishing at the top of that heap. If nothing else, it helps prepare them for what’s to come.

“There’s usually more talent on the floor, size, intensity in these games,” Nurse said before the victory. “And that’s taking nothing away from the other ones because those are damn hard to win going through the course of a season, as we know. They really are. It’s like you look down and say ‘oh, we’re not playing [a winning team]’ but those end up being dogfights anyway. Everybody goes through that. But I think on the evaluation side of things I think it does probably take on a bit more significance.”