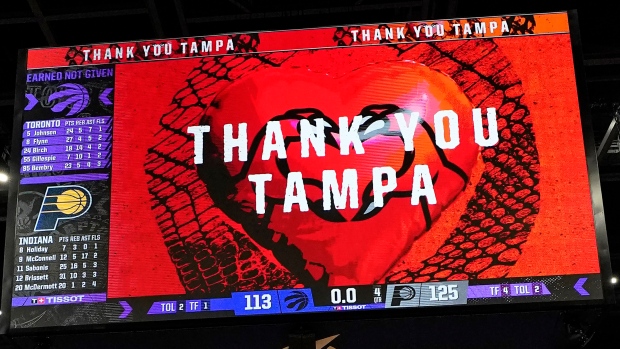 TORONTO – It’s been more than 14 months since the Toronto Raptors played a game in Toronto.

If there was ever any doubt that absence makes the heart grow fonder, consider what the team is missing about the city and country it calls home.

Fred VanVleet says he misses Canadian grocery stores. Nick Nurse yearns for “the snow, the wind and the cold.” Kyle Lowry told USA Today that he’s missed driving on the Gardiner Expressway and the DVP (Don Valley Parkway). You didn’t misread. They even miss the traffic and winter weather.

As they’ve learned this season, the grass isn’t always greener, even if the grass in their temporary home is literally greener.

The Raptors tried to make the best of their time in Tampa. They invested considerable resources to build a makeshift practice facility inside the ballroom of a downtown hotel. They helped players and staff, and their families, find places to live and get settled. They embraced the community as much as possible under the circumstances of a global pandemic. But it never felt like home.

“It’s been rough,” said Montreal native Chris Boucher. “They did everything for us, the set up and everything was great, but it ain’t Toronto.”

“I mean, listen, I know this has become a thing,” VanVleet said. “Tampa was great. I don’t wanna sit up here and make it sound like I’m s***ing on Tampa, but it’s just not Toronto. It’s not where we’re supposed to be.”

With border restrictions in place last fall, the Raptors considered multiple American cities as potential hosts for the 2020-21 season, including Newark, N.J., and Nashville, Tenn., among others.

They had hoped the federal and provincial governments would grant them an exception allowing the team and the NBA’s 29 other clubs to travel back and forth, bypass quarantine guidelines, and play games in Toronto. It was always a long shot and when their request was officially denied in November, less than two weeks before the start of training camp, they began the process of relocating to Tampa – a popular choice amongst the players because of its warm weather and absence of state income tax.

Given everything else that went wrong, it’s impossible to quantify how big a role the move played in their disappointing season, which saw them miss the playoffs for the first time in eight years. However, as the only team in the league that had to play its home games more than 2,000 kilometres away from home, there’s no denying that it was a significant disadvantage.

“At the end you really realize how much we lost not being in Toronto this year,” Stanley Johnson said last week. “Truly playing road games all year long, truly not being in your own house, truly not having your own practice facility, it wasn’t giving us the best foot forward.”

The quick turnaround ahead of camp made it even more challenging. Players and staff stayed at the team hotel until they found temporary homes in or around the city. With Tampa hosting the Super Bowl in January, it wasn’t as easy as they had hoped. In some cases, it took months to get settled. When Amalie Arena started permitting a limited number of fans to attend games, the team was able to recoup some of its costs, but many of those fans were there to root for the opposition.

Although players were eager to hop on a plane and bid farewell to Florida when the season came to an end on Sunday afternoon, and many of them haven’t spoken highly of their Tampa experience, there’s obviously some results-based thinking at play. If the Raptors had overcome the adversity, as they’ve done so many times before and fully expected to again, then Tampa would probably look a lot different. Instead, it’s the place they’re naturally going to associate with a frustrating campaign.

Their Toronto homecoming will have to wait at least a little while longer, though. The organization will continue to use Tampa as a home base for most of the off-season. Makes sense considering they’re already set up there and can host pre-draft workouts, with prospects making regular trips in and out. Assuming Summer League is a go this year, they’ll spend the bulk of August in Las Vegas.

The question is, what happens after that? It’s still unclear whether the Raptors will be able to open next season in Toronto, though the organization remains optimistic.

Getting the green light is dependent on a number of factors, most notably how quickly Ontario’s vaccine rollout curbs the case count in the province. The Raptors will also be keeping a close eye on developing situations with the Blue Jays and Toronto FC to see if they’re cleared to play games north of the border at some point this summer.

It’s hard to project what things will look like in a month from now, let alone when the 2021-22 NBA season tips off next fall. They’ll need an answer from the government well before that. According to multiple sources, the league is unlikely to allow the Raptors to wait as long as they did last year. There’s no official deadline date in place, but it’s believed the team will need to know where its playing at least the first half of its home games by early August.

Tampa is the fallback. If it comes to that, the transition would almost certainly be smoother the second time around. Selling players on it again may be tougher, though. But that’s an absolute last resort. Even if they have to play in an empty Scotiabank Arena, as opposed to the possibility of hosting full capacity crowds in Florida, the Raptors preference is clear, and it’s a strong preference.

“You want to feel comfortable, you want to feel at home and Toronto's that for us,” Pascal Siakam said. “So I think that we’re definitely looking forward to that. Then again, there’s a lot of things that we can’t control, but obviously our hope is definitely to be there [next season].”