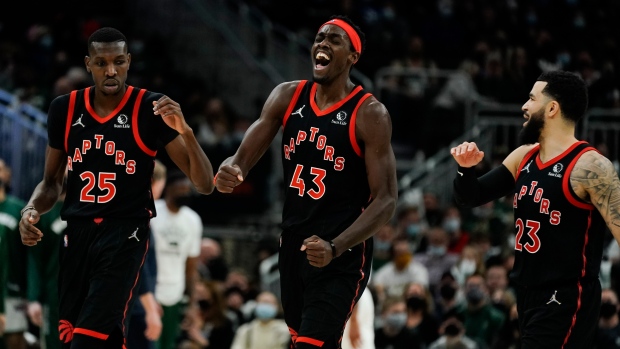 TORONTO – It’s never too early to start looking at the standings, especially in the bunched up Eastern Conference.

With six teams pulling away at the top (Miami, Chicago, Brooklyn, Milwaukee, Cleveland and Philadelphia) and a few falling out of it at the bottom (Indiana, Detroit and Orlando), the room for error in the murky middle is razor thin.

Only four games separate the six teams between seventh and 12th place. There’s still plenty of time for one or two of those clubs to get hot and make a run at a guaranteed playoff berth, or to fall out of postseason contention altogether. For now, though, it looks like these six teams could be vying for four spots in the East’s play-in tournament come the spring. In order of current standing, it’s Charlotte, Boston, Toronto, Washington, New York and Atlanta. How they fare against each other should go a long way in determining who comes out of that group.

“It’s fun being in this mix,” Raptors head coach Nick Nurse said, moments before his team took on the seventh-seeded Hornets Tuesday night. “I think it’s important. You’re gonna have to do the work against the people right around you. If you’re seeing ‘em head to head, you can’t just sit around all night hoping they lose when you’re watching the scores of other games. When you’ve got a chance to take ‘em out yourselves, you’re gonna have to do that more times than not.”

It’s hard to know what to expect from the Raptors on a nightly basis. They’ll win games they seemingly have no business winning and lose games they’ve got no business losing, often playing up or down to the level of competition – the pitfalls of a young team. Over the last few weeks alone, they’ve gone toe-to-toe with some of the league’s best – beating the reigning champion Bucks and suffering hard-fought losses to Phoenix, Miami and Dallas – while also getting embarrassed by the likes of the Pistons and Blazers, a couple of sub-.500 teams missing their best player.

However, if you’re measuring them up against the teams in their tier, there’s cause for encouragement. With Tuesday’s win over Charlotte, the Raptors improved to 8-3 when facing the other five teams in that East logjam this season.

It was another unlikely victory, coming without three key rotation players. The Raptors were missing their starting point guard, Fred VanVleet, who was out due to knee soreness, and rookie Scottie Barnes, who, along with Pascal Siakam, had been handling the backup point guard duties. Barnes was a late scratch with swelling in his wrist, while Khem Birch remained out following nose surgery.

Even without a starter of their own, the injured Gordon Hayward, the Hornets came to Toronto having won seven of nine games, led by dynamic sophomore guard LaMelo Ball and emerging two-way star Miles Bridges.

But the Raptors rose to the occasion. After being held to just 15 points on 19 per cent shooting in the first quarter of Sunday’s 114-105 loss to Portland a couple days earlier, they scored 39 on 62 per cent over the opening 12 minutes against Charlotte. They had 76 points through two quarters, the most they’ve scored in a half this season, and won handily, 125-113.

Without VanVleet, Nurse opted against starting a traditional point guard, putting the ball in Siakam’s hands instead, and he didn’t disappoint. The versatile forward looked like a natural initiating the offence. He was patient, but controlled the pace of play. He made great reads out of the post and used his trademark spin move to generate good looks for himself and his teammates.

“I think he really seems to have a good tempo to where he’s going,” Nurse said of Siakam, who scored 24 points, matched a career-high with 12 assists and finished one rebound shy of a triple-double. “He’s really composed. I think the spin moves are very under control… I think he’s creating some pretty good offence for us.”

The Raptors got 32 points from Gary Trent Jr. and 24 from OG Anunoby, and the unexpected contributions of a couple forgotten reserve point guards, Dalano Banton and Malachi Flynn – who combined for 21 points and six assists off the bench – helped mask the lack of depth that’s plagued them in recent weeks.

Once again, president Masai Ujiri and general manager Bobby Webster watched from their seats in the middle of a fan-less Scotiabank Arena, evaluating where this team is at and what it needs with the February 10 trade deadline looming. Their goal for the duration of this season is crystalizing.

While they scoffed at the notion of chasing a play-in spot a year ago, deciding to play out their lost season in Tampa and chase lottery balls instead – which ultimately landed them Barnes as the fourth-overall pick – they’re of a different mindset this time around. This is a developing team, but one that wants to compete and continue putting its young players in high leverage situations to learn and grow.

“It really is valuable,” Nurse said. “The playoff [are] different and the experience that you gain there is, you can't gain it anywhere else. It's invaluable. Just from the intensity, the physicality, the game planning, the adjustments of going through it, you can't place a value on what it means for guys to go through it.”

For better or for worse, Nurse and the Raptors have been pulling out all the stops to squeak out as many wins as they can, understanding each one could end up being the difference in a very tight race.

On most nights, that’s meant leaving heavily on their best players. Prior to missing Tuesday’s contest, VanVleet had logged at least 39 minutes in eight straight games, joining Damian Lillard as the only NBA players to do that over the past five seasons. Just 37 games into his NBA career, Barnes has already logged more than twice as many minutes as he played at Florida State all of last season, and is averaging more minutes than any rookie since Andrew Wiggins in 2014-15. Both players will accompany the team on its upcoming road trip, but Nurse couldn’t say how much time they would miss.

They’ve got a crucial stretch coming up, with four of their next seven games coming against the two teams at the top of the conference, Chicago and Miami, and the other three coming against a couple clubs in that middle tier, Atlanta and Charlotte.

It’s hard to see any of those six teams in the middle of the East taking their foot off the gas. Like the Raptors, they should all be incentivized to push towards a playoff berth.

At 21-25, the 12th-place Hawks are currently looking up at the rest of that group, though they arguably feature its best player in Trae Young. They came into the season with lofty aspirations, having made the Conference Finals last year, and while they’ve underachieved, they’re finally starting to get hot, winning four straight games, including victories over Milwaukee, Miami and Charlotte.

The 11th-place Knicks (23-25) are also feeling the pressure to build off last season’s success, while the Wizards (23-25) – who coughed up a 35-point lead in a humiliating loss to the Clippers on Tuesday – are trying to appease Bradley Beal and sell him on signing a contract extension over the summer.

The Celtics (25-24) just got 87 points from Jayson Tatum over a two-game stretch in which they defeated Washington by 29 points and Sacramento by 53.

Having already secured the season series and tiebreaker with Washington and New York, and with seven games left to play against that group of six teams, the Raptors know how important it is to take care of business.

“We are all right there,” Siakam said. “You go in a little slump and that can be the end of the season for you. So every night it is a battle and we’ve got to be conscious of that and just go into these games knowing that they're real important and we've got to give our all.”