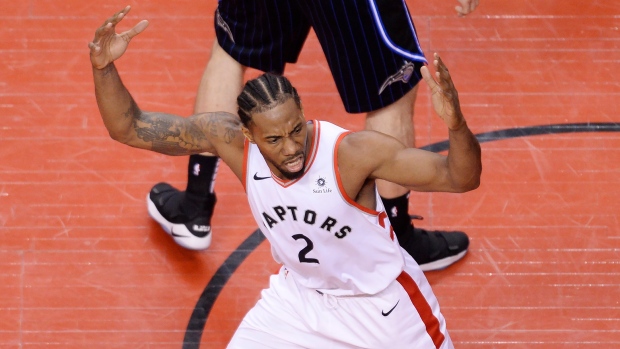 The Toronto Raptors hope to continue the dominance they showed in Game 2 when they visit the Orlando Magic for Game 3 of the first-round playoff series Friday night.

The Magic hope they can find a way to get more production from center Nikola Vucevic, who has been stifled by Toronto's defence.

Despite their 111-82 second-game dominance Tuesday and their ability to limit Vucevic, the best the Raptors could do in the first two games of the best-of-seven series is gain a split at home.

"I'm just disappointed the way we played offensively, but I'm not concerned," said Magic guard/forward Evan Fournier, who scored 10 points and had five assists Tuesday. "We played poorly (Tuesday). Now we're going to Orlando and it's not a bad position to be in. It just feels bad ... because we played poorly."

The combination of Marc Gasol and Serge Ibaka has frustrated Vucevic through the first two games.

"We've got two really good centers defensively, first of all," Raptors coach Nick Nurse said Wednesday. "They are, at times, as good as it gets, so it's nice to have two guys to be able to go at him throughout the course of the game. They played him physical. They limited his touches."

Vucevic is a combined 6-for-21 from the field after two games, averaging 8.5 points per game.

"It's just that they doubled-teamed me early, and it was hard for me to create anything," said Vucevic, who scored six points Tuesday. "They did a good job taking away a lot of the stuff, a lot of my strengths, and I just have to figure it out, a way to be more aggressive, be more efficient offensively. I didn't take many shots either (Tuesday), so I just have to find a way to get going offensively."

"My experience in series is like this: The best players -- and I believe (Vucevic) has been our best player all year, he's a very, very good player -- there are just certain things they figure out as the series goes on," Magic coach Steve Clifford said. "Sometimes there are things you can do to help him and sometimes they have to figure it out. He's a bright guy and he's a very good player and I think he'll figure this out. But there have to be some adjustments, me again helping him, and then he's going to have to find a way to get easy ones whether it's running the floor more, being more active on the offensive glass, duck-ins, whatever it is, so he can get the ball deeper."

Toronto's Kawhi Leonard led all scorers with 37 points, shooting 15 for 22 from the field that included 4 for 8 from 3-point range. It was his eighth career game in the postseason with at least 30 points. Leonard made a playoff career-best 15 field goals on Tuesday. His career-best for points in a postseason game is 43.

Nurse appreciated Leonard for more than his scoring.

"Obviously, the offence is sticking out with the 37 (points) but much a more locked-in defensive approach," Nurse said. "I think it was a team-wide thing defensively, so he was a big part of that. I think about every guy that hit the floor was more locked in as a team defence (Tuesday)."