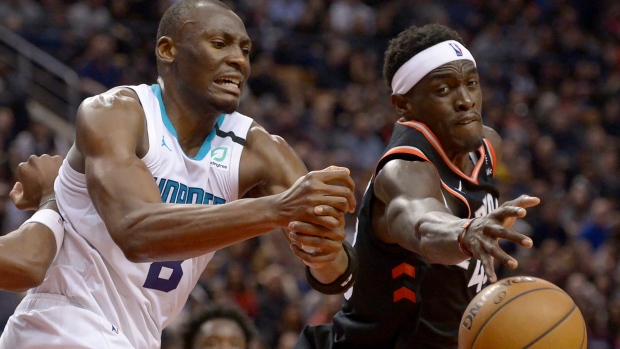 TORONTO – Off nights happen, bad games happen, but they can be tough to justify when you’re the defending champions and one of the best teams in the NBA.

“Well that was one for the books,” Toronto Raptors head coach Nick Nurse said, in jest, following his team’s 99-96 loss to the lowly Charlotte Hornets on Friday – arguably their worst defeat of an otherwise remarkable season.

It sure was ugly. The Raptors led for less than 10 minutes on the night and trailed by as many as 17 points. They bricked threes, clanked layups, committed some silly fouls and had a few uncharacteristic defensive lapses. Yet somehow, they still had a chance to win.

With eight seconds left, after Kyle Lowry had scored Toronto’s final 10 points to tie the game, Norman Powell – who returned to action after missing the past month with a fractured finger – missed a good look from three-point range. Lowry grabbed a long offensive rebound and missed what was probably a rushed shot from the corner, giving the ball back to Charlotte with a chance to win it in regulation.

However, before the Hornets could even inbound, Rondae Hollis-Jefferson was whistled for a foul for colliding with Terry Rozier, who was coming to the ball. Hollis-Jefferson fouled out and Charlotte was awarded a free throw and possession, in what turned out to be the deciding play.

It was close, and not a call you generally see officials make that late in a tight game, but it was a foul. That’s not why the Raptors lost.

Of course, they were undermanned and undersized, but that’s also not why they lost.

But injuries haven’t been an excuse for the Raptors all season, and they shouldn’t have been on Friday.

Toronto entered the game as 13.5-point favourites at home over a Charlotte team that was 20-38 on the season, and just 2-20 against clubs with winning records. After winning 17 of 18 games, the Raptors were coming off a tough loss in a hard-fought contest against the league-best Milwaukee Bucks and are about to head out on a tricky five-game Western Conference road trip. They shouldn’t have been lacking for motivation. Even without three of their top-seven players, they were getting Powell and Patrick McCaw back, and they’ve got one of the deepest rosters in the association.

They had everything they needed to win. They just didn’t play well or hard enough to win.

“Obviously, we didn't make shots,” said Pascal Siakam, who had a team-high 24 points but shot 9-for-23 from the field, 1-for-5 from three and 5-for-9 from the free throw line. “We were missing everything – layups, free throws, I mean, the list goes on. Threes.”

“We had great looks,” Lowry said. “For two games in a row we’ve had trouble shooting. We’ve gotta be a little bit better offensively, but I think we got great shots but we missed a lot. That was the game, we missed a lot of shots. That’s it.”

For the second game in a row, the Raptors were held under 100 points and shot under 36 per cent. It wasn’t especially surprising to see their offence labouring in that 108-97 loss to the Bucks and their top-ranked defence on Tuesday. But against the 26th-ranked Hornets defence? That seemed like more of an anomaly.

In the 18 contests prior to the Bucks game, Toronto averaged 119.7 points on 50 per cent shooting from the field and 40 per cent from three-point range.

Outside of Powell, who went 4-for-11 from long distance, the team shot 6-for-32 against Charlotte. The bench went 0-for-9 and scored just nine points on the night. While Siakam got it going in the third quarter, scoring 14 of his 24 points, and Lowry nearly led his club to an unlikely win in the fourth, it was too late.

With the Celtics on their tail – they’re now within a half game of second place in the East – this is a game the Raptors could regret letting slip away, especially with the schedule getting more difficult. Their five-game road trip begins with a trip to Denver, where they’ll face the 40-18 Nuggets and the prospect of dropping three games in a row for the first time since December and only the second time this season.

While there’s probably a few things they can take from the game against Milwaukee – an instructive loss – they’re best to just flush Friday’s debacle and turn the page. Perhaps this a good time to be heading on the road.

“You don’t ever want to lose, but we’ve gotta learn from it,” Lowry said. “We’ve got a big trip coming up to get back to being the team that we’ve been together. It’s a great chance for us to get out there, be on the road and take it day-by-day, game-by-game.”

The good news is that all three injured players will be travelling with the team and, according to Nurse, the Raptors are expecting Ibaka and VanVleet back from their knee and shoulder ailments at some point on this trip.​