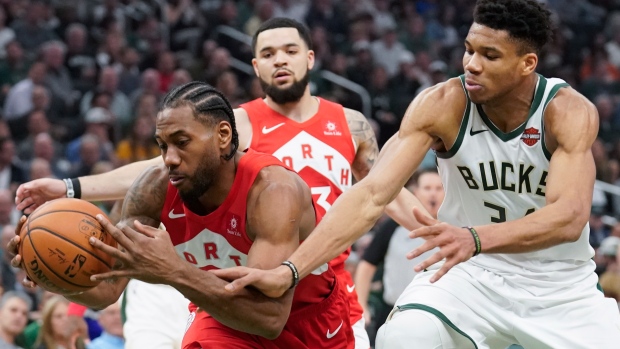 MILWAUKEE – For the first time in the franchise’s 24-year history, the Toronto Raptors are one win away from the NBA Finals.

How did they get here?

When they were last on the Fiserv Forum court in Milwaukee things were bleak. After turning in an uninspiring Game 2 performance, losing by 22 points, they found themselves down 2-0 in their Eastern Conference Finals series to the league’s best team.

In NBA history, only seven per cent of the teams to lose the first two games of a series have come back to advance. Now, as unlikely as it seemed almost a week earlier, the Raptors can become one of those teams.

With three straight wins over the Bucks, each of them uniquely impressive, Toronto will have a chance to close out the series in Saturday’s Game 6, reach their stated goal of making it to the Finals, and play the Golden State Warriors for a championship.

Of course, the Raptors did what they were supposed to do – winning both of their games at home like the Bucks had done last week. As the old saying goes, a series doesn’t really begin until the road team wins.

They had been there before – tied 2-2 in the third round after taking Games 3 and 4 at home. It was against Cleveland in 2016. Then things went south in a hurry. The Cavs won Game 5 by 38 points on their home court. Then, a 26-point victory in Game 6 ended it. Afterwards, the sense from players on both teams was that the Cavs might not have taken Toronto seriously in the two games they lost.

So, how would they come out in Milwaukee?

Nearly five minutes into Game 5, the Raptors were trailing 18-4 and it looked like history was primed to repeat itself. Instead, they fought back.

“That was a test on the road,” head coach Nick Nurse said. “As much as you want to try to prepare them for the speed of the game at the start, sometimes it's just so much energy in the building that you're going to have to withstand some of that, and I thought we did a really good job of climbing back.”

Their defence, which has been excellent for most of the postseason, locked in during the second quarter, holding Milwaukee to 17 points on 6-of-22 shooting.

Their offence wasn’t pretty, which has also been an ongoing theme throughout the playoffs, but they hung around until the fourth quarter when Kawhi Leonard took over. The superstar forward scored 15 of his game-high 35 points in the final frame, as Toronto pulled away in the last few minutes.

“He’s a God,” an anonymous Raptors staffer said of Leonard after the team took its 3-2 series lead with a 105-99 win on Thursday.

Leonard’s experience showed in Game 5, as it has for most of the series. This is his fifth career trip to the Conference Finals. For Milwaukee’s superstar Giannis Antetokounmpo and most of the Bucks core, this is uncharted territory. They’ve never been this deep into the playoffs before. They also haven’t faced much adversity this year. They were mostly healthy, up until late in the season, and only lost consecutive games once going into this series.

“Experience helps a lot,” Leonard said. “You know, just from my input, I've been here before. I've been to The Finals, and it's pretty much nothing new that I'm seeing out there. You've just got to have fun with it and enjoy it. Like I told them tonight, we were down 10, I told them to enjoy the moment and embrace it, and let's have fun and love it. This is why we're here.”

From the moment training camp opened in the fall, the Raptors were running into roadblocks. The addition of Leonard meant the team finally had its superstar, but was he healthy and did he want to play in Toronto? Lowry came to camp less than thrilled about the trade of his best friend, DeMar DeRozan. Long-time starters had to be sold on new roles coming off the bench. They had to overcome injuries and build chemistry on the fly thanks to Leonard’s load management nights and a big mid-season trade.

“We never put our heads down,” Lowry said. “We never thought it would be easy. We still don't think it's going to be easy. We understood, like listen; this is the Eastern Conference Finals. It's never going to be easy. It's going to be tough. And you've got a team down there that's really, really talented, really, really good. But we just go out there and play our game. You've got an opportunity to make adjustments on the fly, one day to kind of adjust, to prepare, to recover, and it's been crazy gruelling, but it's been a fun process. It's been a fun process.”

They were tested with their season on the line in a seven-game series against Philadelphia and then again here versus Milwaukee. As unexpected as this turnaround might seem, perhaps it shouldn’t be so surprising. The Raptors have faced adversity all season and they’ve had to rise above it.

In a series that started with a missed opportunity – the fourth-quarter collapse that cost them a very winnable Game 1 – the Raptors have seized the moment.

“I think that being tied up 2-2, to have a great opportunity to come in here and try to steal one was on our minds,” said Fred VanVleet, who arrived in Milwaukee Thursday afternoon after spending the night at home in Rockford, Illinois with his newborn son. Since the birth of his second child, Fred Jr., VanVleet has scored 34 points in two games (including a playoff career-high 21 in Game 5) – more than he had in his previous 11 games combined.

“Obviously being one win away going home, you just want to take advantage of the opportunity. It would be a very, very long summer thinking about what could have been or what you could have done, and so we've just got to go out there and have no regrets, and I think we did a great job of that [Thursday night] laying it all on the line, staying locked in, weathering those runs and being able to bounce back. One win away from the Finals sounds pretty good to me. I'll take those chances, and we've got to go out there and try to take advantage of the opportunity.”