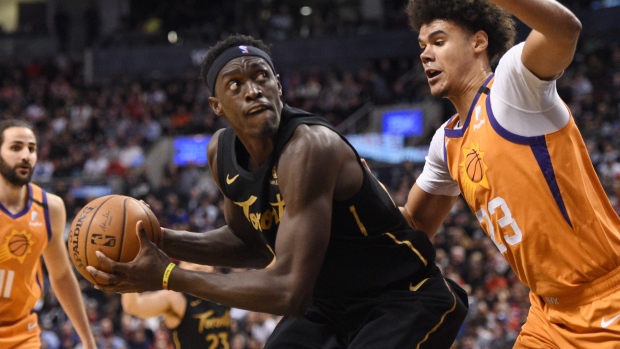 He had other options, of course. He had an entire roster of good options – team captain and reigning league MVP Giannis Antetokounmpo, human battering ram Joel Embiid, sophomore inferno Trae Young, the red-hot Kemba Walker, just to name a few.

We’re talking about the best players in basketball and, thanks in large part to the well-executed format change and a rousing tribute to the late Kobe Bryant earlier in the evening, it was the most spirited mid-season showcase in recent memory.

“I don’t know if that’s how good [Siakam] is or if it’s because Nurse [was] the coach,” joked Raptors guard Fred VanVleet, who was watching from Turks and Caicos. “But I was laughing at him and Kyle [Lowry] trying to close it out out there.”

That Siakam was matched up with James Harden, who isn’t exactly known for his defensive prowess, probably made the decision a bit easier, but make no mistake, Nurse – head coach of Team Giannis – had his day job in mind.

Nurse’s second-place Raptors have had a remarkable campaign. On Friday, they opened the unofficial second half of the season with a 118-101 win over Phoenix to improve to 41-15. Siakam led all scorers with 37 points, including 25 in the first half and another eight in the fourth quarter to help put the game away.

Siakam, last year’s Most Improved Player, has taken another big step after inheriting the featured role from Kawhi Leonard this past summer. There have been growing pains along the way, as you would expect, but he hasn’t looked out of place in the spotlight.

It’s been far from a one-man show, however. Toronto is a deep and well-balanced team, which has helped them survive countless injuries to key contributors, including Siakam. Once the playoffs roll around, though, they’ll ask for more from their best player. As the level of competition rises and the games become more crucial, teams generally tighten their rotation and lean on their go-to scorer, especially in crunch time.

Given the stage and the stakes, last Sunday’s All-Star Game was a good dress rehearsal. The results were mixed. As both teams raced to the target score of 157, Siakam drew a foul on Harden with his side down 154-152, splitting the free throws. With the opposition, Team LeBron, stuck on game point, Harden stripped Siakam at the rim, though you could argue he was fouled again (and both Nurse and Siakam have made that argument). Nurse, Siakam and Team Giannis would go on to lose the game, but it was a valuable experience for the 25-year-old first-time all-star.

“It was cool,” Siakam said. “[I wish] I made a few more shots. I mean you could argue fouls and stuff. But it was so fun. It was so fun just seeing that at the end of the game, with all those players, and it was like OK, we’re choosing the matchup and we wanna go at it and I was a part of that. It was great. I wish I had made the shots a little bit but it was a pretty cool moment.”

“It was excellent,” said Nurse. “That's the kind of situation we're going to need Pascal to be able to score in. High leverage. High talent. Being guarded hard. Being switched on, doubled on, tripled. Sometimes in the block. And I thought he held his own well. I thought if he would've gotten a little better whistle he really would've played well. I thought he made a couple great moves and got fouled on two of them and had nothing to show for them. They were solid moves with good rhythm and timing — and against really good players.”

With 26 contests and eight weeks to go before the playoffs begin, the Raptors will do what they can to find Siakam even more of those late-game reps and, according to Nurse, expand his overall role in the team’s offence.

The fourth-year forward played an important role in last season’s championship run, but with Leonard around he was the second option on the floor in those critical moments, at best. Now there’s nowhere to hide. He’s the guy for Toronto. Other teams know that and, come playoff time, they’ll do everything they can to try and stop him. One of the Raptors’ top priorities over the next couple months will be to get him ready for what’s to come.

“I think in general we want to continue to give him as many reps as possible in a lot of different scenarios,” Nurse said. “So, I guess his teammates are going to have to be accepting of that. We're going to probably be more high volume on purpose with him than maybe we would [be] if we were just letting the game flow out or playing to the rhythm of the game or playing to matchups or whatever. So, I just think we need to continue to polish his reps at bringing it up, facing double-teams in the post, certain scoring plays, situations, things like that.”

Coming into Friday’s game, Siakam had a 34 per cent usage rate in crunch time situations (score within five points or fewer in the final five minutes of the fourth quarter or overtime) – just behind Leonard and LeBron James and ahead of Anthony Davis and Paul George, so it’s not like the offence hasn’t been running through him down the stretch already.

The issue is that Toronto hasn’t played many close games with Siakam in the lineup. The Raptors have logged 100 “clutch” minutes this season – 11th-fewest in the NBA – but 37 of them came during the 11-game stretch that Siakam missed with a groin injury between mid-December and early-January.

The ending of Friday’s win over Phoenix didn’t qualify as a “clutch” opportunity, thanks in large part to how well Siakam played early in the game. He was aggressive right out of the gate, bullying sophomore Mikal Bridges in the post, facing up in the mid-range, and drilling threes – he hit five of his first six shots from beyond the arc. The Suns did cut Toronto’s lead, which was as large as 26 points, to seven inside five minutes, but Siakam scored eight points and hit all four of his shots – each of them coming in the paint – over the final few minutes to help his team pull away.

The Raptors will happily blow teams out like they did for most of their 15-game winning streak, which just so happened to coincide with a friendly stretch of the schedule. Their remaining slate of games is more challenging, though. Theoretically, that should lead to tighter finishes.

Despite his inexperience in that role, he’s the type of player you feel good about trusting in that spot. He’s versatile enough to be unpredictable. He’s unselfish and savvy enough to make a play for his teammates, if the situation calls for it. He’s crafty enough to get to the rim or draw a foul, and he’s extended his range to the point where you’re comfortable with him taking a mid-range shot or a three.

There will almost certainly be a learning curve as he adjusts to the level of pressure and defensive attention he’ll see in April and May (and June, if Toronto is fortunate enough), but the young man rarely seems fazed by a new challenge, if ever. His game has already grown at an unprecedented rate, which is an encouraging sign for the Raptors, who will need him to take another big leap this spring.

“For myself, I expect to continue to get better,” Siakam said. “This is a new thing for me and I just continue to get excited about the process and knowing one day you might have 10 points and another you might have 30 and understanding what you need to do to keep it consistent where you have that high level of play every single game.”

“When you see us play out there it doesn’t matter who is making shots, who is making plays, we just trust the person that’s playing well at that time. But when it comes down to it I think we all know as a team who’s that person we want to go to when we need something easy or if we need a little relief. I think everybody knows that and I know that, and I’m glad to be that guy.”​