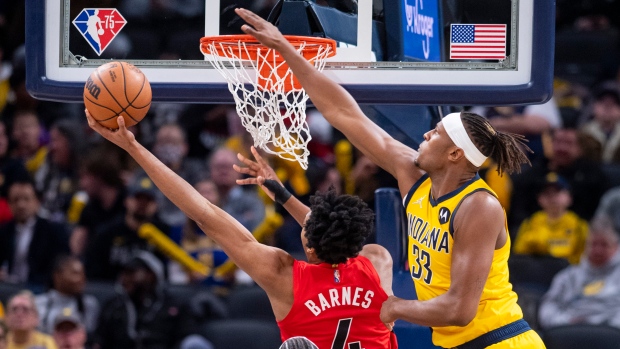 TORONTO – Scottie Barnes was nearing the end of his first long NBA road trip and he could feel it, even if he didn’t care to admit it afterwards.

In the span of 12 days, the Toronto Raptors played six games in six different cities, travelling nearly 9000 kilometres between four time zones. The final stop, a visit to Indianapolis for Friday evening’s contest against the Pacers, took a physical toll on Barnes.

The rookie absorbed and played through contact. He aggravated his sprained right thumb – an injury he sustained in Indiana a month ago, and one that cost him a couple games. He took a few hard falls, and by the end of a third-quarter run in which he scored 12 of his 17 points – including seven from the free throw line – he was visibly exhausted.

Hours later, Barnes and his team were en route back to Toronto, where they’ll start a seven-game home stand over the weekend and play 10 of their next 11 games. For the first time in nearly two weeks, Barnes will be able to sleep in his own bed. When he goes in for treatment on Saturday, he’ll do so in the organization’s own state of the art training facilities at OVO Centre.

How much is he looking forward to being back home?

“I am super excited,” he said, searching for the words to describe his elation.

After finishing the trip with a record of 2-4, capped off by their 114-97 loss in Indiana, the Raptors will reach the unofficial quarter mark of the season at 9-11. With an impressive comeback win over Memphis on Wednesday, they gave themselves a chance to earn a split on the road swing, but they learned a valuable lesson along the way.

The Grizzlies torched Toronto’s struggling defence in the first half the other night, scoring 71 points on 61 per cent shooting. Though the Raptors went on to outscore them 67-42 over the final 24 minutes and pull out the victory, that’s not a formula that will translate to many wins, especially against good teams on the road.

“We’re a young team and sometimes it’s hard to stress the urgency and what it takes to win in this league every night,” Fred VanVleet said after the 126-113 win over Memphis. “You can’t go out there and go through the motions or you’re gonna have a team put 71 [points] on you in the first half and then you’ll be fighting uphill. Luckily we were able to turn it around, but it’s not really the way we want to live going forward.”

A couple days later, the Raptors surrendered 66 first-half points to Indiana and allowed the Pacers to shoot 58 per cent. This time, there was no comeback.

It was an educational trip for the entire club. They took care of business against a bad Sacramento Kings team that fired its head coach a few days later. They were outplayed by a couple title contenders in losses to the Utah Jazz and Golden State Warriors. They mounted a big comeback, but also coughed up some big leads. They lost a close one in Portland, but were also on the wrong end of a few blowouts.

Good and bad, for a young team, these were all valuable learning experiences.

“I think any of the games, no matter what has gone on, or where or when or any of that stuff, are gonna be beneficial to this team,” said head coach Nick Nurse. “We just need games under our belt, but I also think this adds another dimension to it of going through some ups and downs on the road, even some ups and downs in the same game.”

“Learning lessons about hanging in there, learning lessons about getting off to better starts, we saw a little bit of everything on that road trip. It only really matters if we can learn [from] them, and we will learn them. It’s just a matter of how quickly you can put them into action once the ball goes up.”

The biggest and most important lesson should have come on the defensive end. Five of their six opponents scored at least 113 points and shot north of 48 per cent from the field. They allowed 117.3 points per 100 possessions on the trip, the fourth-worst mark in the NBA over that span.

If you go back even further, following their surprising 6-3 start to the season, the Raptors are the leagues 29th-ranked defence over the last 10 games. They’ve looked their best when they’ve been locked in defensively, flying around and using all their length, quickness and versatility to force turnovers and get out in transition. Unfortunately, those moments have been too few and far between, especially of late.

“I think that we've played a little up and down like a young team might,” Nurse said. “We’ve shown we can play some really good defence and we've shown if we're not engaged fully that we can not be so good defensively as well.”

“We’ve got to be that team,” said Pascal Siakam, who is starting to round back into form after returning from offseason shoulder surgery just before the trip. “We’ve got to be a team that plays hard every night, and when we don’t do that, if we don’t play harder than the other team, it’s tough to win.”

Injuries have not done them any favours; they haven’t had their full rotation available for a single game so far. Siakam missed 11 of the team’s first 13 contests. Shortly after he returned, OG Anunoby suffered a hip pointer that kept him out of five of the six games on the road trip. A nagging knee ailment cost Khem Birch the last two games, and five contests total this month. Yuta Watanabe finally made his season debut in Memphis, but sat out in Indiana as the team eases him back from his calf strain. Barnes re-injured his thumb on Friday, but said it was just a stinger and that he would be fine.

As if the injury report wasn’t long enough already, Gary Trent Jr. hurt his calf against the Pacers. He tired to play through it but eventually left for the locker room late in the fourth quarter. He’ll be evaluated when the team gets back home on Saturday.

“We’ll cross our fingers on Gary, but we've got to get some of these guys back,” said Nurse, who’s hopeful that Anunoby will be able to play when they open the home stand against Boston on Sunday. “It's just a little thin up front when you're missing three rotational guys. I know it's part of it, but we've got to get a little healthier and be able to maintain our advantage rebounding that we carved out when we were a little healthier… It's just energy, I think. Those guys are logging some [big minutes] and having more guys could help out with that, too.”

As for Barnes, he didn’t just learn how much to pack on a long trip, although he does list that among his primary takeaways. The talented rookie had the first mini slump of his young career, shooting 4-for-19 against Sacramento and Golden State, but he fought his way through it.

Since then, Barnes has scored 17 points in consecutive outings, shooting 13-for-23 against the Grizzlies and Pacers. He’s consistently finding ways to impact games, whether that’s with his scoring, his energy on defence, his rebounding, or his remarkable ability to see the floor and make plays for his teammates.

Barnes has come out of his this West Coast trip, and he’s better for it. Now, with some improved health and home cooking, the hope is that the rest of this Raptors team will be able to say the same.