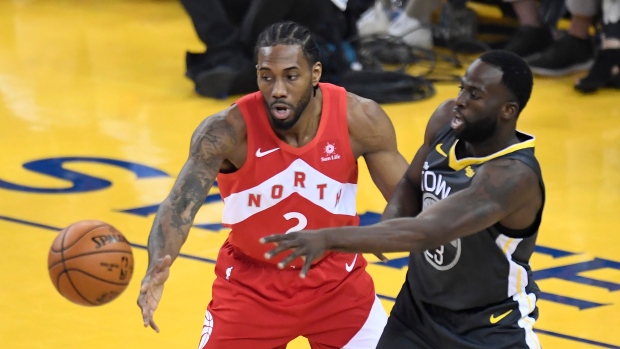 With the National Basketball Association on hold for the foreseeable future, TSN and Sportsnet are airing the entirety of the Toronto Raptors’ playoff run to the 2019 NBA title. You can watch Game 3 of the NBA Finals Thursday night on Sportsnet at 8pm ET/5pm PT.

Throughout the last several years of their dynasty, the Golden State Warriors have been known to thrive coming out of halftime. It was no different in Game 2 as they took down the Raptors 109-104 in Toronto to even the NBA Finals at one game apiece and snatch back home-court advantage.

Toronto won the first, second and fourth quarters, but were outscored 34-21 in the third thanks to an 18-0 Golden State run that saw eight straight missed shots and five turnovers coming out of halftime. The Raps led by double-digits at the break but their advantage turned into a 13-point deficit after just six minutes. The Raptors knew it was practically fatal.

"I feel like our pace was good early, it was just that third quarter, I feel like it just really killed us — 18-0 run, if we can't score no baskets, you're not going to win no game," superstar Kawhi Leonard said.

"Missing every shot doesn't help, 10 possessions in a row we didn't score, I'm not even sure," point guard Fred VanVleet said.

Outside of their third-quarter drought, the Raptors played well enough to win. After scoring 23 points on just 5-of-14 shooting in Game 1, Leonard bounced back with 34 while VanVleet turned in 17 off the bench for his second-highest scoring night of the playoffs.

If there’s one thing Toronto can look forward to, it’s the absence of Klay Thompson. The sharpshooter was forced out of Game 2 because of a mild left hamstring strain and will not play in Game 3. Neither will Kevin Durant, who is out again with a leg injury.

Still, the margin of error is practically zero playing against a team appearing in their fifth straight Finals. But the Raptors insist they’re looking ahead to Game 3 in the Bay Area.

"I don't know what you guys thought this series was going to look like, but we went into it expecting a dogfight. And, yes, we won Game 1. I think everybody else outside of our locker room was a lot more excited than we were. We understand what this team brings and what type of effort it's going to take to beat these guys,” VanVleet said.

"Obviously on somebody else's home floor, they got the sixth man with the crowd, but just have to buy into ourselves, and come out hard, strong, no mistake, no turnovers," Leonard said.

Even if they do all that, it still might not be enough.

Heading into Game 3, Golden State has a record of 45-8 – a winning percentage of .849 – at home over the last five years in the playoffs. They are 6-2 this year and have won five in a row following two first-round losses to the Los Angeles Clippers. Last season they were 10-1 and the season before they went 9-0. Both years ended in championships.

Head coach Nick Nurse knows it will be a challenge but told reporters the Raptors have to grab at least one game out west.

Here's what TSN Basketball Analysts had to say about Game 2:

“With Klay hurt and KD still out, Steph was a monster. He went off for 47 points, but the Raptors’ “janky” D made him work for everything… and it actually could’ve been worse. VanVleet did a good job getting into him in the 2nd half. So good, in fact, that he played 23 of the final 24 minutes. Gasol post-game: "Fred has a heart, I don't know how it fits into his chest. He has a huge heart."

“No Klay, still no KD, so this was a must win for the Raps! Even though we got to see the box-and-1 again, it didn’t slow down Steph who had a ridiculous performance, ending with a postseason career high 47 points! As incredible as Steph was, he got no help and in the end the Raps did exactly what they were supposed to do, steal one in the bay!”

“What a statement road win! Six double-figure scorers. Green, Lowry & VanVleet combine to go a crazy 14-25 from 3-point land. Steph Curry plays his heart out with 47 points, but without Klay, the Raptors did what they were supposed to do. All business.”

“There were so many crazy things to remember about this game. Simply put, shooters shoot, the board man gets paid, and Toronto steals a win on the road. It was big play after big play. Kawhi doing superstar things, Green’s chase-down block, Lowry’s five 3’s, Fred’s Hail Mary that deflated Oracle. Danny Green rose out of his slump to connect on 6 shots from downtown and Toronto was 2 games away from Larry.”

“Somebody wrote “let it rip” on the whiteboard before game 3...and boy did it work! All 5 starters were in double digits & the Raptors shot 52% from the field while  knocking down 17 3’s in a decisive win over a banged up Warriors team! Steph Curry dropped 47, but the drain of that heroic effort - vs. some “janky D” - will be felt in the games to come!”

“YAY Areeeeaa. For all the talk about the Raptors not being able to win at Oracle (RIP) because it was too hostile, it was as if the Raptors responded to the noise with a “what aren’t you understanding?”. They wanted all the smoke. It was such a balanced attack. They were immaculate from deep, shooing 44.7%. That Fred VanVleet game-clinching shot as the clock expired? Yeah, that hit different. Raptors are all about their business. I think that’s when a lot of us knew.”

“The "Pounce and Bounce" Game. The Raptors came in with hungry hearts and moist lips. Serious chance to pounce on the wounded warriors and the Raps seized the moment. They janked (new verb) more box-and-one against Steph who still scored 47 large. “Three the North” came up big -  17-of-38 from beyond the arc and the real Danny Green showed up, going 6-of-10 from deep. Norm Powell did not score a point in 6 minutes but may have had the biggest impact BEFORE the game in the tunnel. Reaching out to fist bump Kawhi - the Klaw started social distancing early and blew him off completely. It was awkward, but it wasn't mean spirited. It was just Kawhi's way of saying "F*** that - let's go". The ghost bump led to another Leonard 30-point performance and Norm's realization that sometimes it might be easier to high five a grizzly bear.”