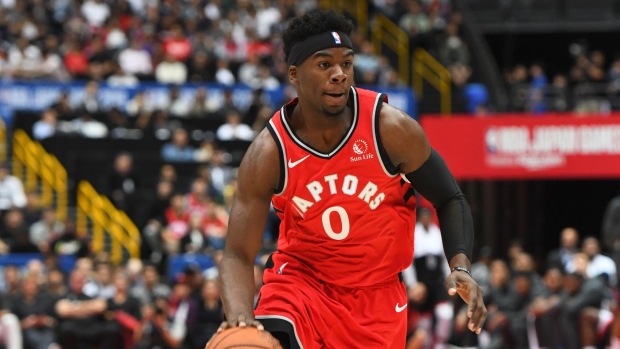 According to an NYPD statement, the victim visited Davis at the Beekman Hotel in the lower Manhattan area at 8:30 p.m. ET. The couple allegedly got into a verbal dispute, and the "subject hit the victim in the face." Davis then allegedly grabbed and broke the victim's phone, according to the statement.

According to a criminal complaint, the woman’s son was standing next to her when Davis hit her, causing the son to fall.

Davis was arraigned Wednesday on misdemeanour charges of assault, attempted assault, endangering the welfare of a child, criminal mischief, aggravated harassment and harassment.

Defence lawyer Greg Esposito said his client denies the charges and he declined further comment. Davis was released on his own recognizance and his next court date was set for Dec. 11.

The Raptors said Wednesday morning that they are "aware of the reports and are seeking more information."

The arrest was first reported by the New York Post.

Davis made headlines during the NBA's restart in the Walt Disney World bubble in Florida when a photo circulated on social media of him wearing a mask with a hole cut in it.

The mask photo made the rounds around the same time the NBA issued a threat of a fine or suspension for improper mask use in the bubble during the COVID-19 pandemic.

The 23-year-old from Southaven, Miss., played at Ole Miss before joining the Raptors as an undrafted free agent prior to the start of the 2019-20 season.

He averaged 7.5 points per game, and ranked fifth among rookies in three-point shooting percentage. He was named to the league's All-Rookie Second Team.

This report by The Canadian Press was first published Oct. 28, 2020.