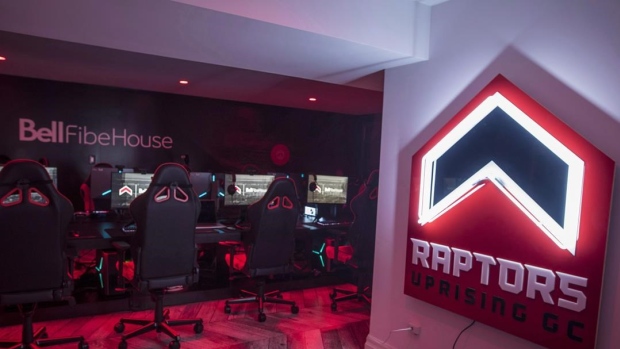 Knapp was an integral part of the Raptors' esports roster, combining with star point guard Kenneth (Kenny Got Work) Hailey and lockdown defender Trent (Timelycook) Donald in a record-breaking campaign.

Hailey was named league MVP and first-team all-star alongside Knapp, while Donald was voted Defensive Player of the Year and was voted to the second all-star team. Hailey and Donald were also named to the league's all-defensive team.

But despite setting a slew of records in going 16-0 during the regular season and winning two tournaments along the way, Toronto came up short in the playoffs. It dispatched Vescovi and the Hornets in the quarterfinals before losing to eventual champion Wizards District Gaming in the semis.

"We definitely had a good thing going and I don't think anybody would have questioned us bringing that whole team back together,'" said Shane Talbot, esports manager for Maple Leaf Sports and Entertainment. "But we weren't about to rest on our laurels."

"We did have great chemistry. You have to have the season that we had," he added. "But chemistry is iterative, it comes and goes," he added. "And obviously we lost in the semifinals.

"And with Type, you're getting an absolute elite centre. He hasn't had quite as much (talent) as he will next season around him. So we think that the combination of Kenny, Timely and Type will be just undoubtedly the hardest defence to play against in the league."

Vescovi was voted to the league's all defensive team in 2019.

"I see a whole lot of defence. This shall be a fun year. Instant chemistry. Only one goal in mind," Vescovi tweeted.

Vescovi and Knapp are both comfortable moving the ball and can play provider. Their statistics last season are almost a mirror image of each other.

Vescovi averaged 13.4 points, 12.1 rebounds, 6.1 assists, 2.7 steals and 3.0 blocks in 29 regular-season games last season. He ranked seventh overall in steals and 12th in rebounds per game, while leading the league in blocks per game during the regular season.

Knapp averaged 14.3 points, 12.9 rebounds, 6.8 assists and 2.7 blocks in 36 regular-season games. He ranked seventh overall in rebounds and blocks per game, 11th in field-goal percentage and within the top 25 for assists.

At 23, Vescovi is five years younger than Knapp.

And while the two share qualities, Vescovi is a little more aggressive than Knapp, according to Talbot — "and that's going to be very welcomed on our team next year on offence."

In July, Vescovi was suspended for an unspecified violation of the league's player code of conduct. The Indianapolis native missed The Turn tournament and a regular-season game.

"Every player has strengths and weaknesses and Type is very aware of where he's gone wrong in the past," said Talbot.

The Raptors' took a chance on Donald in the 2020 draft after he sat out the 2019 season through suspension for another player code of conduct violation while with Kings Guard Gaming. Donald turned out to be a steal.

"We're confident that we're coming into this trade eyes wide-open and are making a savvy move again," said Talbot.

Originally drafted in the fourth round (52nd overall) in 2018 by Warriors Gaming Squad, Vescovi won MVP honours in the 2019 Turn tournament. He went to Charlotte first overall in the expansion draft.

Knapp was drafted in the second round (19th overall) of the 2018 draft by Cavs Legion GC. The native of Verona, N.J., joined Toronto midway through the 2019 season in a deal that sent Trevion (All Hail Trey) Hendrix to Cleveland.

"One door closes and another one opens," tweeted Knapp, who thanked the Raptors for his time with the team.

Knapp's younger brother Jake (Legit 973) Knapp was also a member of Raptors Uprising last season but his rights have not been retained by Toronto.

The Hornets finished eighth in the 23-team league last season with a 9-7 record.

This report by The Canadian Press was first published Nov. 14, 2020