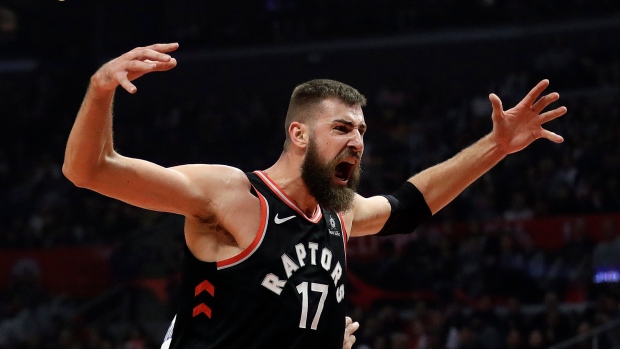 Toronto Raptors centre Jonas Valanciunas is expected to play Thusday against the Atlanta Hawks after missing the last 25 games recovering from a dislocated thumb.

He was originally injured on Dec. 12 in the second quarter against the Golden State Warriors after a collision with Draymond Green and left the game. He later underwent surgery to repair the thumb.

Prior to the injury, Valanciunas was enjoying a career-high 12.8 points per game (tied with 2015-16) this season and a .575 field goal percentage.

He has been linked to trade rumours this week, but said Thursday he hopes to stay in Toronto.

"I've been in rumours so many times I don't even look at it," Valanciunas said. "I just know one thing, we have a good team, we have a good future in front of us. I just want to go on the court and play ball and win games. I love Toronto and I want to stay here."

SInce Dec.14, the Raptors are 16-9 without Valaciunas in the lineup and are second in the Eastern Conference.

Valanciunas, 26, was drafted by the Raptors in the first round (fifth overall) of the 2011 NBA entry draft and is in his seventh season with the team.