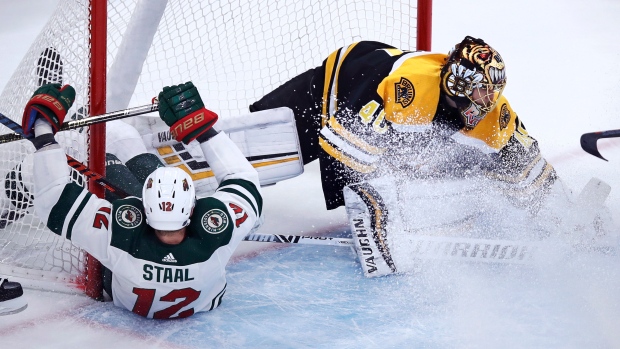 BOSTON — Tuukka Rask was happy to share the credit after his first shutout of the season.

The veteran goalie stopped 24 shots for his 250th career win as the Boston Bruins beat the Minnesota Wild 4-0 on Tuesday night.

"Our team defence the past few games has been very good and I think it shows on the scoreboard and in the points," Rask said. "We're eliminating the offence of the opposing team very well and then getting rewarded at the other end. That's a great sign."

The Wild, who played Monday night in Montreal, managed just six shots in the first period and never recovered after Boston took a 2-0 lead on goals by Heinen and Marchand.

"You could tell that there was a little bit of fatigue," Minnesota coach Bruce Boudreau said. "They had a good game plan. They came out right after us."

Rask earned his first shutout since blanking Tampa Bay on the road last March 17. He wasn't tested often, but did come up with a big glove save on Eric Staal with 5:42 left in the first. After stopping 12 more shots in the second period, Rask faced only seven from the weary Wild in the third and completed his 42nd career shutout.

"I've been lucky enough to be part of good teams," Rask said. "That's pretty much what it comes down to, I think. I've been fortunate to play here."

Boston jumped on Minnesota early and never let the Wild get much going offensively.

Heinen tipped in Moore's shot from the point 5:23 into the game and Marchand scored from nearly the same spot on a rebound off the end boards after a shot by Bergeron with 8:31 left in the period.

DeBrusk added a power-play goal with 45 seconds left in the first when the puck bounced off his chest. The assists went to Bergeron and Marchand, who combined again for Boston's next goal.

Minnesota's Zach Parise was called for tripping 6:05 into the second and the Bruins scored just 19 seconds into the power play when a shot by Marchand glanced off Bergeron's skate into the net.

Bergeron was credited with the goal, while Marchand and Krug both picked up their second assist of the night.

"Sometimes the puck luck comes in cycles and we'll take it," Bergeron said. "We got the bounces, but I thought we played really strong — especially early in the game. We were on the puck and creating our chances."

The Wild, playing the second night of back-to-back games, wrapped up a 3-1 road trip.

"We're not going to make excuses. We've played some good teams," Staal said. "When you get behind against a solid team like the Bruins, it's going to be a tough night. We just didn't have enough momentum to carry us through."

NOTES: Boston D Charlie McAvoy missed his sixth straight game with a lower-body injury. ... Stalock got the start for Devan Dubnyk, who made 32 saves Monday night at Montreal for his first shutout of the season. Dubnyk will represent the Wild at the All-Star Game for the third time in four seasons. ... The Wild fell to 8-4 in Boston.