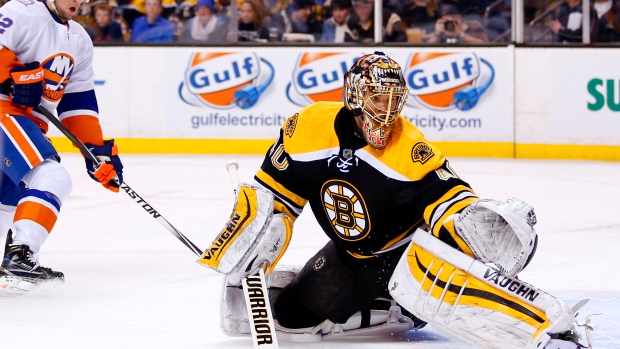 BOSTON - Loui Eriksson quickly found a puck near his skates and Tuukka Rask seemed to see every shot all night.

Eriksson scored the go-ahead goal with 7:34 left in the third period and Rask stopped 39 shots to lift the surging Boston Bruins to a 2-1 victory over the New York Islanders on Saturday night for their ninth win in 12 games.

"It's one of many lately," Bruins coach Claude Julien said of Rask's night. "He's been in a zone, really good for us and focused and intense. He's not afraid to yell at the players around him if they're not doing their job. He's just been a determined athlete for us the last little while. It's made a big difference for our hockey team."

Patrice Bergeron added a first-period, power-play goal for the Bruins, who have collected points in 14 of their last 16 games (10-2-4).

The red-hot Bruins now have a showdown with rival Montreal on Sunday night. Rask has been carrying a heavy load of games lately, but didn't say if he'll be facing the Canadiens, who have beaten Boston all three times this season after eliminating them in seven games in last spring's playoffs.

"If they want me to play, I'll play," he said. "It doesn't matter to me. Nobody's told me otherwise, so I'm sure I'll be playing. Hopefully I'll get a win so I don't have to answer any questions."

John Tavares had a power-play goal for the Islanders, who have lost four of five. Former Bruin Chad Johnson made 34 saves.

"I'm really just proud of the effort we had in here tonight," Islanders coach Jack Capuano said. "We played a solid game against a good hockey team. We had some chances, but we have to find a way to score some goals."

Eriksson scored the winner out of a scramble in front when he spun around and sent a backhand shot under Johnson's left arm.

The teams traded first-period power-play goals, but were scoreless in the second in a contest that featured many good scoring chances and plenty of open-ice breakouts.

Tavares one-timed a rebound past Rask from the bottom of the left circle 9:06 into the game for his team-leading 24th goal.

But that's all they could get against Rask.

"It's tough to win when you score one or two against these guys," Islanders defenceman and former Bruin Johnny Boychuk said.

Bergeron tied it 4:06 later when he collected Michael Grabner's errant clearing pass in the slot and fired a wrister over Johnson, who was on his stomach after making a save on a shot.

Both goaltenders made nice stops early in the second. Rask flashed his left pad, robbing Anders Lee's close bid, and Johnson made two good saves on Carl Soderberg, who cut in front for a shot and turned and had a rebound chance.

The Bruins had an excellent scoring chance early in the third, but Daniel Paille's backhander sailed over the wide-open side of the net to Johnson's left at the end of a 2-on-1 break.

Seconds later, the Islanders went on a power play after Brad Marchand was whistled for high sticking, but Rask made a few stops to keep it tied.

NOTES: New York D Calvin De Haan went to the locker room after getting hit along the boards in the third. ... The Islanders came in leading the league with 16 road victories. ... It was the final regular-season meeting between the clubs. Boston won two of three.