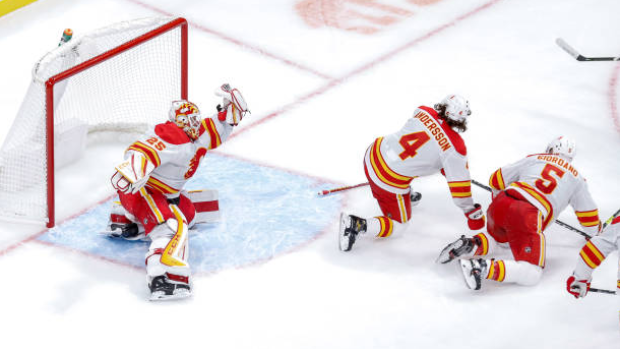 Andersson did not offer any further detail on the meeting, which came after centre Sean Monahan said the team lacked emotion in their 4-2 loss to the Montreal Canadiens on Thursday night.

Should note that the Calgary Flames' practice today @ the Bell Centre was fairly light-hearted, ending in a fun shootout. https://t.co/B5csciTXPF

"I just think we lacked some emotion," Monahan said postgame. "We've got to be invested emotionally in games and when that's lacking, it's tough to get momentum.

"We've got to play for each other. We have a tight team, so we have to regroup here real quick. We've got to be invested a lot harder and play harder. When you do that, when you're playing for each other, that's when you get results."

Thursday's loss dropped the Flames to 2-3-1 on the early season, leaving them sixth out of seven teams in the North Division.

Flames head coach Geoff Ward said Thursday night the team needs to find a way to "garner emotion" with no fans in the crowd.

"Sometimes the crowd gets you going, but with the lack of crowd, you've got to find things in order to try and generate that emotion, especially when you're behind, whether it be a big shot block or taking a hit to make a play, finishing a big hit, having a good shift in the o-zone," said Ward. "There's little moments where you have to generate emotions as a team."

The Flames will face the Canadiens again Saturday night in Montreal before heading to Winnipeg for three straight games against the Jets.