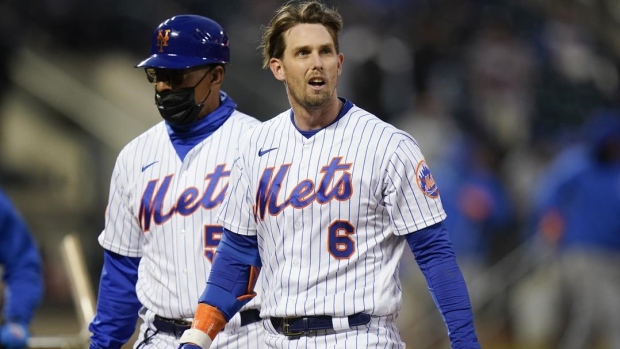 NEW YORK (AP) — The New York Mets lost All-Star second baseman Jeff McNeil to body cramps and center fielder Albert Almora Jr. after a vicious crash with the outfield wall during a game against the Baltimore Orioles on Tuesday night.

McNeil lined his second hit of the game off starter John Means with two outs in the third inning and tried to beat center fielder Cedric Mullins' throw to second. He slowed down about halfway between first and second and was out by several steps.

McNeil lifted his average to .234 this season as he's gradually pulled out of an early slump.

Last Friday, the 29-year-old McNeil appeared to get into a dugout scuffle with double-play partner Francisco Lindor — a moment Lindor tried to dismiss as a debate about rats and raccoons.

Almora tracked Austin Hays' rocket to the warning track in center and had the ball in his glove when he slammed face-first into the wall. His head left an indention on the padded fencing.

The ball fell out of his mitt, and Almora crashed to the warning track, where he remained face down for over a minute.

With the help of a trainer, he picked himself up and walked off under his own power to applause from fans at Citi Field.