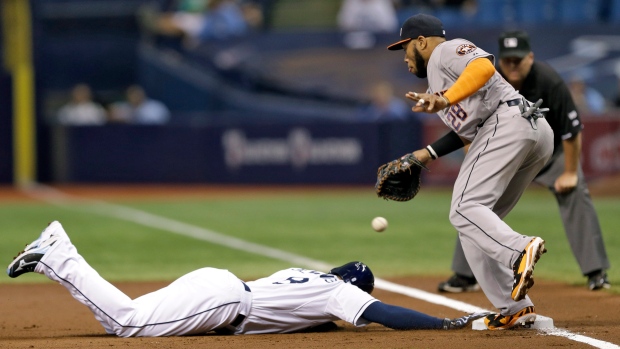 (SportsNetwork.com) - The Tampa Bay Rays have had a rough few weeks in June, but will look to close out a three-game home series against the Houston Astros on a high note at Tropicana Field.

They'll have to deal with Dallas Keuchel, though, who takes the mound for Houston as one of the more accomplished pitchers in the American League this season.

Keuchel sports an 8-4 record coming into the matchup, and has pitched to an impressive 2.63 earned run average. The 26-year-old also has a 1.06 WHIP through 14 starts on the year, and has held opponents to a mere .226 batting average.

The lefty was dinged a bit in his last outing, however, in which he was tagged with a loss. He lasted just five innings against the Nationals Tuesday and surrendered six hits with four earned runs, four strikeouts and four walks. The four free passes he issued Tuesday were a season high.

The Rays will trot Erik Bedard to the mound for the start. Bedard has been on the other end of the spectrum, having picked up four losses in his last six outings. He comes in with a 3-5 record and a 4.33 ERA in 12 games started for the Rays.

In Bedard's last five starts, he's made it out of the fifth inning once - a win against the Mariners on June 6, where he pitched six innings. His most recent trip to the mound was a four-inning stint in which he gave up five runs on four hits, struck out three and picked up yet another loss.

Odorizzi and two other Rays pitchers combined to hold Houston to one hit on the afternoon.

Jake Buchanan, who made his major league debut Saturday in a spot start for Brad Peacock, was credited with the loss after struggling a bit. He lasted 4 1/3 innings and gave up eight hits and five earned runs.

Jose Altuve entered the game as the American League leader in hits with 101, and was the only Astros player to register a hit in the contest.

James Loney took advantage of five at-bats for Tampa Bay. The first baseman recorded two hits and a team-high three RBI in the win. Desmond Jennings and Ryan Hanigan each added two hits for the Rays.

"That's the kind of game we're capable of, absolutely," Tampa Bay manager Joe Maddon said. "We finally got the hits when we needed them and the pitching was outstanding. Jake was really good."

Tampa Bay took two of three last weekend against Houston, and the team will look to do the same Sunday with a win.